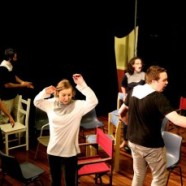 The Chairs – SUDS at the Sydney Fringe. (Theatre Review)

SUDS at The Sydney Fringe Festival

23 September to 26 September – You can grab tickets here.

No fringe festival would be complete without the local university dramatic society giving us a non-Shakespearean classic. It’s surely one of the staples of any fringe festival, and a chance for a classic to be openly experimented with by our treasured, up and coming theatre creatives. Sometimes these shows work, and mostly they don’t, but that doesn’t matter at Fringe, because ambition, scope and a mutual passion for local creativity are what drive these shows, and it can be as much fun sitting in a theatre space awkwardly bonding with your neighbor over a squirming discomfort as it is over a moment of inspirational joy. Fortunately for Sydney-siders, this version of Ionesco’s The Chairs is a great production, wonderfully performed, and every bit as exciting as the main stream theatre we’re usually presented with. It evokes the spirit of underground theatre, the creatively impassioned walking through the Newtown streets at night to sit before an interpretation of a great artist who  bucks scandalously against today’s trend of polished theatre productions designed to pamper Sydney’s bourgeoisie. Theatre of the absurd should be performed lo-fi. Surely! And with a tragic farce like The Chairs, density threatens to overwhelm if it isn’t grasped with two hands and shaken till its guts rattle. This is what director Clemence Williams has come up with in this current production, a version of the great play, rattled and plummeted not only for its value in the active participatory witness of the audience, but its impact on theatre itself. This is a bold production of The Chairs that examines the play along side producing an exciting interpretation of it.

First interesting tid-bit is that Williams has three couples performing the core relationship, which according to Williams’ director notes, creates three parallel universes. In the space at 5 Eliza, this means one couple (a lesbian couple) perform in the entry hall to the building, another couple (a gay male couple) perform in a upstairs secondary space and the third couple (a very youthful looking hetro couple) perform in the main stage area. The play starts with the couple downstairs, and while it might take a little time to get your head around what’s going on, the audience are invited to move between the three performances, passing through large looking-glass style doorways to get to each. The starts are broken up by about two to three minutes, so eventually one cottons on to the idea you can start with a version of the play downstairs, and follow the dialogue as it moves through each of the relationships. Williams’ has the couples performing each version of the play quite differently, and because of the intrinsic heterosexuality of the play, watching the couple go through their paces in alternate contexts works very well and becomes quite exciting. Performers also regularly make eye contact with the audience, which engages us in the establishing of a much-needed fourth wall in a production about societal alienation, the problems of memory and the post-apocalyptic relationship with the abyss of nothingness,  so you can’t have the audience thinking they have “become” the missing guests – which was my main concern with the style. But that never happens, and it was thrilling watching the audience make their own play as we shuffled between and at times got very much in the way of, the performances.

And what great performances they are. Hannah Cox and Julia Robertson are a rather sophisticated “man” and “woman”, playing a Freudian hysteria into the (wo)man and his childish attachment to woman, who he converts to mother and father roles throughout The Chairs. Their performed relationship is the strongest counterpoint to the roles that Ionesco sets up, achieving what I wold have thought was the impossible, making Ionesco appear a little conservative in his values. The performances are impassioned and the most surreal of the collection, possibly because they are the relationship we least identify with culturally – but don’t pin me down on that one. The audience stands above them on a staircase, as they packed all their chairs into the entrance hall, preparing for the great banquet of unseen guests who never really arrive, which ads to the surreal intentions of Ionesco and creates a sense of the cast disappearing down a tunnel. Through all this as well as an audience moving up and down the staircase in front of them, they hold the power of the play inside themselves so clearly one is never tempted to stray from the power of the words – a remarkable accomplishment. Indeed, all the performers should be commended for their grasp of the words, working through their paces deliberately despite all the movement in front of them.

Chenier Moore and Jack Scott form the second couple, a counterpoint to the all woman relationship downstairs, this one is an all man affair, and again brings a fascinating study of Ionesco’s original couple to the fore. For me, moving between the three couples, meant starting with the female relationship downstairs, moving into the male relationship then moving to the heterosexual one, giving a remarkably unique view of an important cultural couple from the multiple vantage points. Moore and Scott are the most convincing couple, playing the role in a more domestic capacity than the other two performances, much of the pomp and splendour of the banquet floating away in the prevailing nature of their domesticity. This transformation of the words was fascinating, as I said above, examining The Chairs for its contribution to the way we see relationships, highlighting the importance of partnership in absurdity, something I was previously unaware of in The Chairs and may or may not be Ionesco’s point, who seems to use relationship as an emblem of the stagnant conformity of the couple, when watching Chenier Moore and Jack Scott (and the other couples) the converse becomes true. That relationship may be the vehicle for reason or at least the place of a deep and profound joy in the face of our overwhelming absurdity. All this is transformed again, by the heavily stylised performances of Jack Ballhausen and Geneva Gilmour, who play the man and woman more to the traditions of Ionesco and therefore they appear as side-by-side victims of the absurdity of life rather than achieving a co-conspiritorial front that the other two seemed to grasp. When the orator (Finn Davis who has a great face for this role when made up) does arrive, and he is the sublime combination of the ridiculous we can’t understand and the spiritual ecstasy that we assume to have an understanding beyond us, it is more to this couple that he speaks, the other two seemingly to have found their salvation in their own connection.

At least, that is some of what I got out of this exciting, brave production. All in all Clemence Williams has done a great job here, keeping her inner critic at bay in order for her creative side to really come up with something thrilling to be a part of. The Chairs is another Imogen Gardam produced work (like Procne and Tereus) and again, its one of the shows at The Sydney Fringe that shouldn’t be missed.