Four Places – The Agony and Ecstasy of Family. (Theatre Review)

Posted by lisathatcher on August 4, 2014 in Theatre | Leave a comment

Tap Gallery from July 29 to August 10. You can grab tickets here.

Once upon a time, the children rising up in a mutinous power play against aged, mentally fragile parents was seen as an illicit act of deceit, a grab for the parental asset stash at the least and a Freudian usurping at its worst. Shakespeare wrote a whole play about it called King Lear. It isn’t something that is new, now that people are living longer with more deteriorated mental faculties, it is an age-old battle that rear’s it’s ugly head with every generation forming its own morality around a favoring or parents or children depending on current trends. But there is something about the family that just has to be annihilated. People claim the family is where you are most down to earth, never allowed to get too big for your boots, but in fact, it is the only place where you are never allowed to develop past your label as “child” or “mother” etc, and  where you must always comply with its unwritten rules, not to mention its clearly articulated ones. respect for one’s parents may not be as socially sanctioned in our westernised culture as it is in some, but it is still assumed a child needs to cut their parents a certain amount of slack, because no matter how wonderful la child you may have been, they did more for you than you will ever be able to do for them, so you live un perpetual emotional debt. even stronger than this is the reverse bond – it is the worst sort of offense when parents are cruel or neglectful to their children, an obligation that may be said to diminish, but no parent ever feels properly free from. Death is the only escape from these obligation and though we shroud ourselves in love and warmth and “decency” when we engage with our parents, children and siblings, the family is the only place where you are never, really permitted to be a lone self. There is no self in the family. You all even look like each other.

Of course muddled in with all of this psychic stuff is the love. The great overwhelming love we feel for these people with whom we share a special bond. But given the amount of theatre, books and films devoted to the complexities in family life, it is foolish to imagine the love gets us through everything undamaged. Sometimes, the love just keeps us in the firing range. 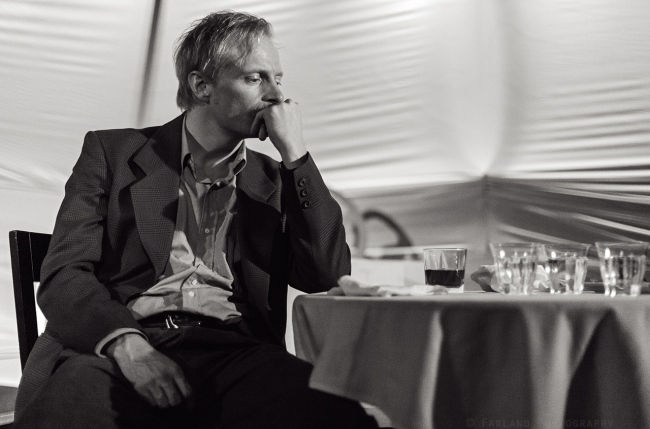 So now, to the long history of literature centered around the family, comes the tragically witty Four Places by Joel Drake Johnson. At the centre of a family storm is Peggy (Kim Hillas) a woman quite detached from the power of her roles as wife and mother, a self-confessed coward who could never act with the courage of her convictions, rather meander gently through life doing her best for all concerned. This person she is has brought a lot of pain into her life, that despite all her questions of “what’s going on” is actually quite good at sublimation. We meet her as she is about to go to a scheduled lunch with her daughter Ellen (Amanda Stephens Lee) but when she gets to the car, her son Warren (Jeremy Waters) is there and her suspicions are raised. She gets in the car with her two kids, leaving her slowly dying, pain-laden husband alone with the nurse. In the car, she will do what she has always done; try to needle out a truth she already knows in a sideways sort of tip toeing discussion that assists the avoidance of confrontation. But today, her favorite restaurant may not be the best place to avoid the issues she wished she didn’t have to face, and all this lack of confrontation might be too difficult for her children.

Four Places is a deceptively low-key production by director Nicholas Hope, that keeps the spirit of the interactions between the characters in a horrifyingly realistic state. Sometimes it’s easier to deal with the yelling and shouting of passionate drama – at least all the stuff gets out there – but in Nicholas Hope’s Four Places, everything sits at the surface with a menace that threatens to explode into something unholy rather than cathartic. It’s a witty script, but as tensions rise the wit becomes more like a social mask. Jeremy Waters is particularly good as Warren, a seething undercurrent laying dormant with no tell-tale signs of impending explosion. Waters plays Warren with a vacant stare, disengaged yet writhing with a frustration that will force itself out upon any subject that happens to be in the way. He is having another great year – it has to be said – playing men struggling to find their place, and here he imbues Warren with a lack of self-awareness that is quite chilling, conveying the idea that sometimes good men can become cruel when they don’t understand. Along side Waters, is Amanda Stephens Lee as the female counterpart, Warren’s sister Ellen, the woman sublimating her grief and her fear behind beautiful clothes and her face set in a serene mask. She is the great white hope, the bright child in whom the family invested time and money. It;s no surprise she studied psychology and like the stereotype, puts other fractured souls together while living in denial over her own. she is the quintessential dutiful daughter, but she has a very different approach to death than her mother. 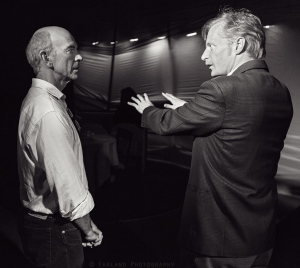 Kim Hillas is an understated Peggy, playing her role deceptively down, like many mothers, naturally evoking a victims sympathy when we can tell by her children she has ruled the roost without claiming to do so. We naturally feel for Peggy in Four Places, but Hillas plays her as an insipid passionless woman, frustrated to the point where the only action she will take is to smash her own dinner plates, a female cuckold to a husband who may lover her ardently, but has no problem wounding her deeply. But then she’s been married for over fifty years. Whose to say what love like that should look like? Rounding out the cast is the mysterious Briony Williams as Barb, a woman with her own hidden secrets, who hides them all under a facade of efficiency and forced kindness. All together the cast make a very funny team, despite the seriousness of the subject matter, making the most of some very funny dialogue.

A shout out has to be made about the stupendous set at Tap Gallery by master craftsman Tom Bannerman. I’ve never seen the Tap look so good, this stage has a revolve, seamlessly converting a car into a table in a restaurant. It’s clever and beautifully incorporated into the play. Four Places is a directional debut for actor Nicholas Hope, but with such a carefully thought out production, it won’t be the last.