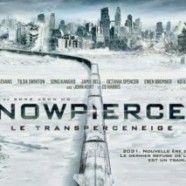 It has taken me more than a month to write my Snowpiercer review. It’s one of those moments where I can’t tell if it’s the film or me. It unapologetically taps into a cult film aesthetic, but it works so damn hard to tap into a cult film aesthetic, that it calls forth an internal resistance that makes me want to toss it aside with full force. Yet, certain elements – its perverse stupidity, Tilda Swinton’s teeth, Alison Pills awesome one-act domination, John Hurts double-edged nice guy against Ed Harris, its refusal to adhere to traditional story line elements – work so well, it almost saves the Boog Joon-ho’s first English language effort from white washing itself in try-hard. It’s a deeply silly film, made without any effort at seriousness, and this is probably where its salvation lies, because even as a cult film, it doesn’t take itself too seriously.

I found the first thirty minutes were the most tiresome, with a ludicrous premise that takes a third of the film to get over. The on board story is far more interesting than the idea of the dregs of humanity speeding around the frozen planet in a train.  Snowpercier does have some brains, which means if you can get over the idea that with only about three hundred and fifty people left alive in the entire world, the first thing they needed to do is separate rich from poor with violence, which is too stupid an idea with such a small central population, to deal with, then the film does get into a groove that is entertaining and reaches it’s own conclusions that go a long way in justifying the whole silly thing. If you can get past the first third, you will probably end up having a better time than expected. Snowpiercer is based on a 1980’s French Graphic novel,  Le Transperceneige, and is made by Bong Joon-ho, who had great success with The Host, so my assumptions that it all might be over my head are probably accurate. What is great to see is a sci-fi blockbuster made with indie/art house feel and budget, so aside from its oddities, there is enough about it to excite the non-target audience, and regular cinema goer who maybe want to see what all the fuss is about. 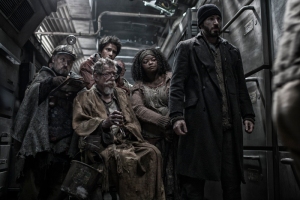 Chris “Captain America” Evans (who gave me temporary narcolepsy as the titular super hero) is Curtis, a passenger on The Snowpiercer, a super train built by Wilford (Ed Harris) to keep the very small remaining population rocketing around the earth in order to stay warm enough to survive a global freeze that was a science experiments in combating global warming gone wrong. (That concept was rather funny) The Snowpiercer is propelled by a perpetual motion machine, run and maintained at the front of the train by Wilford himself. The train is divided into a financially based class system, with the “have’s” at the front and the “have not’s” trapped in a overcroweded final carriage, forced to eat gel like bricks made of bugs. Why this divide has been imposed is never explained, which does give the film some brains, tapping into socialist theory that the deprived poor need to exist so that wealth can have value. How do you know you are rich if there are no poor to envy you? It is within the detail of the running of the train, the obvious sub plot of the have not’s wanting to take that which they envy that the silly details come in to strip the plot of any attempt at viability, but one must concede any pretensions to viability were always very thin indeed. The film crams in so many ideas, the bulk of which are so odd ball and weird, without follow through (a man loses an arm in rather horrific circumstances purely so that we can see a man lose an arm in rather horrific circumstances) it becomes a montage of imagination rather than some attempt at central theme driven message. Appreciated on that level, for what it appears to be in the purely visual sense, it essentially becomes a masterpiece. One can almost hear Bong Joon-ho saying I had this awesome dream and I turned it into a film.

Curtis (Chris Evans) is thirty-four and been on the train since he was a child, and he’s getting itchy for something other than those gel bricks. There’s a vague “chosen one” message around him, but eventually enough horrible things happen to jolt him into action, which is encouraged by John Hurt whose comments are so abstruse he may as well be one of the people speaking Korean. A mutiny on the Snowpiercer ensues and the rebels fight and slaughter their way to the front of the train, only to be confronted with how Wilford is using the children he’s been stealing from the poor. 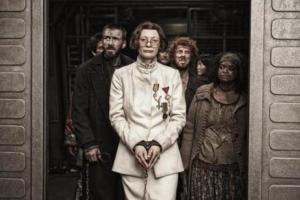 The films strengths are in the perverse pleasures it takes in its certain little in-jokes: A very Korean film headlined by Captain America, Tilda Swinton with appalling teeth happens to be very British and a parody of Margaret Thatcher, which in its own way is having a bit of a go at Meryl Streep, the amazing production design by Ondřej Nekvasil which is its own special brand of awesomeness, Ninja style warriors wearing hoods that reference a Lady Gaga video and so on. The film settles in on Song Kang-ho as Namgoong Minsu and Go Ah-sung as Yona, familiar faces from The Host, but it loses some of its campiness, and swerves a little too much toward a semi-seriousness that teeters on the edge of a problem. It’s agitprop left-wing message is so hyper-realised it becomes an anti-message, which is its own message, and that little trail carries a lot of rewards in Snowpiercer if you’re willing to follow the Cheshire Cat’s smile down that hole. It does seem to be overtly political, but it so distorts the passions of the “right” and the passions of the “left” that we’re left in a muddle of a free-for-all that can be read as a refusal of political establishments, which is another little piece of awesome.

So there you have it. Snowpiercer is the kind of film that makes me very happy I don’t have a rating system on my blog. I can’t even tell if I liked it or not.