Home » Theatre » Food – Steve Rodgers and that which we consume. (Theatre Review)

Food – Steve Rodgers and that which we consume. (Theatre Review)

Posted by lisathatcher on July 4, 2014 in Theatre | Leave a comment 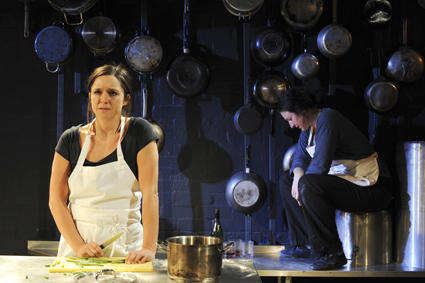 You are what you eat. Or are you what eats away at you?

In Food, Steve Rodgers examines our two most basic endurance needs, food and sex, bringing them together around an examination of personal history, asserting that what we have consumed forges who we are through our memory and it’s interpretation. It’s a highly provocative piece of theatre, with dance and movement a central component of Rodgers vision of reality, the way that our simple survival has extended itself into the narrative of our lives as something that extends far beyond that which connects us with other life forms. Human creatures may be remarkably close to other creatures on the planet percentage wise, but it is those miniscule differences that forge the greatest impact, and are easily the most interesting. We may be apes, but the ways we are not apes is where the human creature exists.

Two women, sisters, run a highway diner together. they spend they’re days bickering over the top of a loyal love for each other, keeping each other trapped in their history, even as they write their lives together. When they decide to extend their business away from the familiar safety of the chiko roll toward something more creatively self-expressed, they take on the challenge of an additional worker, an immigrant male, who makes his way into their strange nest, bringing with him a new passion for life, love and expression that awakens their lust, their curiosity and a future filled with possibility. One of the charming undertones of Food is the benefit to white Australia of the immigrant presence, their culture and their perspective as a liberating companionship, shaking white Australia out of its desperate fear of cultural annihilation. Sex and food unite, but they don’t obliterate. Each ingredient’s unique flavour is enhanced when something original is made out of new combinations. It is this and other subtle undertones in Food that carry the gems of the production, and provide a cultural meal rather than a piece of mindless entertainment.

Force Majeure is a movement company, and Steve Rodgers includes intense physical representations to carry narrative. Food opens with Emma Jackson singing in the shower, her voice, her movements, the spotlight all tell us everything about her, so that when her sister, played by Mel King is constantly in response to the perpetually swelling sexuality, we understand without being told. If the smouldering nerve endings in a human can be an invitation to some, to others it is a barrier. Emma Jackson’s sexuality and its associated problems and complications are perfectly portrayed by Steve Rodgers both through the journey into memory as well as in the woman’s relationship to herself and her past. All three characters (Fayssal Bazzi plays an immigrant worker who turns the lives of the sisters upside down) are different sexually, and each respond to the enormity and nothingness of sexuality in different ways. Memory is a thing that hovers around, reflected in pots and pans, movement, response and, in a very funny moment, a slide show. Memory is past and present, creating future. We exist with the sisters in their day, and yet the tall set, pots and pans and dripping water, loom over the action, as if anything other than the past must be obliterated. As if God were a thing we built from our fear, here to protect us from our future.

These are all strong performances, actors in touch with their characters and deeply connected to each other. Bazzi arrives like a burst of something entirely new, and disappears with the same significance. He is almost a caricature, a symbol, signpost or helping hand, dragging something no one knew needed to be found, out of the sisters so that they can choose a different existence to the one forged from the past. His is a gentle, very funny, happy performance. Emma Jackson is another symbol of sorts, an emblem of societies confusion about sexually alive women. Rodgers gives her a great character with a lot to reveal about the difficulties heterosexual females experience in a world that still essentially hates them. If we can easily forgive misogynists, we can never forgive the women who love them – much less the women who fuck them. Mel King acts as a protagonist of sorts, a woman who sits sidelined by her pursued sister, and yet scrambling to forge something unique from herself even as her fear confines her to mute observer, food maker, food eater. Like all of us, she loves and hates her sister, constantly trying to understand how she can exist next to something so obviously enormous. Each sister struggles with her personal tragedy alone, as each sister equally struggles to bring the other into her world.

Food is an interesting production, entertaining, visually stimulating, and delicately performed. It’s an experience of gentle beauty. The touring production in 2014 is directed by Kate Champion and Steve Rodgers. You can find the schedule here.

← The Mercy Seat – Who are we when the world falls apart? (Theatre Review) Book of Days – Interview with director Elsie Edgerton-Till (Theatre Intereview) →