Posted by lisathatcher on June 10, 2014 in Film Reviews | Leave a comment 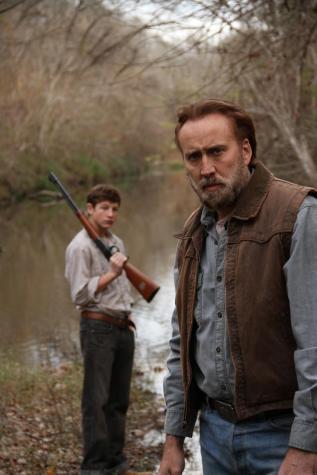 Joe  is now showing at the Sydney Film Festival

There is something quite off about this film. Is it the contrived attempts by David Gordon Green to enlist “locals” to include “authenticity” only to line by line direct them out of any sort of naturalism? Is the pointless acts of extreme violence such as allowing two dogs to maul until one is dead for no reason? Is it the use of a homeless man as one of the key performers, who subsequently drinks himself to death before the film is released? Is it the tiresome obsession American’s have with Mark Twain? Is is all of the above? Winters Bone this aint, let me tell you, and it joins that other terrible, overrated bildungsroman of 2013, Mud which also happens to star Tye Sheridan, who is probably the only person in the world whose career could be improved right now with a lead in a vampire movie. Joe has gleaned its applause primarily, from a good performance by Nicholas Cage, and the death of Gary Poulter, who is so obviously unwell during the film, it is sickening to watch, but David Gordon Green just isn’t up to the task of employing locals to “behave like locals” and the result is a weird, disjointed film that never convinces the viewer of anything and leaves them head scratching for a point to the whole thing.

Joe is one of those films where the symbolism is stronger than the film itself, dipping constantly into overwrought metaphor that acts like a bludgeon to the head. Stylistically it is sort of beautiful, intended to be a mismatch for the naturalistic horrors these people live with every day, but instead it just looks like the wrong idea has been plastered over the wrong story. Joe (Nicholas Cage) is a supposedly unpleasant man, who actually isn’t at all, and has a reputation for being hot-headed, because he beats assailants up when they try to rape women, or hit children. He’s a target for the local constabulary (we don’t know why – he just is) who are perpetually trying to taunt his darker side, and get him back in prison (we don’t know why – they just are). Joe runs a small work force of local African American’s (men who can’t get work any other way) who poison local trees for big business lumber yards, who in turn buy the land at a discount, move in when the trees are dead and plant pine, or some other more useful wood. He is a more than fair boss who picks his crew up, drives them to work, provides their meals, drives them home and pays them handsomely. What a bastard. No wonder the cops want him in jail.

Gary (Tye Sheridan) is a fifteen year old boy, who is “ready to become a man.” The film opens with his back to the camera admonishing his father Wade (Gary Poulter) for being a bad husband and father to his mother, sister and himself. Gary informs Wade that he deserves what is coming to him, and we soon see Wade walk to the top of a small ravine alone to cop a heavy beating from two men. Gary then takes a walk into the woods, where he happens upon Joe and his workers (just as Joe is rescuing a poisonous snake from being killed by his men – for gods sake) and decides he wants to work for him. Joe sees a strapping young lad, “ready to become a man” and offers him work. The next day Gary turns up with his father, but Wade can’t cut the mustard, and is fired. Joe witnesses a terrible act of violence between Wade and Gary, that makes him  – you guessed it – decide to take the young man under his wing.

The symbolism that belts you over the head is Joe as a type of “nature” (we get all this from the snake thing and a very pointless deer gutting scene) and Gary as a type of “hope” or “spirit of forgiveness” or even a Christ figure if you want to take it that far – which David Gorgon Green definitely does. Cage’s performance is wonderful, reminiscent of the good old days when his presence was a glorious thing to behold, but Gary is too-good-to-be-true, the kind of fifteen year old who will probably end up being Gandhi or Nelson Mandela. However Gary Poulter, the poor man, bless him, is a terrible miscast, made out to be something he is not by some sort of weird guilt we all feel because this man was plucked from his life and planted in a movie next to a big screen star, which one can’t help feeling should never have happened.  The camera opens on Wade, who only ever looks like a homeless man at the end of his miserable life. The film uses many plot devices to make out that Wade is a danger to all those around him, but even at the height of violent depravity, he never looks convincing as a man who can physically harm anyone, rather a man who could be blown away by a sneeze. It’s a terrible spectacle, and knowing nothing about Poulter before I entered, I spent a great deal of the film wondering why they were having such an obvious shot at homeless people? The truth of his sad tale makes the spirit of the role even worse, and the whole mess just comes across as a mistake from start to finish.

Add to this patchwork of a film the repeated insertions of horrible violence for no reason, including a deer carcass being sliced up, entrails spilling, for the camera and the aforementioned dog fight scene that had no plot purpose, and you get quite a silly film, that misses the mark in far more ways than it makes it.