Home » Film Reviews » The Kidnapping of Michel Houellebecq – Guillaume Nicloux and the joy of the human. (SFF Film Review)

The Kidnapping of Michel Houellebecq – Guillaume Nicloux and the joy of the human. (SFF Film Review)

Posted by lisathatcher on June 5, 2014 in Film Reviews | Leave a comment 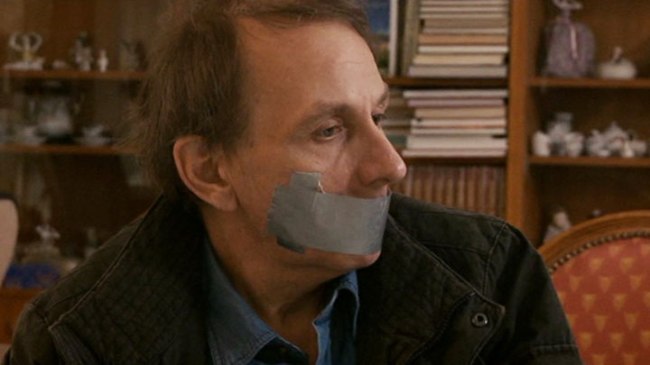 The Kidnapping of Michel Houellebecq is currently showing at the Sydney Film Festival.

The Kidnapping of Michel Houellebecq is an odd film, difficult to categorise, very funny and very dark as it paints a picture of a very bleak vision of democracy, where kidnapping a celebrity and holding them ransom is almost an acceptable form of employment. Apparently, the story goes, in 2011 Michel Houellebecq disappeared, failing to show for his book tour and several other key events. This is the fictionalised account of what happened in that time period, though it is made all the more interesting because Houellebecq plays himself, so it is fascinating to watch the great, controversial writer, as he interacts with a world that is, on paper anyway, hostile toward him. Except, this group of kidnappers are anything but hostile, and in fact only raise their voices and attack Michel when he withdraws into mind games swathed in an arrogance born of habit rather than self-congratulatory belief.

What is the most astonishing about Guillaume Nicloux’s film, is the easy acceptance of kidnapping as a legitimate way to be paid. In fact, Michel even gets a “cut” in the end for his trouble. Initially Houellebecq is blindfolded and placed in a box, but very soon into the film, he is sitting at dinner and chatting with his kidnappers. At one point, he laughingly suggests if this were a novel he would know he was going to die because they had shown him their faces, meaning they had no fear of his identifying them, and they reply with “we trust you, we know you would never give us up.” This trust is so strong, as it turns out, that they are able to forge the sort of relationship where eventually Michel is talking of coming back for visits, just to catch up. Houellebecq is always at a distance from his kidnappers, but this distance is one he keeps with the world, rather than a consequence of his circumstances. Eventually, the opposite is true – he forms an affection he never would if he wasn’t trapped in a room with these men for a long period of time. At the start of the film, Houellebecq is confronted by a woman who works for him, demanding to know if he need food or cleaning to be done and when Michel replies that he will ask if he needs it, she smiles warmly and says “Yes, but Michel, you never ask.” However, by the time he is languishing in his room which is a makeshift jail, he’s found his voice and is able to ask for anything he wants – even a youthful prostitute, which they supply him. Houellebecq seems genuinely surprised at his own power to ask and then receive, and at the same time deeply irritated by the restrictions they place on his “freedom” such as refusing him a cigarette lighter. The film becomes a strange comedy of errors as the mind games eventually mutate into warm conciliatory relationships where each finds themselves apologising to the other for any misunderstandings. 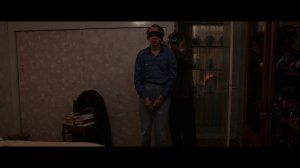 Yet, at the heart of all this congeniality and warmth, is the very real problem of the Kidnapping.  Houellebecq is genuinely puzzled by the idea that someone out there might pay for his release, although he appears, at time, to be quite flattered that he was “chosen.” It becomes a running question in his mind, yet strangely this is one piece of information his captors will not divulge, so he can’t find out who they would possibly target to gain a ransom for him. The casual approach is very work-a-day, yet even the kidnappers are surprised that Houellebecq is so relaxed and almost comfortable with the idea. he quotes Kant’s last phrase as his own defense, “It is good” as interpreted as a declaration of satisfaction. We get this feeling about Houellebecq, that he has lived his life and, while he doesn’t want to bring on an early death, he is satisfied with the years as they have been delivered. This and his closing remarks about democracy seem to be the fulcrum upon which the film is balanced, a jovial critique of the corporatism of rebellion.

In the end, it is a celebration of human interaction as an escape from nihilism, as the relationships deepen, flare into irritation and then topple over that fence into understanding and loyalty. Houellebecq becomes so enamored with the family he has encountered he promises to write them poetry and visit them with the completed product. They are so entranced by him they offer him a bottle of his favorite alcohol, despite their criticism throughout the film that he drinks far too much. In a kind of euphoric embrace of life, Houellebecq even starts to fantasise something “real” is going on between his fifty-five year old self and the twenty-two year old prostitute. But despite these acts of giddy embrace, one gets the sense at the end that Houellebecq has been as transformed by his kidnappers as they have been by his books and his celebrity, as he pauses to have a cigarette and ruminate on democracy with his captor on their way to dropping him home. (Not a spoiler – we know Michel Houellebecq survived this experience) He starts out a grumpy old man, redecorating his flat (no Scandinavian white!), dodging autograph hunters and deliberately hailing cabs then changing his mind when they park just to be annoying. The time spent with his captors reminds him life is precious and the struggle to connect a worthwhile cause. For Guillaume Nicloux, The Kidnapping of Michel Houellebecq brings him into a lighter, life affirming work, away from his darker earlier films.