Posted by lisathatcher on June 4, 2014 in Film Reviews | Leave a comment

The Swing Revival was a relatively short period, really hitting its stride around 1995, but kind of petering out by the time the new century blew in. I was dating a guy at the time who kept wanting me to go with him to ceroc dancing lessons, and I confess, I thought he was mad. But soon the whole Ska thing took off and I understood what he was on about – after the relationship had come to an end. I guess, like a long-term revival for Swing, it just wasn’t meant to be. However, those five to ten years (depending on how “into it” you were) were a passionate and emphatic return to the image and ideals of swing, and happen to coincide with Doug Liman’s first foray into film making. Swingers is a 1996  comedy written by then struggling actor John Favreau and besides being a first for Doug Liman, also happened to be a film filled with brand new names like Vince Vaughn, Ron Livingstone, Favreau himself, Brooke Langton, and the not terribly well-known actress Heather Graham. 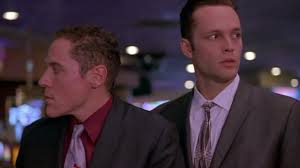 The story goes, Favreau wrote the screenplay in two weeks, based on him and his friends, a bunch of struggling actors in L.A. hanging around and trying to get work. In the film, Favreau plays Mike Peters, a struggling comedian who is pining for his girlfriend and can’t get over her. He left New York in order to further his career, but this move caused his girlfriend to break up with him, and subsequently leap into the arms of someone else, and Mike can’t get over her. This difficulty Mike has with moving on, and his friends attempts to help him get over his ex is the cause for most of the tension, dialogue and wit in the film, and it stands up well as a running gag; Swingers is a funny script brought to very “cool” life by the cast, but particularly by Vaughn whose performance was so celebrated, it was the film that had him be “discovered.” But beneath the surface and the witty one-liners as Mike’s group of friends try to cheer him up and get him moving on with his life, is a truly beautiful portrayal of young men, constantly trying to assert their machismo in the face of their overwhelming insecurity. Despite their foolishness, each of them is enormously likeable, and what Liman is able to draw out in their performances is a surface treatment of what each character longs to conceal. Eventually Mike will work out that he is scared of life and therefore doesn’t want to let go of his pain, but his friends all stumble their way through their lives, leaning heavily on their friendships for stability. Even their treatment of women is an act of performance for each other, and often they cling to women as mother figures when they are out of sight of their male friends. Liman exposes this behaviour as vulnerability, pulsing ever so close to their shaky surfaces and it works remarkably well.

To further enhance this dynamic, Liman cleverly has the group of men play out scenes from earlier films that exhibit heightened machismo – particularly Goodfellas and Reservoir Dogs. In one very funny scene, a riff-off the titular circular table scene lifted from Reservoir Dogs, as the young wannabee actors discussing the steadicam shot from Goodfellas, the walk through the kitchen. Rob (Ron Livingstone) makes a comment that the shot must have cost them a fortune, so later in the film, when Liman has them recreate the steadicam shot through the kitchen of a club they want to attend, he does it with a handheld, but still does a stellar effort repeating Scorsese’s cleverness. After the round table discussion, the group walk in slow-mo to their cars, in Reservoir Dogs configuration and segue into some very funny almost synchronised driving, all done to great contemporary swing by Average White Band. The positing of Scorsese’s machismo against these effete actors, Liman further enhances the trembling anxiety each of the young men so obviously exhibits. These witty scenes represent an ever present confidence in quality Liman has despite this being his first film.

Favreau and Liman together reject a beautified L.A. opting instead for scenes held in two-bit clubs, the camera following the group around almost in a raw documentary style. Many scenes take place in streets, car parks, or even in a crappy-end-of-town Las Vegas. Favreau has created a very quotable script, and terms like “Wingman” and “You’re so money” pepper the script with very funny, very repeatable lines.   It’s a walking and talking, dining and talking sort of film, yes another one, but if it wasn’t for the script and the sensitive direction Liman applies, alongside his great talent for narrative, the film would be a big nothing. The performances are all good, but to be fair they’re all in safe hands with Liman and Favreau and I’ve pretty much never like Vaughn in much ever since, and I really really like him here. His performance is so subtly nuanced, you  wonder why he’s not offered more character performances, but it does seem he’d be better with a director like Liman, who has a real talent for matching character and narrative arc. Swingers is Liman’s first film, and its a lo-fi indie with a twenty thousand dollar budget, and that’s the sort of money your parents can scrape up for you. It went on to make well over four million at the box office, and probably a lot more since then, as it has become an undisputed classic.

I only saw Swingers because I wanted to check out Liman’s films, but do yourself a favour and rent it as a Friday night funny. Don’t wait as long as I did to see it.