Posted by lisathatcher on April 7, 2014 in Film Reviews | 1 Comment

The Fountain is Aronofsky’s most challenging film to write about, and stands alone as a unique work in his oeuvre, until Noah that is, with which there are some strong similarities. All the hyperbole we’ve come to expect are there, the use of imagery to subvert narrative, the strongest points being the most subtle, images that challenge our notion of the intellect, the nature of genius and the relationship between, as Kant would present it, the noumenal world and the phenomenal world. The Fountain is a stark point of difference from Requiem for a Dream and thrusts that film against π as the sarcastically labeled wunderkind’s earlier works, despite the fact that The Wrestler will posit an even more radical departure from expectation that will form an uneasy trilogy of the first three films. The Fountain seemed to cause the critics to gleefully rub their hands in the face of Aronofsky’s finally going too far  – something we’ve all known was coming. Again, in this respect I compare him with Lars von Treir, in that critics and film analysts love to hate Aronofsky, particularly, because he does show disdain for critical analysis, something I felt was brought to the fore in Requiem for a Dream. Of course, that would never prevent me from trying to dissect his text as best I can (cheeky grin) – and one lives in hope that he will continue to poke fun at our efforts. However, unlike Lars von Trier (who I think is regularly misunderstood) my read of Aronofsky is that he fears analysis and its accompanying transparency, and therefore intentionally obfuscates, similarly to the way Spike Jonze does, although I can’t help feeling with Spike Jonze he’s not exactly sure what his films are about, whereas Aronofsky fears the banality of his pursuits. An anxiety we all share and deal with in our own ways, and really the definition of art is up to the analyst anyway, rather than the maker.

But to The Fountain.

What to make of this? It is first and foremost ambitious beyond its abilities and the connection with Hindu mysticism produces graphics that the Western culture doesn’t yet know how to appreciate, so all the floating Buddha style light effects are largely lost on a westernized gaze with pretensions to imagine we’re “above all that.” Despite all the oddness, I can’t shake the feeling Aronofsky is onto something here – a feeling that dogs me regularly. Where Terrence Malick appears childish through his attempts to avoid it, Aronofsky plays childish deliberately, and the effect is off-putting as it constantly pits our self aggrandized imagined enlightenment against itself. The film deals with the subjects of transcendence and enlightenment and combines them (in a similar narrative arc to π) with scientific research, although in the case of The Fountain, as opposed to π, the protagonist is successful, and therefore a truer genius. However, genius is measured by his ability to save his wife in material terms (phenomenal) and he is “only” able to save himself spiritually (noumenal). Again, the commentary is on our contemporary perceptions of genius as entirely phenomenological (or in the case of π as only perceived as phenomenological, which is another typical Aronofsky joke) whereas the real “cause” of Tom’s genius and his ability to reverse the disease and aging in his ape (early man) is the inspirational influence of his wife and her fictional book, The Fountain, which exerts so much influence, it almost implants the ideas that lead to the material scientific knowledge of Tom. It’s this examination that carries the seeds (pardon the pun) of truly interesting thought in The Fountain, bringing Kant’s dichotomy to brilliant (literally) life.

The great challenge in this presentation is how to offer this couple as each others genius. Izzy (Rachael Weiss) is Tom’s (Hugh Jackman) muse and vice verse Izzy’s greatness being affirmed by Tom’s medical superior, Doctor Lillian Guzetti (Ellen Burstyn). Mysticism is represented through special effects and Aronofsky uses a culturally abandoned religious sect – the Mayans – to establish legitimacy, something we will see him do in the future, but that is introduced for this film. If Requiem for a Dream irritated critics with its school-boy desire to impress, then The Fountain blows any desire to impress out the window. If The Fountain fails, it fails against its own standards, never courting the good opinion of its viewer’s because it is without a doubt his most obtuse film. Like all his films it has its surface “point” of workaholicism (another addiction) fear of death, transcendence, the role of spiritualism in our lives and the power of deep thinking over superficiality, but like his previous films, if you take The Fountain at face value, you will find you are bludgeoned with weighty significance and a preachy aesthetic. While I see the criticisms of folk who feel this, I doubt that Aronofsky could appeal to a deeper philosophical streak if he was simply that at every level. Power comes from his cheek, his jokes, his uncanny ability to stick it to contemporary culture where it hurts and his own vulnerabilities. Strangely, it is in Aronofsky’s transparency that his value is found. 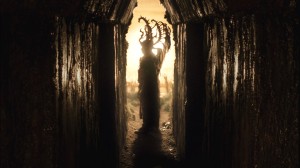 Aronofsky said of The Fountain that it was released at the wrong time (2006) a period when the Western World was first obsessed with Paris Hilton and social media, and had a party atmosphere to it. In 2009 he argued it would better be released any time later than that, when the world was willing to take things seriously again. This is possible, but it is more likely Aronofsky is his own enemy, if he is looking for outward appreciation, which I doubt he really is. If the critical and commercial flop of The Fountain genuinely surprised him, or if he had to come up with a line to satisfy interviewers who asked about its lack of success, is unclear in a director like Aronofsky. What is clear, is that Hugh Jackman, has never been better, and Aronofsky knows how to pull great performances from his cast, and has an integrity inside that somehow travels through all the sledgehammer showmanship.