Requiem for a Dream – Aronofsky refuses categorical analysis by offering everything. (Film review)

If  π was a little maddening, then Requiem for a Dream is a total mind F*&K when it comes to the overhanded frustrating emphasis Aronofsky will place on his not so subtle message. At its surface, the message of Requiem for a Dream is don’t do drugs, and there is absolutely no chance in the world you will miss this point, no matter how many times Aronofsky says that isn’t his primary message. However, against this rush of perpetual and overstated blackness is some real cleverness that not only rescues the film from its perpetual preach but includes enough brilliance in its performances and film making to make the film a genuinely sublime effort. It is a stroke of real cleverness to give everyone in society their “fix” as Harry Goldfarb (Jarod Leto looking even more gently beautiful than he does in Dallas Buyers Club) states, and this fix ranges from TV addiction, celebrity status, sugar and coffee right through to coke, heroine and speed. We’re all on something appears to be Aronofsky’s message, so you’d better start cutting down on the sugar, or there but for grace go you. As with  π there is an excellent score and a deeper development of that editing wit and the grab bag of cinematic tricks Aronofsky likes to produce, the split screen, the slow-and-fast motion and the famous rhythmically repeated inserts along with that great sound work. Requiem For a Dream has been pitted against those other great “drug” movies of the end of the nineties, start of the naughties, and the film has been repeatedly accused of being impossibly bleak too early on, thereby diluting its climax. However, a criticism like this assumes a level ignorance necessary in the viewer, that just as he did with  π, Aronofsky faithfully examines.

What separates Requiem For a Dream from other famous drug films made around the same time, such as Trainspotting, is the refusal of any pleasure principle. Aronofsky will include drug use in all his films, but they remain an examination of the mind-body anxieties of contemporary life: Max takes them for health reasons, Tommy in a search for knowledge, Randy “The Ram” takes them to enhance and develop his body and Nina uses drugs to unleash a personal darkness she needs to indulge in to achieve perfection. In Requiem for a Dream, the four protagonists move from controlled drug use to absolute self annihilating dependence. John Pistelli has a nice post here that I don’t agree with in all its points but makes an excellent observation about the use of image and the cross-section with cultural iconography, particularly emphasised by the Jewish Sarah Goldfarp’s emaciated post concentration camp Jewess trapped in the insane asylum revealed during the films shocking final montage. This idea of image over narrative, exposed through our relationship to our own bodies opens up Aronofsky’s films past the tropes he is accused of, particularly the heavy handed shock value technique. 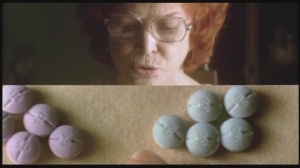 In some ways this satisfies the intellectual fascination with Aronofsky, and gives him a connection to Lars von Trier beyond them releasing controversial films at the same time at the time of this post. Aronofsky’s primary point isn’t the narrative arc, it’s the image used to relate feeling, and no where is this more strongly realised than in Requiem for a Dream. In many ways, the climax of Requiem for a Dream is the mid-point when Harry visits his mother, Sarah, and they have a quiet conversation where little is said, but Harry realises his mother has slipped beyond his grasp. This is the real point of Requiem for a Dream, and Aronofsky, contrary to his use of visual techniques prior and post this scene, simply allows the camera to rest on two people in the most intimate of all relationships (parent and child) coming to terms with their mutual alienation from each other. Ellen Burstyn’s Sarah relates her vision, with a vulnerable openess that Harry had never previously seen. Part way through he realises that in buying his mother the television (her fix he calls it) he has completely missed the mark. This scene is exemplified as crucial because it is not painted with the heavy-handed stylistic visuals, rather Aronosfksy simply allows a very brilliant performance to exist. Posit this against the other famous scene of displaced intimacy, that of Harry and Marion making love through the split screen of dissociation, and we get closer to Aronofsky’s primary point of dissociated loneliness, exemplified by the viewer in the cinema. If all his other protagonists have a reason for their drug use, the four of Requiem use drugs to avoid the alienation no project can rescue one from. Nothing will save Harry, Sarah, Marion and Tyrone from the overwhelming understanding that their dream will be equally futile as realised and even in the throes of success, they wont feel any different.

In many ways, the drug use is a side issue, taken on board to justify the use of intense imagery and film experimentation as Aronofsky loves to play with audience expectations. I referenced this in the  π review, but as Pistelli writes, when Sarah Goldfarp is the emaciated concentration camp Jew, Tyrone the re-enslaved black man, Marion the woman-as-whore, and pretty boy Harry mutilated, he wants to play with the audiences relationship to image over narrative. Aronofsky does not invite us to establish commentary on “why Sarah is represented as a post concentration camp Jew”, he wants us to notice the presence of the image outside of narrative. Just as the people who love  π are the people Aronofsky turns against (in good fun, I will add, and this is why he reminds me of von Trier) so he turns Requiem for a Dream against film interpretive analytic, deliberately going in so heavy handed that analysis occurs as absurd, primarily because every point is made almost all the time. The death of the American Dream, the perils of Drug use, alienation, addiction, the attack of modern society on the individual, poverty, exploitation, race, sex and ageist tropes, the passion for celebrity, the nature of realities transience, cinematic referencing, and on and on. even Clint Mansell’s evocative sound track is a collection of different strands of popular requiem’s. Its an orgiastic delight for the film analyst and in its offerings, equally turns against the practice of film criticism. If  π had a joke at the expense of the mythology of exclusive (white) male genius, then Requiem takes a swipe at the navel gazing cultural analyst – and probably film criticism itself, as the critic sits in the audience alone and isolated, thinking they are connecting with the world.