There has been much talk of Frankenstein lately. A new screen production, and the Ensemble theatre bringing its stage play version to life in 2013. Now, timed perfectly to offer an intelligent alternative to the latest film version, The Genesian Theatre has put together a Frankenstein based on the Victor Gialanella adaptation.

The curtains open and the quaint old Genesian Theatre is instantly transformed. Cave like walls at the back of the stage give an overbearing and ominous feel, and combined with the imperious internal beams and old world charm of the Genesian theater, the clever set, designed by director Debbie Smith, reaches out and includes the theatre as part of the performance space. With Michael Shell and Eden Sedev working together on the lighting, the backdrop can be the dark curvaceous world of a scientists lab, it can be the vast expanse of nature unforgiving to tortured soul wandering at night or it can be a wealthy young man’s palatial home as he prepares for marriage. Great doors swing back on heavy rollers to reveal an old-time scientific lab where a giant inverted light bulb reminds us not all ideas are good ideas. It is in this chamber Victor Frankenstein’s monster will come to life, and it is this inverted good idea that will ruin him. Adaptation has often been an issue for Mary Shelly’s novel; that so many give such differing views on the novel and the way it is determined can be a frustrating experience, however in Victor Gialanella we see a fresh approach that brings aspects of the novel to life not normally considered part of the Mary Shelly message, but are there, in the dialogue for all to see none the less. With the dire message Victor Frankenstein imposes on Captain Walton at the start of the novel, the interpretation that Frankenstein is a warning against the perils of science and playing god persist, however Shelly, a woman with a feminist mother and a utilitarian father, was forced to re-write the start of the novel for the more conservative Christian audience.  Gialanella’s adaptation removes this portion of the narrative, so that we see events as they occur in a linear structure, not as part of memory (which has the advantage of moral overtones). This, along with the dialogue between the monster and his creator, take on a fresh perspective, much of the lines coming almost directly from the Biblical book of Job. With Frankenstein awake (as opposed to the novel) and omnipotent witness as the monster commits his crimes, he is brought close to the actions of his creation, to the point of unification. In the changed novel the warning is ‘don’t play god’ but in this adaptation, Frankenstein is God and his hideous creature, so far removed from his initial Edanic ideal, all humans. God watches and judges, but the monster turns toward him, just as Job did on the mountain top, and demands answers from the creator.

“Do not betray me, oh creator, for we are bound by ties that cannot be undone.”

“Why did you do this to me? Why did you create a being that you turn away from in disgust?”

“I am responsible for everything he has done, for he is my creation.”

It is impossible not to see these words in light of another creator and his flawed, dangerous creature, that ended up turning on him and murdering his son.  In Gialanella’s hands,  Mary Shelly’s judgement turns away from science to the great inventor himself, and the creature becomes the complex animal, so often causing death and destruction regardless of intention that is human beings themselves. It breathes fresh life into the novel, makes for exciting, intelligent viewing and, it can be argued, returns Shelly’s novel to its original premise. All this theologising comes together nicely under the watchful eye of Debbie Smith, who has assembled a fine cast, able to live up to her vision, with the stand out being Vincent Andriano as The Creature. Andriano builds a slow wit that is convincing despite the enormous story ans small time frame. His voice booms through the theatre, adding to the experience of being inside the performance. Andriano pays great respect to the much misunderstood writer of the original novel, by making a deceptively human monster. In one particular scene, the slaughter of William, Andriano evokes the death scene from the film adaptation Of Mice and Men, the implication being his monster is a human who doesn’t know its own strength and performs acts of aggression even when it thinks it does the right thing. It’s a masterful performance in firm grasp of its own interpretation of its now very famous character.

Dimitri Armatas is Victor Frankenstein, which in this adaptation is almost like playing God on stage. He does a superb job, his proclamations that he is to blame for his creation stemming from a lamentation, not from a real accountability, which further enhances the nuances Debbie Smith and Victor Gialanella want to bring to the fore. His Frankenstein is knowledgeable, tossing his creation from his desired imagined Eden with disdain, never thinking the creature would survive, and not feeling the full weight of his action until it does, and yet it is through Armatas’ performance that we sense the deep bond between creator and creation, and we get a true sense of how the salvation of each is within the grasp of the other. 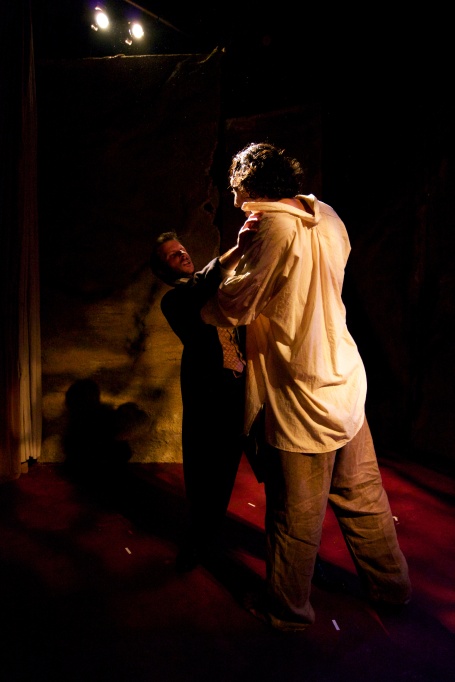 All the cast do a good job, with Cassady Maddox as a charming, intelligent and beautiful Elizabeth, Emily Pollard a slightly comical but gently reassuring Frau Mueller, Sophia Harrison bringing a strength to the desperately sad Justine that gives this character the necessary gravitas and Ava Strybosch and Indigo Devlin are very good as the two age versions of young William, neither daunted by the importance of the character they play nor the prospect of being on a stage. Michael Heming is a superb De Lacy, the only consciously good (as in unmotivated by their singular desire) character in the play, and the blind man – another key feature that ties Shelly’s novel to the bible, this time the New Testament.  Dereck Camereon is a warm Henry Clerval, and Symeon Thompson a commanding and slightly awkward Herr Mueller. Mark Nagle and Marley Ereuti are suitably creepy as Alphonse and Schmidt and a special shout out has to go to Susan Carveth as costume designer and Karin de Jesus as Makeup, both of whom set a tone that enhances both set and performances.

Debbie Smith has taken a lot of chances with the Genesian Theatres version of Frankenstein (not to mention bringing a live dog on stage) and every one of her gambles pay off, making this the very best Genesian Theatre production I’ve ever seen. Most of all, it is a performance that pays homage to the much misunderstood Mary Shelly herself and brings her own creation – muted and warped to prevent its making havoc with the world – to terrible, shocking and exciting life. Make this version of Frankenstein a must see on your theatre agenda, particularly because the dialogue between Frankenstein and his creation will whisper many dangerous and exciting ideas, and isn’t that what we go to the theatre for?