Posted by lisathatcher on February 6, 2014 in Film Reviews | 2 Comments

Alexander Payne’s second most successful film to date – his most up until Nebraska – is also arguably his funniest, if you like conversational wit over quirky charm, because its best competition is and always will be the titular Payne film (that incidentally is nothing like any other Payne film) Election. Now two films and five years away from Election, Payne will find it has become the bench mark, his signature film, critics and fans alike looking back wistfully at its brilliance and stamping its trade mark over every other Payne film. And yet Sideways is least like Election out of all the films made to date, and more emblematic of Payne tropes that didn’t exist in Election – the road trip and the strong connection to the land – even though the sexual man/boy character first raised through Matthew Broderick’s Jim McAllister comes to its towering crescendo in the form of Jack Cole, the Thomas Haden Church emotional infant content to remain a child while everyone else is looking after him. If the stripping of Kathy Bates in About Schmidt was a brave move, the openly naked revelation of two men going through male menopause is an even braver step, and part of what makes the writing team of Payne and Taylor so effective is their ability to portray unpleasant men with great sympathy, bringing a fresh perspective to the tired idea of the male mid-life crises exemplified in his red sports car.

Of particular importance, and a most undervalued beauty of Sideways, by reviewers at least,  is the connection to the wine growing country Santa Ynez Valley in Santa Barbra County, California where much of the film is made. Despite its themes of men aging poorly and abusing wine aged gracefully, Sideways did manage to turn the wine growing country into something of a tourist haven during the popularity of the film, and much of this hinges of Paul Giamatti’s stunning performance as the depressed Miles, and his and Maya’s (Virginia Madsen) overt wine-babble seductions. Several of his scenes connect him with the country, particularly moving is one where he abuses a bottle of wine running through vineyards, only to pause at the last drop and gently fondle a plump and beautiful cluster of Pinot grapes. Giamatti’s performance elevates cheezy to sublime, just as Nicholson was able to do under Payne’s direction in About Schmidt, though part of Sideways’ success is the sublimation of Payne’s moralising which will come back in full force in The Descendents, but we do not miss at all in Sideways; this moral to the tale penchant of Payne’s is also absent from Election, and speaks to what makes a Payne film successful. There is a touch of the prude in Payne and it’s best sublimated to a position of subtlety.

Once again it is Payne’s ability to direct a perfect cast that brings his and Taylors fine adaptation of the Rex Pickett novel to vibrant life. It’s a standout performance by each of them, but especially Paul Giamatti whose Miles embodies much of the physical engagement Payne insists upon, but reduced to the most subtle gestures, eye movements, eye brow raising, slight twists of the body and his fantastic voice quivers. A logical progression from Payne’s first lead, Laura Dern’s Ruth Stoops, through Witherspoon’s Tracy Flick and Nicholson’s Schmidt reaches its zenith in Sideways, the Dern character almost slapstick in the externalization of her characters peculiar ticks and expressions, slowly moving deeper within through the subsequent leads, till it is almost completely internalized through Giamatti. Ruth Stoops and Tracy Flick have obvious “walks” that separate them from the characters around them, as but by the time we get to Miles, that walk becomes the full embodiment of the dry emotional well into which he is pouring his soothing balm. In the montage at dinner, when Miles and Jack first dine with Maya and Stephanie, the oncoming depression of Miles is immaculately produced almost completely in Giamatti’s eye movements and shoulder sinking alone, and the reflected pain in his friend Jack’s eyes. It’s a moving scene, completed with a soft focus, and an elegance as knowing hands reach repeatedly for fine wine, only equalled when Phedon Papamichael’s camera gently caresses the beauty of the wine growing country itself. 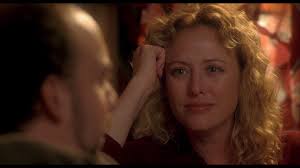 Sideways is the first film Payne makes without cinematographer James Glennon and the difference is stark and immediately recognisable as gone are the muted washed greys, and in their place an emotionally wrought concentration on face and place, wrapped up in a far more sentimental approach to the scene. It’s a film making relationship Payne will retain, as by the time we reach Sideways in his oeuvre, a fondness for working with the same team surfaces, particularly in the relationship with editor Kevin Tent who was nominated for an academy award for Sideways and whose work with Payne slowly brings editing to the fore of the emotional connection with Payne’s audience, particularly obvious in the aforementioned montage sequences and some split screen work that nicely posits each man’s face against the intelligent wine producing farms and fields. Together with a killer original sound track of fifteen jazz instrumentals composed and produced by Rolf Kent and arranged for the band by Tony Blondel that took up its own momentum, the combination of sophisticated middle age appreciation for the finer subtleties of life and middle age angst struck a chord with audiences in 2004, to the extent that the wine industry experienced a peak in sales for Miles’ favourite wine Pinot, and a drop in his least favourite Merlot, and even spawned a Japanese remake in 2008. 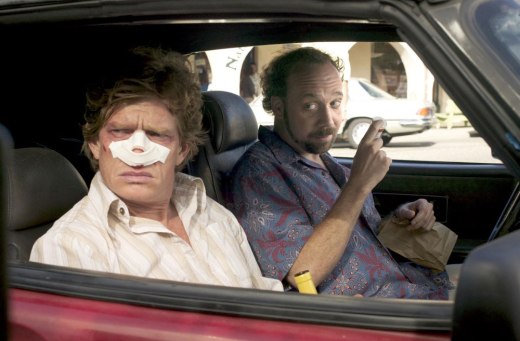 So much of Payne and Taylors character study comes from the small detail they include, such as Miles instant recognition that the latest edition of ‘Barely legal’ will serve his purpose better than the previous months edition, Jack’s chewing gum while wine tasting, Miles’ request for the ‘bottle that did it’, that converted Maya into a wine aficionado, and Maya’s immediate answer to the question she’s been waiting for and rarely asked. Virginia Madsen and Sandra Oh work very well with Payne, become the most successful of Payne’s women to give themselves almost full character arcs, but as side characters they still serve only to reflect the men back to themselves, and almost nothing is made of the fact that Sandra Oh’s Stephanie is willing to commit everything – including her child – to a man she’s known for a couple of days, and Madsen’s Maya produces mini outbursts of venom toward her previous husband, both of which are clear and present warning signs that are too much for the role their characters are meant to play and in the end have to be ignored by the viewer to make the film work. Sideways is the last film Payne will make with Taylor, as the original team of Payne, Taylor, Glennon and Tent finally falls away, leaving Payne stripped of many of the nuances that made his early films work so well.