Home » Film Reviews » Her – Spike Jonze and the all white on line universe. 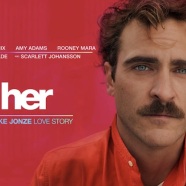 Her – Spike Jonze and the all white on line universe.

Posted by lisathatcher on January 13, 2014 in Film Reviews | 6 Comments

With its muted colours, its non fashion specific clothing, it’s ambiguous imaging of Los Angeles, and its floating camerwork, Spike Jonze has created a world that could be our past, our present or our future, particularly given how many white Anglo people he has walking around Shanghai, which is the real setting for Her. Underlying Her is a political promise that the future may not be given over to emerging economies and Western ‘civilisation’ may yet regain its stranglehold on the world; Jonezes L.A. has almost completely succeeded in ridding itself of non-whites, with one exception of an ‘Asian’ female who is a white-appropriate lawyer dating a white male. It’s an odd vision, a completely and totally white vision, where OS (operating systems) may not have a body, but they sure as hell have a race. However, Her can’t be said to have a permissive attitude to what it presents, but that is part of the problem at its heart. It’s having a bet both ways on an examination of… well… what? Our relationship to technology? Our complicated responses to love and sex? Our overwhelming loneliness and ennui? Our social narcissism exemplified in social media? The transformative nature of love and relationship? You are never sure what is being examined and you are never sure what Her is trying to say, and although the film succeeds in portraying each of these ideas, it never carries one to a logical or idealistic conclusion so that we are left at the end of Her staggering around the in fog we started out from. Rather than paint a picture, Spike Jonze avoids a conflict, wrapping us all up in muted hues, Scarlett Johanson’s erotic aural distractions and Arcade Fire’s romantic swell.

This weird ethnic cleanse is perfectly positioned along side the intense narcissism of the central character, and in all the (white) people he sees his reflection in around him and the overwhelming supremacy of what Freud would call the death drive, realised in the case of Her through the non-instinctual connection people make with the Other that refuse sexual connection. Is the world of Her real or a figment of Theodore Twombly (Joaquin Phoenix) imagination? Every character, except his ex-wife (Rooney Mara), is a reflection of his desire, his ‘realisations’ and his cultural insistence. The online world that we carefully tailor to our own image has been externalized for Theodore, that is until it challenges him and then it is removed from his sight with a deep sigh and a lament for how the world ‘really’ is. However, when it comes to the great risk of connection with an other, Theodore removes himself as much as possible, instilling the sort of self obsessed control that can even bore an OS into moving on.

Theodore Twombly is a writer at BeautifulHandwrittenLetters.com, a weird place where the old stereotype of the executives secretary is sending roses to the wife, a service that can only work if the receiver is so maniacally egotistical it would never occur to them that someone they do not know has sent the letter – or maybe they don’t care that the sender didn’t come up with the sentiment. True to the barriers this ‘service’ places between people, there is a point in Theodore’s journey when he is so lonely its killing him, that cries out to the screen on behalf of a young man “Dear Grandma, why do you hate me?” and then has to remove the wording and go back to forging the hallmark-note he was paid to write. The job is a lovely metaphor for the distance we create between ourselves under the pretence of reaching out. It’s these metaphors that are the gift of Her, and definitely where Jonze excels, making the first half of Her a sublime experience that poignantly reveals a version of us to ourselves.

Theodore is putting off signing divorce papers, because even someone as narcissistic as Theodore can see some faint sort of reason for having had that relationship, though his obsessive reflecting never morphs into self-analysis or even self-awareness. Typical of his character, he is brooding and avoiding, rather than takeing action, resorting to an on-line world in the form of fluctuations between porn (white women) and video games in order to pass the time. He is petulant and sulky, his only human contact being his best friend from his youth, Amy (Amy Adams) who is having her own marital difficulties, and his co-workers, with whom he tries to constantly avoid meaningful contact. When he decides to install a new OS (Scarlett Johanson) that is so technologically advanced it perpetually evolves, he forms a relationship with it, to the point of falling in love. As their relationship developes, the cracks in Theodore’s self-awareness (or lack thereof) show through; for example, he is turned off Samantha when she starts to act human only to be attracted to her again when she evolves beyond human-ness, he fails to engage with a surrogate body supplied by Samantha without realising his job is to be the same kind of surrogate, etc.

Frustrating is the appearance of ideas, dotted throughout Her, that sit stagnant and undeveloped. For example the spectre of the mother regularly appears: the porn Theo watches is of a pregnant woman, the set up mode on his OS only needs to know how he feels about his mother in order to create his perfect on-line interactive mate, he plays a video game with Amy called ‘perfect mother’ that is like a Sims version of mothering, there is the idea of the motherboard, etc. However these (and many other) ideas are just plonked in the film. They excite the intellect, and then leave it dangling, almost as if Jonze himself doesn’t quite know what he wants to say, or rather that he doesn’t have anything to say but wants the appearance of having said something profound.

Because the issues raised by Jonze are never fully realised in any particular direction, we are left at the end of the film not being entirely sure if Theo has learnt from his experience or if he is just going to try to find another non-physical relationship. Fortunately, Jonze splices the film with more beautiful visual metaphors such as real trees and real snow reflected against the fake tree image at the back of Theodore’s elevator, the intricate beauty of dust particles dancing in the sun and their place in the tangible world, the possibility of an entire universe in a sort of virtual existence that Samantha has been able to access. It is these ideas, these beautiful images that keep us believing Jonze is saying something when the real narrative dried up half way through, Jonezes images constantly saying “there is something to say here” that turns out to be a obsfucation rather than a genuine artistic statement.  Probably the only statement that is fully and properly realized is the obliteration of the Other through race, Theo having absolutely no contact with anyone from an alternate ethnic group that may force a confrontation with his ideas of an all white on line universe. However, for all its problems, Her is a beautiful piece of arresting cinema that may tease at the edges of your intellect even if it never fully and properly engages it.