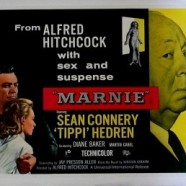 Posted by lisathatcher on January 3, 2014 in Film Reviews | Leave a comment

Not just poorly criticised in its time, but reviled and even hated, Marnie, situated just after Hitchcock’s Psycho and The Birds is something of a sleeper masterwork by the brilliant director that may still be revealing it’s multilayered brilliance fifty years on.  In fact Marnie is so intelligent, so complex, so laced with conflicting points of view and opposing symbols and signposts that still one teeters on the edge of conviction over Hitchcock’s deliberate insertion of all this psychodrama or if he imbues his film with a multitextual readability such that a viewer can project multiple perspectives onto the film – a film so dense it could never be a blank canvass, and yet so open it seems to represent all ideas. Everything is in Marnie, from psychology 101 through to the most complex symbolism of the psyche ever conceived by Freud; from the perfect casting of Sean Connery (the ultimate man’s man as he was only famous for playing James Bond at the time) against the impossibly dominating ownership Hitchcock projected onto Tippi Hedren when she couldn’t be Grace Kelly; from the sexual clichés of hunting and horse riding through to the post-cubist shaping of colour and couture that builds the perfect woman, Marnie’s place in cinematic history is taking decades to examine and bring to the fore, surely the perfect sign post of a director many years ahead of his time. 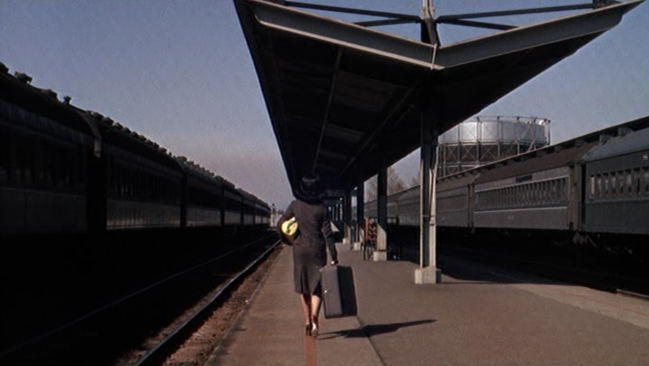 At its surface, Marnie  is the story of a kleptomaniac woman (Tippi Hedren) who happens to steal money to support her invalid mother. The women have a purity complex that speaks to something in their mutually haunted past, but despite their closeness, there is a haunted suspicion that runs between Marnie and her mother (Louise Latham) that manifests in the mothers control over her daughter even as she pushes her away from an affection Marnie clearly craves. Marnie changes her appearance, gets jobs using her good looks and her secretarial talents, and steals from her employers. This routine finds her at the Rutland publishing house, where she begins her deceitful dance combination of winning her colleagues trust while planning her next robbery. Unbeknownst to her, CEO and owner, Mark Rutland (Sean Connery) recognises her from a previous robbery and decides to watch her carefully, falling almost instantly in love with the combination of her beauty and obvious vulnerability, which he recognises as dwelling at the motivational heart of her thievery. When he confronts Marnie, after she has stolen from his own office, he blackmails her into marrying him, a marriage he thinks will save her emotionally. However, upon marrying Marnie, he discovers she is frigid also, and coolly refuses him, except for one brilliantly filmed moment when she icily accepts his body over her own, the implication being even in penetration, he can’t touch her. (Made all the more chilling when posited against the great James Bond who dominates and controls every woman with ony a kiss or even a glance) Soon Rutland discovers he must take Marnie back to her mother, force the women to confront over their past, the intention being to release Marnie from her psychological cage, and (hopefully) help her realise she really does love him, and only him. 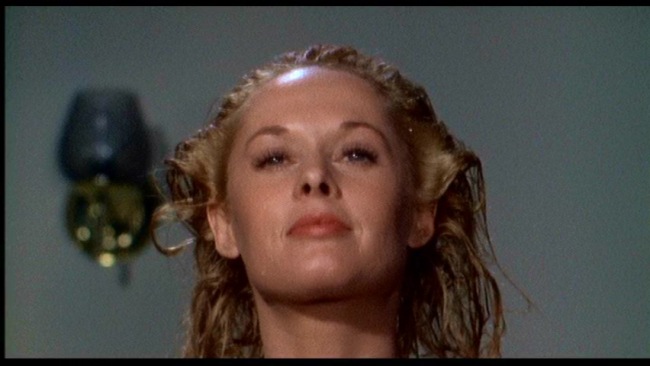 As if that plotting isn’t convoluted and interesting enough, Hitchcock laces Marnie with multiple competing narratives that come through all the different ingredients of film making. Visually, the story of Marnie is a departure from the suspense of his previous two films (Psycho and The Birds), however it is a perfect continuation of his haunted recognition of the dominating nature of female sexuality, a spectre that hangs equally over females as well as males, and the question of the madonna/whore relationship revealed in the previous two films.  In many ways, Marnie is the perfect complement to the preceding films, totalled in the opening shot of a woman, seen only from behind as she walks away from the camera, the yellow purse she carries taking up the screen until she walks herself into view and then the long lines of the railway station that will facilitate her complete disappearance. The female handbag, carrying the money she stole from a man she tricked with her beauty is the perfect symbol of the prostitutes vagina, filled with money and deceit, leaving even the most willing customer with the feeling he’s been duped or robbed;  Hitchcock’s women (and therefore all women) are not prostitutes – but they must live under the symbol just the same.  Hitchcock is too brilliant a director to force this commentary on an audience through dialogue,  so it sits in the spectacle of his sublime images, rescuing the individual in favour of a striking universal that is at the heart of his point anyway. As if this depth isn’t enough to feast on, Hitchcock looks forward to a second wave 1970’s feminism as the film plays out, Marnie competing against this spectre of female representation through her shocking intelligence (that easily outstrips everyone around her) and her private locating of her difficulties within male sexuality, something she icily refuses to the point of rejecting rape, as if the penis could ever be used as a weapon against her. 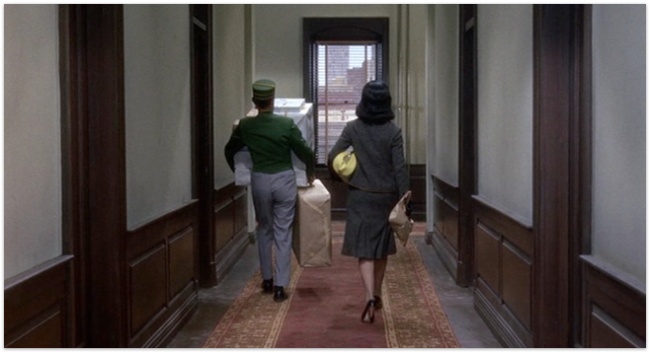 Hitchcock loves hotel for their illicit nature and the spectre of the protitute. It’s her place of business. 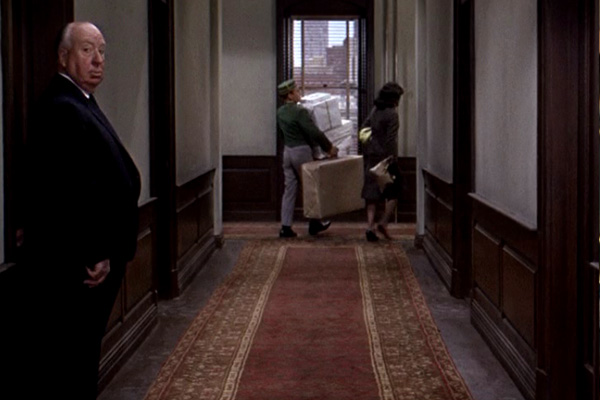 So it is here that he insterts himself.

Sean Connery’s Mark Rutland is another example of tremendous progressive thinking, and a remarkable feat of perfect casting, pitting an erotic symbol from outside the film against a character that becomes something ten times it’s size when seen from its outside perspective. Connery is far better than he is given credit for in Marnie, Hitchcock bringing out the talent it will take the world several decades to begin to recognise. Hitchcock has Connery play Rutland as if he were a type of James Bond, but instead of winning every battle, this Bond is constantly struggling to maintain his control via his facade as the great lover. For most of Marnie, Rutland is acting off the cuff, his love object constantly tossing him emotional curve balls that prevent him from being able to get a grasp of his situation. The result is a man constantly projecting control, when he is always treading water. Rutland’s psychobable that accidentally works is taken from his passion as an amateur zoologist, but it is always clear he is out of his depth when trying to deal with Marnie. There is never any doubt his desire to help comes from a need to possess and that what really fascinates him about Marnie is how little she needs him. Imagine James Bond being forced to deal with a woman he really wants, can’t understand, who double speaks him out of everything he thinks he controls and then imagine that James Bond dealing with all of this publicly, and you have this great Connery performance, restrained, confused and perpetually struggling fo the power Marnie so easily wields. 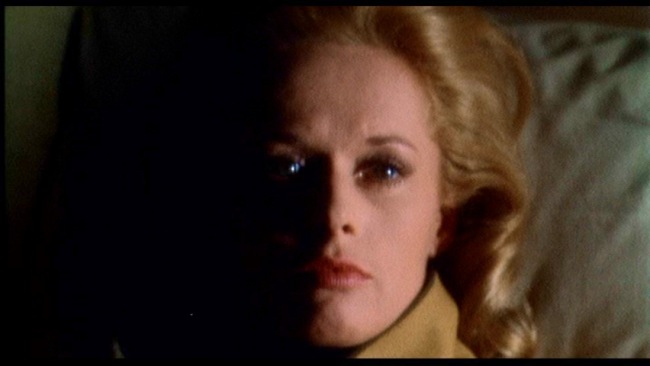 Marnie’s cold defiance as her husband moves over her.

Much of the criticism of Marnie when it first came out was of the cheezy backdrops ands settings, most notably when Marnie is horse riding, but like the obviously-not-so-obvious transition breaks meant to give the impression of a single take while also drawing attention to the break in the film used in Rope, Hitchcock uses these false backdrops to say far more than a simple immersion of Marnie into reality. Marnie’s riding and relationship with her horse Forio is her connection with her own fantasy world, the only time she looks free, the horse being the ultimate symbol of female sexuality, freedom and a passionate stage almost all little girls go through. The false backdrops indicate a false world, they are hardly the error of a film maker who produced The Birds only a year before. But again, as with all elements of Marnie, Hitchcock is not content with the obvious. Animals are another thematic link with Psycho and The Birds, the former having taxidermy at its horror symbolic core, and the latter having female sexuality and repression at the heart of its irrational animal behaviour. In Marnie, we finally have what Hitchcock meant all alone, the woman is the animal. Rutland is a zoologist, not a psychoanalyst (as is used in other films like Spellbound) and his first attraction to Marnie is similar to that of a jaguarandi, an animal he almost tamed. Note this, one of his early conversations with Marnie as she looks at the photograph of the snarling feline:

Mark: I trained her myself.

Marnie: What did you train her to do?

Mark: To trust me.

Marnie: Is that all?

Mark: It’s a great deal for a jaguarandi. 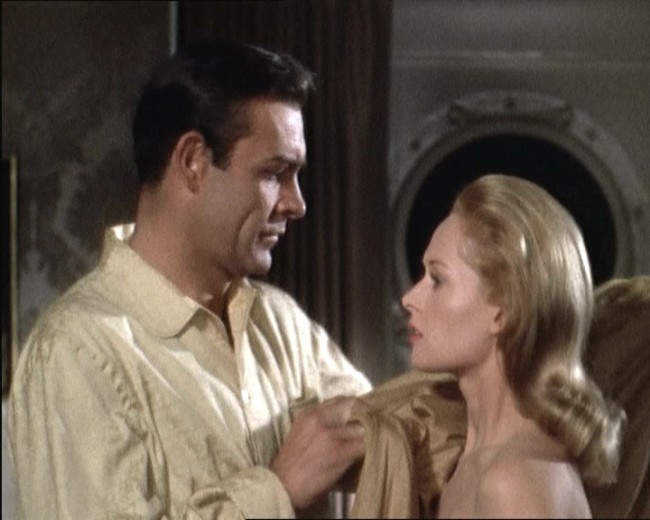 Over the course of the evolution of the relationship between Marnie and Mark is the gradual transformation of Marnie from wild jungle cat, to a horse, an animal that can be trained to perform, but retains its dignity and pride. The horse references when dealing with Marnie never end, even to the point of Mark becoming agitated when she won’t act like a horse.

Mark: I don’t, but they trust me, which brings us directly to our relationship, Miss Edgar.

Marnie: You don’t love me! I’m something you’ve caught! You think I’m some kind of animal you’ve trapped!

Mark: Yes, and I’ve caught something really wild this time, haven’t I? I’ve tracked you and caught you and by God, I’m going to keep you!

Of course all of this is summed up in the shooting of the horse, again taking power away from Mark Rutland and placing it firmly in the hands of Marnie herself.

The above scratches at the surface of Marnie, a film throbbing with incredible shots, progressive use of colour, and acting skill to say far more than the summarized plot implies. I’ve said nothing here of the camera work, including one of those brilliant long shots that results in a climactic moment made famous in Notorious. It’s assumed directors always know what they’re doing, and have a firm hold over their material, but when the detail is this intricate, when so many ideas are so beautifully played out together, competing and yet working in perfect harmony, its difficult to understand that one person can posses this much intelligence. And yet, there you have it – it’s the reason he’s credited with being the great Alfred Hitchcock. 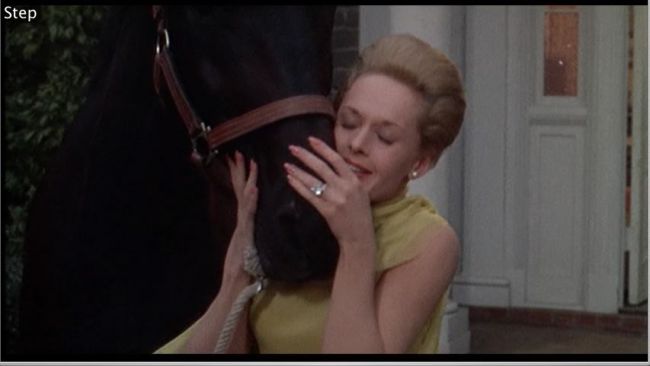