You Ain’t Seen Nothin’ Yet – Alain Resnais and the refusal to limit reality. (Film review)

Posted by lisathatcher on January 1, 2014 in Film Reviews | 1 Comment

The title You Ain’t Seen Nothin’ Yet is a lusty incitement from a ninety-one year old director at its surface, possibly designed to hush the eulogic rumblings from reviewers and film commentators over his last film Les herbes folles (2009) but when the director is not only one of the greatest living,  but one of the greatest ever, it carries the hopeful weight of, if not a blessing, then at least a promise we won’t be left bereft after his passing. Like his great film Last year at Marienbad, the title evokes the primary messages of the film, You Ain’t Seen Nothin’ Yet being a line from The Jazz Singer at the important transitional birth of talkies, as well as conjuring up the themes of fearlessness in performance, the invisible and the playful movement of time through tense. 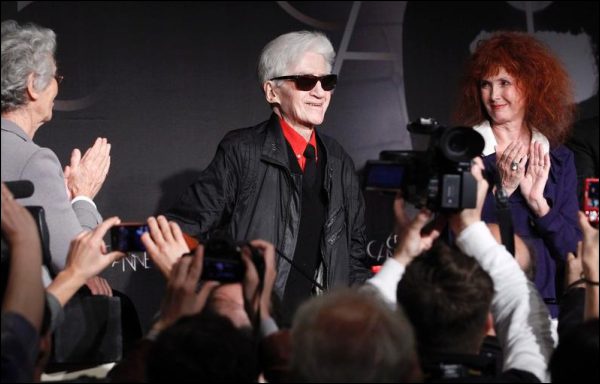 The film opens with the silhouette of cinematic greats from Resnais past being invited to the reading of the last will of a fictitious director friend,  Antoine d’Anthac (Denis Podalydès). Upon arrival at the remarkable château that is actually a shell for a screening room, they are each informed by Antoine’s faithful butler (Andrzej Seweryn) that Antoine’s concluding request was for them to watch a videotaped preview of his most recent production of Jean Anouilh’s Eurydice, originally written in 1941, a play famous for its modern retelling of the classic Orpheus myth. The group move to a strange HDTV screening room, their common bond being each played a part in earlier productions of the same play, the assumption being they might be the best judges of the quality of a current performance. As the film of the play progresses, the seated cast take over the much younger cast and perform the play inside the room. A morphing of memory, magic realism and passionate performance draw the play off the screen and into the reality of the previous thespians who, though much older, perform with the same dramatic realism, evoking the spirit and charisma of youth. 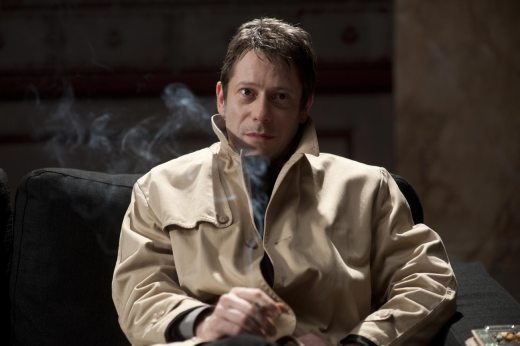 The spirit of senescence moves throughout the film in multiple ways, including the use of Eurydice itself. The earlier parts of You Ain’t seen Nothin’ Yet are taken from a later play by Anouilh, Dear Antoine, or The Love That Failed written by Anouilh when he was fifty-nine, and here they serve as an introduction for the play he wrote at age thirty-one, including this reflexive examination into Resnais own metatextual meditation on transformation, maturity and age. Dear Antoine, or The Love That Failed is a play that signaled a change in direction for Anouilh, so Resnais uses it to reintroduce the old, that has been transformed by the modernisation of the fictional Antoine’s production values. The set is minimal, in a large factory warehouse, littered with empty metal drums and tied to time by a giant pendulum that swings metronomically behind, between and in front of the young actors. Further underlying the theme of torch passing between older and younger, Resnais hands over the direction of the screen version of Eurydice to Bruno Podalydès who even picked the cast. Podalydès Eurydice is completely different to that of Resnais or Anouilh, given the aforementioned set, and the inclusion of mimed props and the pendulum. Podalydès modern-day version however, fades into the background as Resnais’ history moves front and centre via the actors of movies past coming into the foreground. 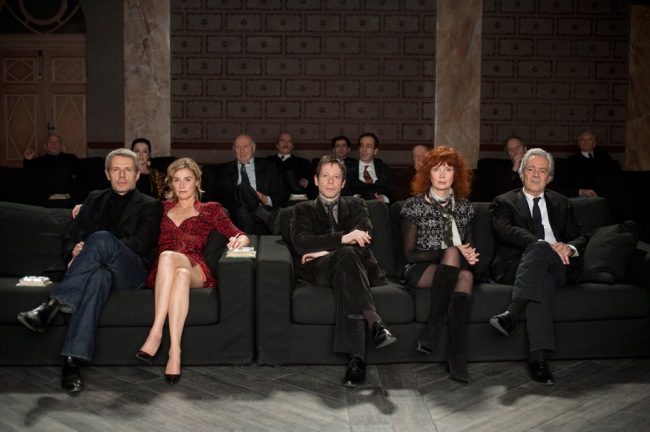 However, nothing in a Resnais film is what it seems, and true to the meta-narrative, as the old morphs into the new context something entirely new emerges. This is more than a medium transference, the HD video on the wall against the stoically pervasive celluloid of Resnais castle bound world. As the characters come to life, inhabiting their roles of old with the hard-earned skills of today, the castle around them transforms via a kind of magic realism, first by extending its borders, and eventually by opening out onto train platforms, bedrooms and even gardens. Resnais couples this with split screens and spot-lit facial focus used intentionally to blot out surrounds. Memory becomes facility as if it were a constructive tool in the building of meta fiction. The viewer lives inside the experience of a mirror on a mirror on a mirror. 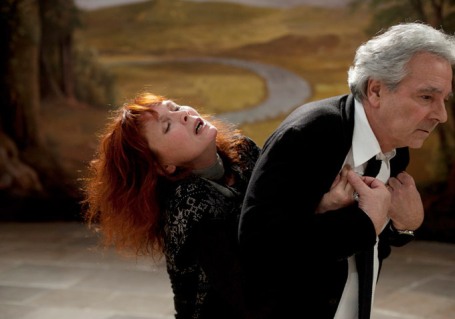 Still, despite all this time bending and cerebral twisting the physical presence of the actors never lose their dominion over the scene and that includes the physical actuality of their age, something never masked for the sake of their roles, that reverberates the circular theme of death in the film from the deaths of Eurydice and Orpheus in ancient Greek mythology to the much talked about death of cinema itself; Resnais cheeky longevity and his imposition of the relationship each of his actors has with their former selves. Many different conversations take place in this haunted world and true to the Resnais aesthetic, their constant is our relationship with the real. I’ll end this review of this incredible film with a Resnais quote I pilfered from Richard Brody’s great review of You Ain’t Seen Nothin’ Yet in The New Yorker:

The world is real for all, different for each, is more or less what Proust said. That’s what makes communication between beings difficult. At every moment, the imagination puts them on a different wavelength… .

We refuse to limit reality to the purely objective account of a scientifically analyzable world. We think that reality is vaster, which makes communication all the more difficult. One can imagine a world where everything would happen at the same time, a mentality of bees in a certain way, which would make for a perpetual communication of all brains.