The Hobbit: The Desolation of Smaug – Peter Jackson steps into the light. (Film review)

Posted by lisathatcher on December 22, 2013 in Film Reviews | 3 Comments

I have a perverse loyalty issue with TLOTR / Hobbit franchise, and that is I’m a sucker for these ground-breaking, mythologized pictures that are so huge and big and enormous and massive that you can’t remember who you are or where you are or why you are, nothing in your mind making sense because of that bullshit voice taking over and telling you, its time to ‘become who you were born to be’. Maybe this is because I was taken to see the first Star Wars films at an impressionable age, maybe it’s because I was raised in an obsessively obedient Christian household that did daily bible readings as a family,  but I find all rationality swept away in a torrent of nonsensical loyalty that whips through me at high frame rate, pushing me out the other side of the film panting from a religious like ecstasy. I have nothing to hang criticism on – As a little girl I read ‘The Hobbit’ so long ago I can’t remember what happens and I was oddly bored by ‘The Lord of The Rings’ as a sequel, giving it several attempts but never being able to immerse in its convoluted male dominated middle earth (gee I wonder why?) – so I can’t even claim to have a problem with the departure from source material. The problem with The Hobbit franchise is primarily that is gets compared to two other great works of art; the books and the previous three films.

Not that there’s anything wrong with that, because no one, least of all Peter Jackson, can claim The Desolation of Smaug should be a stand alone film, neither does it ever pretend to be stand alone, having that narrative peculiarity where it begins where the first left off, and ends where the next will start, a non book-ended plot that pelts at you from out of no where and disappears with the same fervor. I’m not one of those (many) who felt that An Unexpected Journey was overlong and plodding – I enjoyed the chance to sit back, breathe and get close to Bilbo (Martin Freeman – who is exceptionally good), particularly because of how much I loved the book which came flooding over me like a welcome old friend, and because, of the entire franchise, An Unexpected Journey is the closest to any of the books. However, the films are entwined and if Unexpected Journey set us up for something by bringing us close to Bilbo and the complicated relationship he has with Thorin Oakenshield (a deliciously brooding Richard Armitage) The Desolation of Smaug leaves us so frantically hanging, that I regularly found myself ignoring the primary action in favour of searching for Bilbo in the background. It’s not until we get to Smaug (of course) that the tension is revived, but much of Smaug’s genius is lost because we’ve all but forgotten about the emotional battle between Bilbo and Thorin.

How is it possible that we can forget this key relationship? Because far too many red herrings are introduced, the oddest of which centres around the reintroduction of Legolas (Orlando Bloom) and the bizarre love triangle between him, a new she-elf named Tauriel (Evangeline Lily) and of all people, Kili the dwarf. We could have predicted this in the first film, because Kili (Aidan Turner) was always too good-looking, but I doubt anyone assumed Fran Walsh, Filippa Boyens, Peter Jackson and (amazingly) Guillermo del Toro would be so  – lets face it – stupid as to introduce women into Tolkien’s middle earth sausage fest and reduce them to love interests. They sort of did it in Unexpected journey by creating sexual tension between Galadriel and Galdalf (WTF?) but this time it’s just wrong, as Tauriel is all bad-ass and gorgeous and then just caves into obscurity when a dwarf who has nothing other than looks to commend him, gets sick. Add to that the two inappropriately under developed characters of Bard the Bowman (Luke Evans) and the almost unrecognisable Beorn (Mikael Persbrandt) who are plopped in so randomly that by the time we work out how they fit in, their role is over, and we are left wondering where Bilbo is and how he is getting on.

Where An Unexpected Journey adhered slavishly to the book, The Desolation of Smaug wanders like a weed away from the designated path getting weaker at its farthest points, stronger when it reels itself back on track. It is so action packed (again opposite to the first film) that plot points and narrative structure are sacrificed for the sake of an adrenalin-wired hysteria that is at its absolute worst when the CGI imposes itself for no other purpose than (it seems) real actors move too slowly. A fabulous barrel battle is burdened by  the shadow of that Legolas agility that takes on a cartoonish quality;  we first saw it when he took down that oliphant in Return of the King, inspired by great moments like his swing to the saddle on the horse Gimley rode in The Two Towers, or the shield-stair-surf at Helms Deep. That’s the thing with Legolas, you can’t push it; leave us wanting more, and he becomes one of the greatest battle heroes, but if the balance topples away from Bloom and toward CGI you ruin him. Jackson teeters on that precipice here, ultimately letting us down, which is part of the curse of expectation. 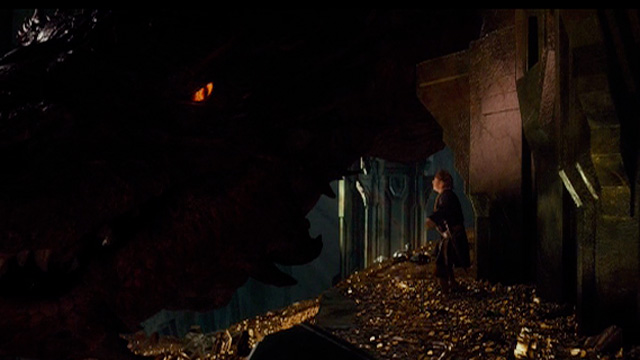 The Jackson and Walsh team did such a great job with the combination of  those helicopter shots (lol – how many do you reckon there are?) that swoop in and introduce properly developed, interestingly set up characters like Theodin King of Rohan and Denethor steward of Gondor, so that they swell the narrative, and inject the action with grandeur, mythology and history, but here we have no such connection to key characters, and so its hard to tell if we should be latching on to characters like Thranduil (Lee Pace) king of Mirkwood, father of Legolas and the nameless Master of Laketown (Stephen Fry) who seem they could go either way – good, bad or disappear into nothing.

But I’ve already blabbed on too long, and I haven’t even mentioned the dragon, Smaug (Benedict Cumbberbatch) which saves, not just the film, but the franchise being the same brilliant motion capture style creature Gollum was.  If Legolas looked CGI dependant at a few crucial junctures, Smaug absolutely never does, and his brilliance is perfectly timed to remind us what we love so much about Peter Jackson’s obsessive passion for these stories. As I alluded to above, my only problem with Smaug is that the Bilbo /Thorin conflict has been so watered down by the time we reach him, that his clever lines and his mind-fucking with Bilbo are lost in an ocean of “Why doesn’t the dragon just eat him?” confusion. To be honest, this will be solved by the inevitable repeat viewings that these films inspire, but it’s a shame the brilliant imagery is left to carry the bulk of the Smaug moments. Oh – the resulting battle with the dwarfs is a little underfulfiled also, because there are times when Smaug looks just plain stupid in his ability to be confused, and that robs the dragon of his power, But only a little, because there is no doubt that Smaug is the absolute best dragon ever shown on film and worth seeing on a large screen no matter how deep-set your hobbit-fatigue. 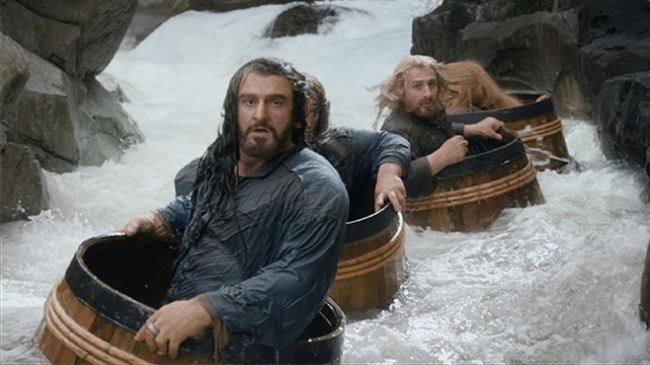 If you don’t care about any of this, and have that same problem I do of slavishly worshipping these sorts of grand cinematic empty gestures, then you will love the film anyway, but even if you are hesitant, go and see the film for Smaug.