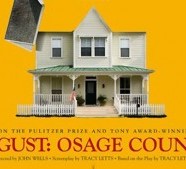 Posted by lisathatcher on December 22, 2013 in Film Reviews | Leave a comment

Lett’s opening lines in August: Osage County, voiced by patriarch Beverly (Sam Shepard – of course) from T.S. Elliot ‘Wasteland’ (because he didn’t write anything else), come with the disclaimer that Elliot wasn’t the first to say them, nor the last, but because he wrote them down formally (copyrighted them) we have to pay him homage for all eternity, setting the satirical tone for the malevolent homage to that endless theatrical obsession with peeking through the keyholes Americans have with their own multigenerational mental illnesses. Almost everything from American theatrical history is in this film (adapted by Letts from his own Pulitzer and multiple Tony award winning play of the same name) the drug addled ramblings of Violet Weston (Meryl Streep) reflect the morphine influenced blurts of Mary Tyrone in Long Day’s Journey into the Night, (Eugene O’Neils play) the intergenerational feline savagery reflect Tennessee Williams’ Cat on a Hot Tin Roof and The Glass Menagerie, the whole dropping of family secrets is Arthur Miller’s All My Son’s laced with the chronic dissatisfaction of Death of a Salesman, and it goes on. Beverly’s faded literature professor is as strained a metaphor as the awkward silent observation of Johnna, a Cheyenne woman hired to be a nurse maid by Beverly to watch over his impossibly sick (and revolting) wife Violet as she slowly dies of cancer of the mouth(!)  Mmmmm… I wonder what THAT all means? 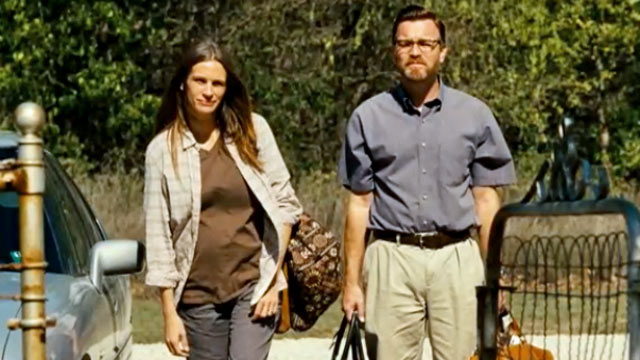 It’s the overt symbolism, and barely-beneath-the-surface subtext of August:Osage County that inflict a fatal wound, the sarcastic Rosanne Barr (those 80’s and 90’s Family TV shows have printed their stamp too, such as Roseanne and Married with Children) inspired negative wit notwithstanding. It’s a counter-attack against that endless approval of that pulled-up-from the bootstraps generation of the immediate post-war babies that get perpetually applauded as somehow superior by neocons the world over, particularly in this instance, the Bush administration.  Think of it as Tracy Letts’ response (Lett’s generationally straddles the end of boomers and the start of Gen X) to George Bush junior’s presidency as a subtext homage to his own father (Why get Saddam? He tried to kill my dad). Lett’s is obviously sickened by that passion for the burying of truths and secrets that Bush so admired, but the problem with August: Osage County is exactly what it claims – there is nothing new to say, and that is primarily because the anger is reactionary not born of creative impulse. A more interesting examination of this anger he harbours (so emblematic of today’s pre-middle aged) would surely be to focus on the generation itself, not mirror it as nothing but a reaction to its previous generations – something it has been accused of many times before.

That is not to say Letts’ doesn’t wrap this problem in beautiful language, and to be fair to his talent, I am highlighting something he declares from the get go. It’s just that the native American sitting lotus style alone in her attic, observing the dysfunction below her, only descending from on high at moments of extreme danger, such as to wallop a rapist over the head before he acts, or extend a hand of gentle kindness, is … well gross, and conversely emblematic, not of what it intends, but the whole problem of that blind introspection that all the plays and television shows in the world can’t seem to help American’s get a grip on. Even when they strip everything away and attempt to show themselves at their worst, they are filled with a self-congratulatory adoration. The American dream is equally upheld by its critical shadow as it is by the sunny hope-filled belief that underlies the delusion, and its high time American’s got their head around this. Letts inserts drugs, attempted rape of a minor, foul language, grotesque caricature, infidelity, madness, substance abuse, suicide and incest and the film still throbs with his frustrated anger as he unsuccessfully tries to tarnish something that is held in place by the indigenous soul, as invisible as god, that he can’t seem to see he created. 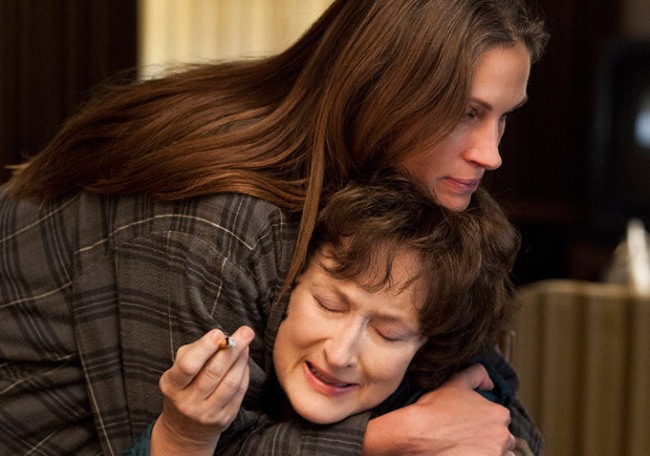 Given this problem, the question of ‘why make this at all?’ hovers over the film despite its glamour and cleverness.

That there is this much to say about August: Osage County makes it a good film, do not be mistaken, and I relish my observations and thank Letts for his opening his veins for us all to see, because no doubt he does reveal something fascinating regardless of intention. August: Osage County is intended to showcase all that has gone before it, from a critical standpoint, and it is successful in its aims, even if they are a bit OTT. I can’t compare the film to the play, as I’ve never seen the play performed, but I can’t imagine that will change my opinion, because my criticism depends on a character in both, and on the heavy-handed symbolism that to my understanding has been successfully converted. Letts self-consciously litters the film with signposts that point at his symbols, at once a self-critique (he is an interesting writer, no doubt about that) and a commentary on the circular foolishness that academia can get bogged down in. Sam’s death, a suicide performed in a river that usually flows right on by him, when he is  drunk, is the ultimate symbol of this American obsession with the deep water of its own soul, and its inability to read it, and its one of the more subtle and therefore more powerful in the film. 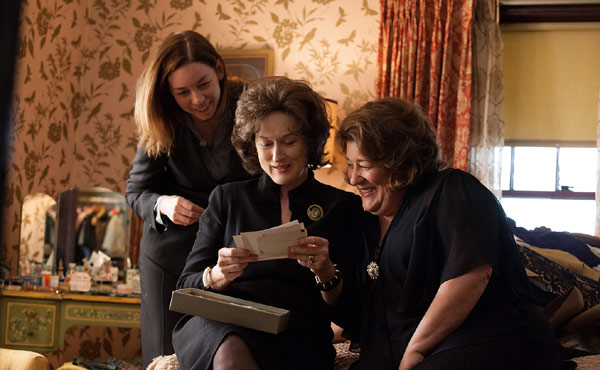 I can’t really discuss a film like this without mentioning the performances of course. Meryl Streep is excellent as Violet Weston, nicely balanced against Julia Roberts as Barbara Fordham, and the pair push their opportunities while remaining in control resulting in charmingly camp performances that add something interesting to the characters. I won’t head off into it now, (I’m conscious I’m already over 900 words) but Violet is so many of those American film icons, the most obvious being the Crawfordesque caricature portrayed by Faye Dunaway, while Barbara is a kind of Letts, confused by her own anger, terrified she will become her parents. Much has already been made of all the excellent performances, with Abigal Breslin nicely cast as Jean (she is little miss sunshine after all) and Margo Martindale Chris Cooper sublime as Charles and Mattie Fae Aiken. It’s great to see Juliette Lewis, even if Karen isn’t a particularly great character, and Benedict Cumberbatch (a Brit who plays an American nightmare very well) and Dermot Mulroney are great as the unfortunate love interests. An interesting piece of casting is the very british Ewan McGregor as the out-of-place horrified observer Bill Fordham, giving rise to the idea that if Bill was British it might have given Letts a better observational character than Johnna – whatever – McGregor doesn’t quite fit in, sometimes looking like a weak link, sometimes properly fulfilling his role as a flawed voice of reason. The unfortunate character of Johnna is given to Misty Upham and she does well with the stereotype. The whole Sam Sheppard thing is another layer of symbolism the play definitely did not need, but I can’t help but have sympathies for the temptation of putting him in the role of Beverly  – It’s something I would have fallen for myself.

The film is unashamed oscar-bait, Letts seeking an adaptation Oscar to add to the sag of his August: Osage County self at home, Streep another nomination, Roberts a reminder she’s not just a pretty woman, and John Wells credit for straddling theatre and film. Harvey Weinstein is as open about the crawl for Oscar glory as usual. On that note, it is one of the best theatre transition pieces you will see, and credit does go to Letts and Wells for that, because it’s a wordy work. They’re all likely to get nominated, and Lett’s is lucky Woody Allen has com up with his usual trick of pretending his source material doesn’t exist, so Letts won’t be pitted against the obviously Streetcar-esque Blue Jasmine, unfortunately giving us two Tennessee pseudo rip-offs sitting next to each other. That’d be a little like turning up in the same outfit.

← 2013: A Magic year in Film – Films that were duds, dodgy or just bored the hell out of me. The Hobbit: The Desolation of Smaug – Peter Jackson steps into the light. (Film review) →