Posted by lisathatcher on December 6, 2013 in Articles

The Old Fitzroy Theatre has been home to some of the most wonderful theatre experiences I’ve had in 2013. Standouts were Friday, the recent King Lear I really enjoyed and the very touching An Ordinary Person was a theatre evening that remained in my mind for days. In 2013 The Sydney Independent Theatre Company was appointed as residents and managers of the theatre space at The Old Fitzroy Hotel, itself a historical icon to Sydney-siders, and they’ve brought out a 2014 program that ensures The Old Fitzroy Theatre will be one of the spaces to be in the forthcoming year.

There are many reasons to love independent theatre, but one of my favourites is the proximity of audience. Intimacy with a stranger is an experience y0u can get no where other than sitting in a room while the finest actors perform, and it’s magnified when the audience is small and close. The space at The Old Fitzroy Hotel is the perfect size to allow significant numbers to see a show, and still retain that remarkable quality of communion that only small theatre can really provide. If you aren’t afraid to really feel your art, then the Old Fitzroy theatre is for you. 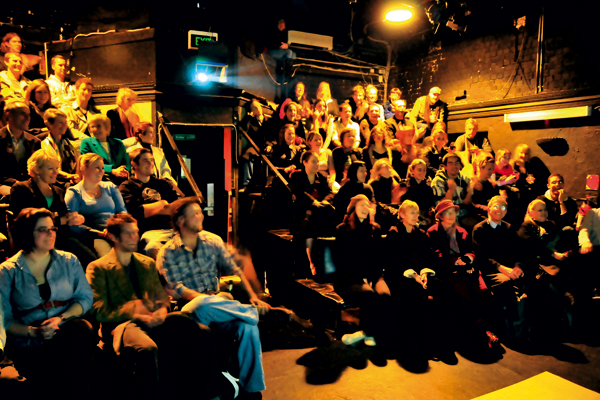 As for the 2014 programe, all I can say is bring it on.  If 2013 was a great year for them, 2014 is sure to be better.  My suggestion is to book early for any shows that tickle your fance and of course, as always, keep an eye out for my reviews.

Produced by Brevity Theatre Co and directed by Richard Hilliar

A thought provoking take on literature, history and the world we live in through the medium of a Hamlet/Faustus

The unreliable hyperbolic reminiscences of the greatest Australian who ever lived!

Produced by Decorum, directed by Lex Marinos and performed by John Derum

Everything I Know I Learnt From Madonna

written and performed by Wayne Tunks

An autobiographical emotional story of life and loss interlaced with those Madonna lyrics we all know so well.

to the one stage.

(I saw this at the Sydney Fringe in 2013 and highly recommend it!)

Tidy Town of the Year

A Moment on the Lips

It’s the odd moments and the little things.

Risk versus reward, tyranny and pacifism, institutionalism and the nuances of contemporary sexual mores.

Shortlisted for the Rodney Seaborn Playwrights Award in 2009.

Scenes from an Execution

Produced by No White Elephant and directed by Richard Hilliar

Brad’s out of marriage and into social networking.

Produced by Kore Productions and directed by Samara Kinney

A play to remind us all that FAN is short for FANATIC!

Play Me, I’m Yours

The life and death of a piano and the generations of people who played it.

Produced by subtlenuance and directed by Paul Gilchrist

In 1431, Joan of Arc was burnt at the stake. Fifteen years later, she was back.

The God Of Hell

The greatest American playwright of his generation … As hilarious as it is sobering.

A play to be announced