Primer – Shane Carruth and the art of deception. (Film Review)

Posted by lisathatcher on December 4, 2013 in Film Reviews | 1 Comment

So it might seem possible, that as we advance in science and technology, we might be able to construct a wormhole, or warp space and time in some other way, so as to be able to travel into our past. If this were the case, it would raise a whole host of questions and problems. One of these is, if sometime in the future, we learn to travel in time, why hasn’t someone come back from the future, to tell us how to do it.  Stephen Hawking (Space and time Warps)

The story goes, it always slightly irritated Shane Carruth that when scientific breakthroughs were “discovered” in a film, the discovery was embellished with neon lights, in all-white labs by people in odd-looking space suits with some sort of permanent access to the latest and greatest equipment. In reality, that almost never happens and real scientific breakthroughs happen when men in white shirts and a tie (apparently) work on a project in their spare time and accidentally discover something ‘miraculous’ (excuse my use of the ‘m’ word here). Therefore he wanted to make a science fiction film that, rather than being set in a future so remote we can’t refute it, is set the present,  in suburbia and these physics heroes are family men experimenting together in their garage. “Science” lands on them like a meteor and they are unprepared for the consequences of their discovery. Carruth is also, like so many sci-fi fans, a little irritated by Hawkings oversimplistic characterisation of time travel as immediately newsworthy, so Carruth creates the scenario where a time traveller might not feel compelled to “come back from the future to tell us how to do it.”

The trick with setting a film about a bunch of physics geeks who accidentally discover time travel in the present is, the detail. One of the tropes of sci-fi is the assumption that something as undiscoverable as time travel was discovered so long ago, there is no need to explain it as it is no longer an exciting concept. It’s a brave writer / director who makes a film about the discovery itself and the immediate consequences. But Shane Carruth knows us better than we know ourselves. It’s a question of ratios: what percentage of molecular physicists would see the film against how much physics jargon he could toss around in order to sound convincing. This question creates one of the most interesting aspects of Primer as a film.  The dialogue, composed almost entirely of scientific jargon is detailed enough, patchy enough, believable enough and compelling enough to force the audience to want to keep up and to assume any holes in the logic are their own. Because of this premise, the set up is in place for Carruth to create a convoluted pathway for Aaron and Abe to follow in their time travels to protect the films authenticity against repeat viewing. The result is, a film that everyone thinks treats them with great intelligence, when its more accurate to say Primer treats its audience like the fools they are.

This is not intended to sound as bitchy as it does. On the contrary, it places Carruth up there with the great directors and writers who can take advantage of universal human flaws to create mood. Carruth’s mastery is not in his study of physics to create compelling dialogue, nor is it in his ability to make a great looking film on a $7000 budget (although these are two noteworthy accomplishments) it is in his talent to manipulate his audience, and he does this unapologetically and relentlessly, something he has always claimed Primer is truly about. In the end we are forced to feel what Abe and Aaron feel, the utter confusion associated with technology that has left our grasp, coupled with the almost panicked desperation to hold on to the ephemeral. We all know this feeling, and we all try to hide this feeling every day.  It is the mood we recognise and love about Primer, not its characters, about whom we care less and less as the film progresses,  or its plotting which becomes so convoluted that charts are required to map its main points. 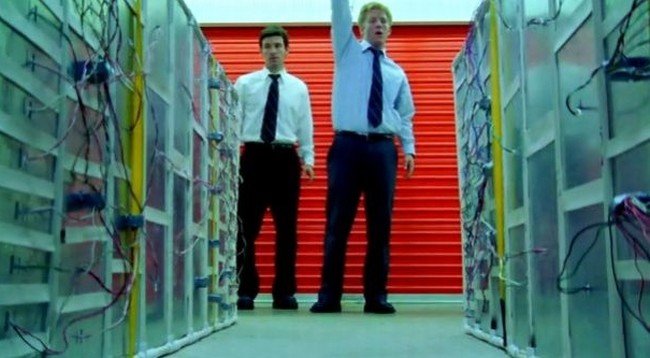 There was some criticism about the look and the feel of Primer when it first came out (2004) but this I would have to disagree with.  Some nuances that (paradoxically) anchor it in time such as the costuming which makes them all look like they are off a Seinfeld set and the rather awkward habit Carruth has of slowly dishevelling Abe and Aaron’s clothes as they get more and more uncomfortable with their situation. The costume alteration idea is shared with another time travel flick of the same time, The Eternal Sunshine of the Spotless Mind, in that film it is Clementine’s hair colour, in Primer it’s the state of their clothes, giving us signposts as to which version of the protagonists we might be looking at, and I found this strangely obvious for Carruth’s style and therefore it incompatible with the film, but it does give us a hint as to what might have been discussed in those mysterious internet time travel forums in 2004. Mostly impressive in the visuals is Carruth’s ability to get so much intense and interesting shots out of a suburban garage and an empty storage facility. 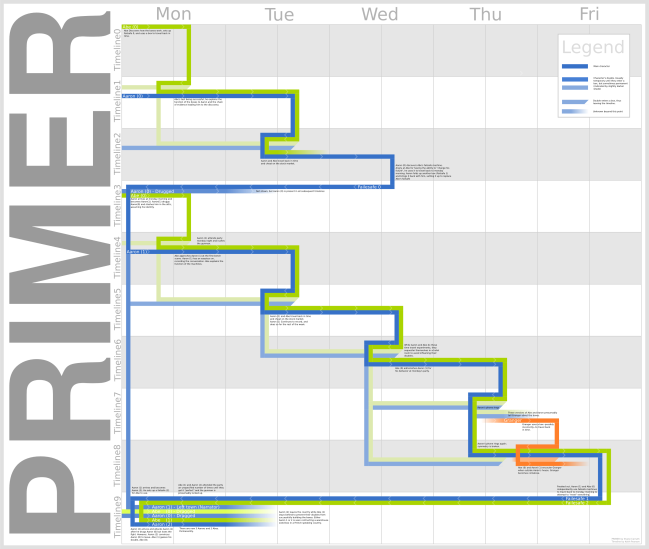 Carruth went on to make Upstream Colour over ten years later, a better film but only because it is developing a deeper awareness of the talents he displayed in the first, which is the remarkable ability to read his audience so clearly coupled with a potent work ethic that wants to evoke mood. He has another film he’s been working on this year, The Modern Ocean that is one of my most anticipated films for 2014 – but knowing Carruth, (which I do not at all of course) it may not stick to my deadline. His talent for unrelenting perfectionism will bring The Modern Ocean out when The Modern Ocean is ready to come out.