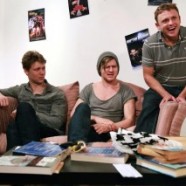 Posted by lisathatcher on November 29, 2013 in Articles | 3 Comments

The back of the downstairs theatre at the Tap Gallery is covered in A4 sized colour images of films, albums, and odd bits of iconography that represent a mood and a philosophy rather than a time or place. At first they look like a teenagers bedroom, the images internet-stolen, hand printed, blu-tacked to a wall, but soon they distance themselves from the play performed in front of them, and become the enveloping sweep of the non-space in which everything happens – gaps in time, meanings between the lines, memories, imaginings, the concept of a never-ending universe and so on. They transform without movement throughout Triune to become a symbol of our constant fascination with issues such as time travel and memory – acknowledging that memory is a kind of time travel – and the idea of changing events once forewarned. 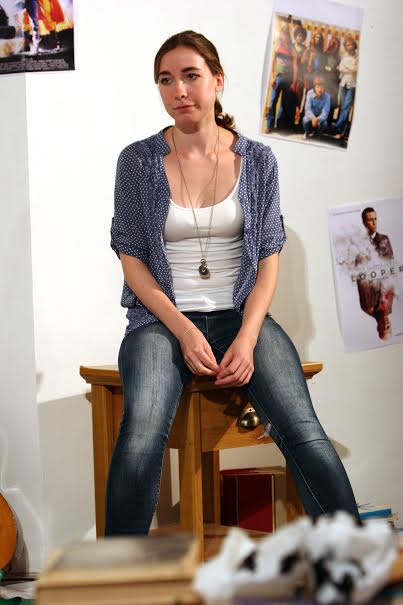 Triune is the new play by the production company Brave New Word, who perform completely original works, often workshopped and written by all the creatives involved. So as the play refuses to be bound by the conventions of what we (for comforts sake?) called ‘reality’ so does the company itself, seeing their work as perpetually evolving, words not trapped by their print on a page, nor by a singular vision. Just as the protagonist of Triune grapples with self awareness in an alternate dimension, so Brave New Word endeavour to embody their theatrical pieces in an alternate creative space, always seeking to bring disparate minds and visions together for a transitory moment that belongs to experience and very quickly memory.

Triune opens with Sam plucking away at his guitar on the couch of his living room. He’s had a big night, his head is foggy and his day is anchored only by his repetitive day-dreaming. He quickly falls into an argument with his long-suffering girlfriend who turns the petty irritations of relationship into major issues, as one does when one can’t find or face the words it takes to describe the death of a relationship. Quickly she is out the door, and Sam is left alone with himself. A large thunderstorm brews outdoors, to match his mood, and in the course of the day he decides he will gather up the mementoes of his failed relationship and burn them on the floor of his apartment, possibly in the hope that his memories (and the dreams and longings attached to them) will burn with them.

Without going into detail that will constitute a major spoiler, Sam is suddenly confronted by himself at the age of eighteen. The mementoes he gathers which are now symbols of failure, are still symbols of hope for the younger Sam, who has his life mapped out and expects all of it to be fulfilled according to plan. However none of younger Sam’s expectations included what the Sam before him has become and the pair begin to argue about life and choice, control and power. Then, just as lightning strikes, they are confronted with Sam at the age of thirty-three, and this is when the concepts really get interesting. Twenty-five year old Sam is torn between coming to terms with his failed expectations and moving on, or taking up an opportunity to get his life right a second time around. 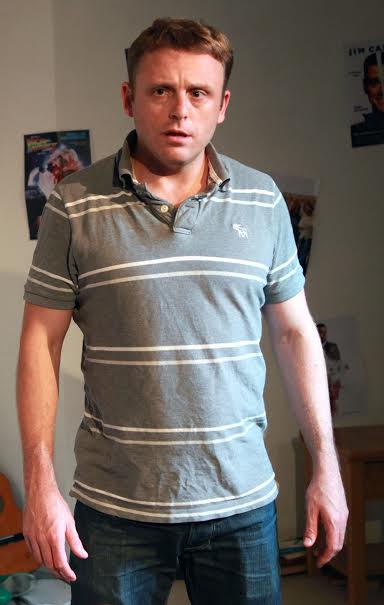 This is a clever script that never loses grasp of its complicated themes, although I would have liked it to go for longer than an hour (always a good sign) and perhaps paced a little more carefully so that we get to enjoy all the complicated ideas that are so beautiful bound up in the dialogue. Because Triune was written collaboratively, Brave New Word chose to acknowledge everyone equally in the program credits, and they list as writers: James Culbert (who also plays Sam at twenty-five), Nicole Dimitriades, Simon Gleeson (who plays Sam at Thirty-three), Luke Holmes (who plays Sam at eighteen), Nick Radinoff and Ava Strangherlin. A lovely Charlie Hanson wanders in and out of reality, memory and the future as the lucky and unlucky girlfriend of Sam, Penelope. Her calm centred presence is posited against the almost hysterical Sam at his various ages, and she moves easily into her different dimensions with grace. The background images, as I said above, become a sort of silent guide of where we are allowed to go as we concentrate, and this works very well with the fast complex dialogue. The heaviness of the subject matter is balanced against a very funny script that pits the same man against himself at different ages, as each incarnation alternates between happiness, horror, fear and helplessness. The three actors are good likenesses, but even as they embody Sam, they also become their generation, older preaching to younger that a life in the suburbs is not as abhorrent as he might think and the younger filling the others with hope for a better life that they had abandoned.

It’s always tricky when you take on themes like, fate, destiny, determinism, memory, archetypes and surrealism but Brave New Word do this with competence and fun and offer an excellent hour of fascinating, thought-provoking theatre.

All photography credits for this blog post go to David Hooley.

Triune is on at the Tap Gallery from 22 November to the 7th of December. You can grab your tickets here.

← The Counselor – Cormac McCarthy and Ridley Scott bring writing to front and centre. (Film Review) Closed Circuit – John Crowley and the film that should have been better. (Film Review) →