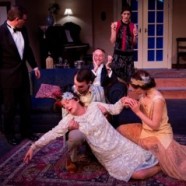 Hay Fever – Noel Coward, The New Theatre, and the joy of the Blisses. (Theatre Review)

Theatre legend has it that Noel Coward’s Hay Fever, and Noel Coward himself, stopped being popular with the rise of play writes such as Harold Pinter in the 1950’s, largely because funny was not seen to equal deep or complex. And yet, after a revival of Hay Fever in the 1960’s (the play was written in the early 1920’s) a new sheen covered the play, and what once was considered frivolous now appeared deeply insightful of its day, if not prophetic about the future. F.Scott Fitzgerald is not the only writer who could see the ‘Roaring Twenties” with great clarity and Noel Coward was soon seen to be a bit of an Oscar Wilde when it came to witty and cutting observation. Plays like Blithe Spirit and Easy Virtue have held their place firmly, as has the clever and witty Hay Fever, the story of the Blisses. 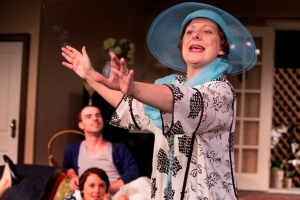 But what makes Hay Fever stand the astonishing test of time so well?  It is funny to be sure, but on the surface it can seem a little like a one-gag-show with the theatrics of Judith Bliss and the way they bleed into her relationships with everyone around her, carrying forward into everyone elses attempts to relate to her family. There has rarely been a more amusingly selfish family than the Bliss family, unashamedly collecting people like trinkets on shopping sprees, using them till boredom sets in and then literally forgetting about them. The weekend long party held at their country home is a constant comedy of errors as the family of Judith, David, Simon and Sorrel spins to their own orbit, collecting their guests and discarding their guests with equal verve and speed, with plenty of clever lines to keep the audience laughing and plenty of comical egoism to keep them amused. 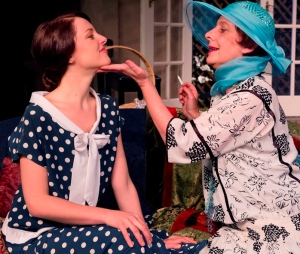 But Hay Fever is not a one-gag-show, and the key to this revelation lies in the performances. Hay Fever is a character driven play all the way; Judith Bliss was even based on a great actress friend of Noel Coward (Laurette Taylor). Hay Fever throbs with the real life and vibrancy of a writer who loves his characters, despite their very many flaws.  Throughout its life, the key to the play has been its actors, with great names like, Maggie Smith, Derek Jacobi,Lynn Redgrave, Campbell Scott, Judi Dench and Diana Rigg being associated with productions through the years. The reason for this popularity with actors lies in Coward’s brilliant writing, and the complicated ways that the Blisses interact, with each other and with themselves. Coward successfully captures the spirit of the 1920’s, not only with the stoic judgement we have come to expect from writers like Fitzgerald, but the very soul of that carefree generation. Through Coward’s eye, the 1920’s isn’t just about wealth, prosperity and recklessness – it’s also about dramatic presence of the individual, over any sort of self-examination. 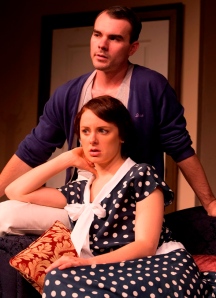 It is this spirit of showmanship, this idea that a person is perpetually on a stage, even when they lack an audience, that Coward captures so well in Hay Fever. The actor is supreme, needing neither writer, nor director, being able to play their own version of “all the worlds a stage” in a literal fashion. This is what the Bliss family brings, a lot of separate performances acted for the sole purpose of entertaining a fluctuating and often non-existent audience, weaving in and out of each other in a way that resembles relationship but never actually achieves it. Yes Hay Fever’s cleverness lies in its wit and comedy of errors, but its enduring nature lies in its ability to perfectly capture a period in time when image was everything, the trials of life were laughed at (and treated as inconsequential) and selfishness was the result of unconsciousness. The Bliss family think they are entertaining, when really, they are simply brattish. 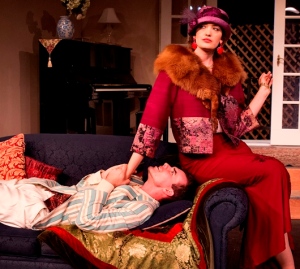 The New Theatre in Newtown have had the wonderful idea of putting Hay Fever on in the same year that Baz Luhrmann brings out his Great Gatsby, another one of those famous representatives of the fabulous twenties. It’s a fantastic idea, because comparing the two productions (even if one is film and the other theatre) gives complimentary insights into the era, as well as completely different interpretations of the patterns of selfishness of the wealthy at that time. And yet where Fitzgerald paints a portrait of thoughtlessness and selfishness, Coward portrays a more calculated giddiness with selfishness at its heart. Watching Judith Bliss, its hard not to see her behaviour as rehearsed, her every response calculated, her every feeling deliberately dramatically enhanced. Where the Buchanan’s seem to be reckless, the Blisses seem to be making a demand that the world curve toward them, place them at the centre of the universe, because reality is only what you make it. 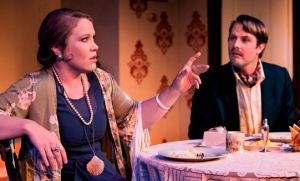 Of course none of this is possible if the production isn’t spot on, and Rosane McNamara’s Hay Fever excels due to its attention to detail. McNamara directs as well as coordinates the elaborate costumes, and plonks her gifted cast on a transporting set by David Marshall-Martin.  But as fine as the creative team are, Hay Fever is a play for actors, and McNamara has collected a strong cast who have so much fun with the play that the joy spills out over the audience. Alice Livingstone is superb as the infamous Judith Bliss, sexy, bold, silly and daring, the lynchpin for all the plays foolishness. Jorja Brain and David Halgren are perfect as the brattish and brilliant Bliss youngsters and James Bean is an excellent David Bliss, tricking us with the hope he’ll turn out to be sensible. The rest of the cast is as strong as the leads, with special mentions to Tess Haubrich as Myra and the only person capable of some sort of Bliss control, Sharon Olivier as Clara. 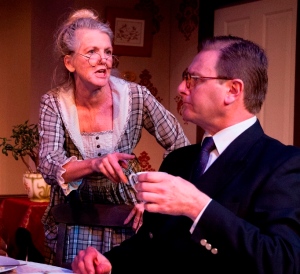 It’s a wonderful night of theatre, as Noel Coward always is, and the timing to see it this year is perfect given the attention to the other great writer of the era. Hay Fever is on at the New Theatre from October 8 through to November 2. My review has come out at the end of the season, so you had better be quick to grab your tickets here. 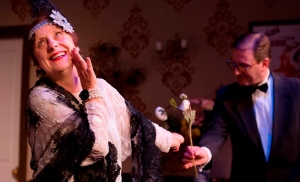 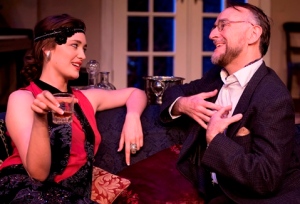