Posted by lisathatcher on September 13, 2013 in Film Reviews

I wasn’t going to see Elysium until I’d seen District 9, which reportedly is the far superior film, and looks it from the trailer. But my viewing got all screwed up recently and I found myself at the movies with a ticket and Elysium the only film on the bill I hadn’t seen. And so Elysium was watched. I still wish I’d broken my Neill Blomkamp cherry on District 9, but I did enjoy Elysium more than I thought I would, and perhaps this has a lot to do with the fact that I haven’t seen District 9 as yet. Strikingly, its wonderful to be thrust into a contemporary Sci Fi film these days and be forced to deal with contemporary issues like the old sci-fi films of the 1960’s and 1970’s. I also felt that I saw a little bit of a Tarkovski homage in there at times, particularly Stalker, in the way Blomkamp infuses his sci-fi with meaning.  Not that I think Tarkovski would like the “wham-bam-thankyou-mam” approach to lessons learned. 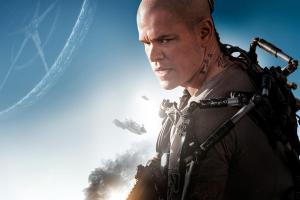 Still, despite Elysium being very in-your-face and violent, Blomkamp’s messages of the rights of refugees, xenophobia, greed, totalitarianism, health care and environmental decay come through strongly in the blockbuster.  I had the uncomfortable feeling all the way through that I lived in Elysium and Jodi Foster was Australia’s newly elected Prime Minister, who got in on a “stop the boats” ticket. Much of the rhetoric surrounding the maintenance of exclusivity in Elysium was used in our campaigning, and I know what Blomkamp means when he says Elysium isn’t about the future, it’s about today. Australia is one of the Elysium’s of the world, a utopia where health care is free and delivered by one of the best health systems in the world. Like the citizens of Elysium, Australia does not want to share its wealth or extend hospitality to any other than those who agree to maintain the standards precisely as they are currently established. Like Elysium, Australia assumes all those not from Australia are suspect in some way, almost inhuman and their desire to get into the country only reinforces this belief. 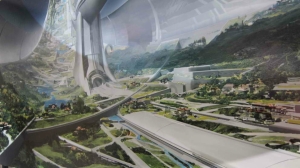 Blomkamp’s questions around health care and policing are interesting.  Not only is the free accessible health care on Elysium, but it is also superior health care, the cures and medicines on offer are far more advanced to those on earth. People are freely offered drugs to deal with nervous disorders or mental discomfort on earth which keeps them from getting into too much trouble; trouble meaning staring at the “have’s” and wanting to be one of them. The police force are a mechanized group of robots who can’t think, but use the law to maintain a certain perspective.  The force is used to keep people quiet and filled with fear.  Their “presence” is seen as a deterrent and this is upheld by their inability to negotiate or communicate from the particulars of each case.  Bloomkamp dehumanizes the force, but the rules they operate under are the same as any thin blue line in countries where poor and rich come uncomfortably close.  Though the degree of distance varies, this includes all countries. 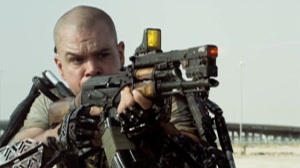 The only “rights” to Elysium are to have been born there, but of course the flip side of that, is that you have all your rights stripped if you weren’t born there. Birth-right is a very big deal in our world these days, and we wear the symbols of our birth in our facial features.  You don’t have to be a certain colour to get into Elysium, but you do have to act a certain colour. Australians have just elected a Prime Minister who is anti choice. Choice, it seems begins to matter a great deal after a child is born, and what determines its future is its mothers marital status, the colour of her skin and shape of her eye, the part of town she gave birth in, her proximity to work, her years of education, the size of the queue at her overburdened hospital, and the amount of drugs being used to keep consciousness at bay around her. Our new Prime Minister raises his fist to remove her ability to prevent a child from having to live under that burden, but with his other fist he makes the walls between he and she higher and more closely policed. This is the open and shameless desire for an underclass; drugged, uneducated, and unable to protect themselves from a rule of law used to keep them in place with fear. 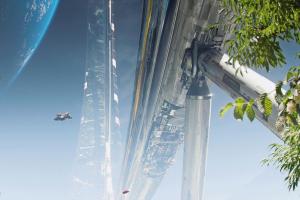 It’s been quite a while since sci-fi film makers have been so preachy, but it is at the very heart of all great science fiction to be more about our present than our past. From Hal’s secret mission in 2001: A Space Odyssey, through the limits of rationalism in Solaris to the cry of Charlton Heston that Solylent Green is people, though I have to confess I’ve rarely seen such surface level contemporary issues so clearly defined in a blockbuster as I have with Elysium. Blomkamp wanted independence when he made the film, mostly because he was terrified with having to water it down, and given the subject matter I can understand that. When Sony bought the rights, Blomkamp has claimed in many interviews that he was terrified of losing control when he had to cast big budget actors, but Jodi Foster and Matt Damon (both class acts) reportedly made no demands on script changes nor on their living and working conditions. In the end Blomkamp said he rather liked the idea of plonking a huge American star in the middle of a Mexican slum.  Apparently the toxicity of the real rubbish dumps were so chronic, false rubbish had to brought in.  (The above is taken from two interviews; the Guardian, and The Telegraph.) 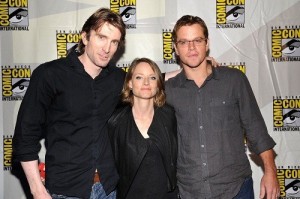 I understand District 9 examines the same issues Elysium does, in a superior film with stronger indie cred, but Elysium has its place, if it is a watered down version, because there are so many people who can’t access District 9 (for many reasons) but can get close to Elysium. A brief glance at some of the You Tube comments revealed the message is getting through. It’s exciting to see a sci-fi thriller so well made with such a strong uncompromising message, and it does make Blomkamp a director to watch. 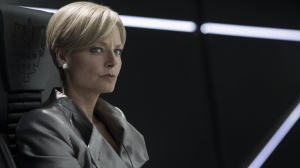 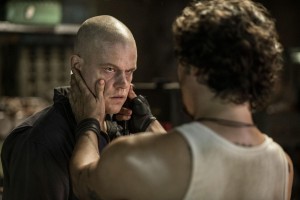 ← John Dies at the End – Don Coscarelli takes on David Wong. (Sydney Underground Film Festival Review) A Sign of the Times – Steve Helper and the moment before we act. (Theatre Review) →