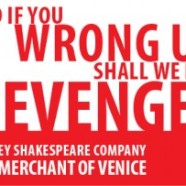 Hath not a Jew eyes? Hath not a Jew hands, organs,
dimensions, senses, affections, passions; fed with
the same food, hurt with the same weapons, subject
to the same diseases, heal’d by the same means,
warm’d and cool’d by the same winter and summer
as a Christian is? If you prick us, do we not bleed?
If you tickle us, do we not laugh? If you poison us,
do we not die? And if you wrong us, shall we not revenge?
If we are like you in the rest, we will resemble you in that.
If a Jew wrong a Christian, what is his humility?
Revenge. If a Christian wrong a Jew, what should his
sufferance be by Christian example? Why, revenge.
The villainy you teach me, I will execute,
and it shall go hard but I will better the instruction.
(Act III, scene I)

The Merchant of Venice is an odd play, difficult to adapt and perform in any era. The controversial role of Shylock, a Jew used in the play as the ultimate symbol of the dark side of money and power, is always a complex gamble for an actor and a director to take on, and this seems to never change no matter where we are in history. The arguments about Shakespeare’s overt antisemitism in the play and whether we are to take this at face value or see it symbolically, metaphorically and ironically will go on into the future just as they have raged in the past. What remains is the beautiful language, and the magical Shakespearean depths that make all his plays so interesting and complicated.

Ultimately, The Merchant of Venice is a play about money and power. Money used to buy people, sell people, trick people and exact revenge against people. The power in The Merchant of Venice moves around like currency, first here, then there, then over there, then back here again as each character hold it for a moment and gives it in trade for something else. Money is also used to humiliate people, and not just the unlucky Antonio or the Fleetingly fortunate Shylock.  Bassanio is at first humiliated that he does not have enough money to buy his way into the gamble that will win him Portia, and later humiliated that he has too much and can’t do anything constructive with it. Portia’s father has used money and power to place Portia in a strange game of chance that humiliates her and ties her a game to decide the rest of her life. Jessica doesn’t just run off with the Christian Lorenzo, but to add insult to injury, she steals the money her father would have refused her, humiliating her father. 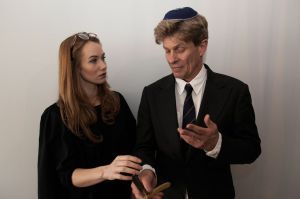 And yet through all these dark themes emerges a funny comedy of errors of sorts.  The Merchant of Venice is, strictly one of Shakespeare’s comedies, but made famous by Shylocks “Hath not a Jew eyes” speech and Portia’s “Quality of mercy” speech.  In the performance currently underway at the Tap Gallery, under the direction of Steven Hopley, The Merchant of Venice is playful and very funny despite its problematic racial overtones. Watching this performance (with its excellent cast) and encountering the strange chance in nuance between racist comments, repressed homosexual longings, general gender bending and well timed hilarity, one starts to get the impression it was all one big laugh, and perhaps one of Shakespeare’s inside jokes is that we will be fighting and arguing over The Merchant of Venice forever. Shakespeare powerfully preaches mercy and respect for the other over the letter of the law, and at the same time ads one of a societies deepest fears – the dispossessed alien in search of a home. A RICH dispossessed alien in search of a home.

The Merchant of Venice hinges on a crucial quibble delivered at the right moment, and the way Steven Hopley directs this performance, the quibble is brought to the fore and seems to exist in a way throughout the play.  Mind games and word games are consistent themes, with the word constantly meaning something quite different to the intention behind the delivery. It is when the words written on the chests are taken literally that the Princes of Morocco and Arragon miss out on Portia’s hand and it is only by reading the precise wording of their conversation that we miss the desire Antonio has for Bassanio. Portia accuses Bassanio of lovelessness because he removed the ring that was always to remain on his finger, yet if he didn’t deem the ring so very valuable, he would never have felt it was a high enough price to pay the doctor for the rescue of his friend – the doctor who is Portia really. Portia herself uses the quibble to reduce the power of Shylock and yet if they were to continue revealing quibbles, Portia would be exposed has having no real power in the court room… and on it goes.

Assisting Steven Hopley in this fantastic performance is an outstanding cast, the center of which is Mark Lee as the luckless Shylock. Lee’s performance is sympathetic, but not without bringing some malevolence to Shylock so that he is never rescued by the audiences sympathies, but we see him in the context of his own behaviours. Lee is larger than the character in that we see all Jews and their constant problems associated with displacement through Shylock. Very strong also is Lizzie Schebesta as Portia, a commanding presence, delivering a part that can at times be a little confusing, with clear precision and charisma that drew all eyes to her. The rest of the cast are all right on target giving powerful support and witty delivery of the traditional lines. Stephanie Todd’s setting is minimalist, giving the full weight of the production to the very capable actors and the beautiful words they speak. The Sydney Shakespeare companies The Merchant of Venice is a wonderful opportunity to see a very interesting Shakespearean play with a superb cast who really know what they are doing. 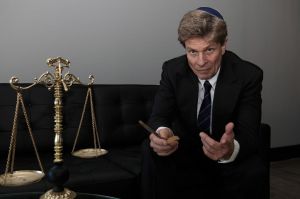