Home » Book Reviews » May We Be Forgiven – A.M. Homes and the post modern ‘after’. (book review) 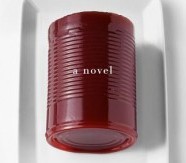 May We Be Forgiven – A.M. Homes and the post modern ‘after’. (book review)

Posted by lisathatcher on August 12, 2013 in Book Reviews

In a rather broad brush stroke of a statement, one of the problems I have with books written by women is the reluctance to expand into universal themes, or send their novel to the far corners of the universe in its scope. I say this is a broad brush stroke of a statement, because it’s based on the comparatively few books by women I am able to read (compared with how many are written) and my current (always changing) position on female modesty – or is that the anti-male-centric, anti-competitive artistic movement? (if such a thing exists) All these ideas get tangled up inside me as I read through as much literature as I can, but I still find it difficult to “place” contemporary female literature; and of course the broader cultural criticism is no help with its disproportionate adulation of books written by men, or its refusal to engage with books written by women in a general sense such as this Wikipedia page that lists almost no books written by females in its list of post modern examples of literature.

You can imagine how thrilled I was, given this ridiculous premise I live under (and I am sure many readers will argue all this doesn’t exist, but it is emphatically my experience) to read May We Be Forgiven by A.M Homes, a book written in true post-modern absurdest style dealing with the contemporary version of the antidote to post-modern angst – ‘drug-the-fuck-out-of-it’, along with the deterioration of our political system, and the phoenix like rise of the blended cross-cultural family out of the ashes of the obliterated traditional family. May We Be Forgiven is a truly contemporary novel, beautifully written, using as broad an appeal that can comfortably exist within the (implied) structure of the introspection of the post-modern novel. Alienation and anxiety are treated with medication these days – to the point that Don DeLillos Eric Packer riding around in his Limo living in a suspended animation seems almost quaint with all the lengths he goes to in order to feel. If angst is the result of feeling, “why feel?” is today’s mantra, the pharmaceutical industry being one of the most powerful and important industries in the world.

“Claire, who leaves nothing out of place, nothing to chance, always on it. What I liked about her, of course, became the problem-she wasn’t there. She asked very little of me. And that meant she wasn’t there and gave very little back.”

” “You’re brother killed his wife.” she says. I take a breath. “My brother isn’t able to come in and check out books himself, so I’m getting these for him.”  “I’m going to mark the card as stolen – Charges could be filed against you.” “For what?” “It doesn’t much matter what,” the librarian says. “We live in a litigious society.  It’s how people express their anger. And it would be a blot on your record.” “Give me the card back.” “Oh no,” the librarian says. “It says right here on the back that the use of the library is a privileged that can be revoked.” “If it’s not my card, how can it be revoked?” “Lack of use.” she says. “Is it my subject matter? Is there something about Nixon that you don’t like?” “No.” The librarian says. “Its you. It’s you that I don’t like.” “You don’t even know me.” “And I never will.” she says. “Go. Leave before I press charges.” “for what?” “Harassment.” “

“If you’re wondering what this new found energy is all about, all I can say is that I’ve gotten particularly attached to a bottle of small round blue pills I found in Georges’ bathroom, the bottle marked “1-2 daily upon awakening.” I take a couple and for about five hours I’m amazingly organized. In an effort to recognize what it is I”m taking, I repeatedly Google “little blue pill,” but all i get is ads for Viagra, which is not round but diamond shaped.” 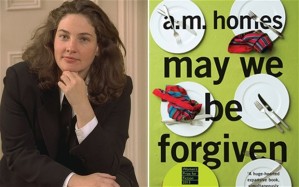 The central premise of May We Be Forgiven is the demise of the American Dream brought to the fore primarily through the ongoing discussion of Richard Nixon, the protagonists (our) fascination with him, what he stood for and what he came to represent – a man defined more by his errors than his accomplishments. This is the plight we all face.  Those we love lick the wounds we inflicted on them, rather than bask in the glow of the times we have loved them. Relationships are fractured, fraught and happen almost in spite of our inner self. If one of our contemporary desires is to be seen, to be understood, May We Be Forgiven suggests the flip side of that coin is the criticism we avoid because people do not know and understand our true heart. At the throbbing pulse of relationship is blame, fear and an anxiety that is willing to deal out great pain in its quest for self-protection. Harold has need of forgiveness. From whom and for what is unclear although a list for each could be made if one were pressed. Harold has to get on with it despite this, and it is in the doing that his redemption of sorts lies. The ultimate redemption he seeks, freedom from himself, will never be granted, but he can at least create relationships of value with those around him.  Something he was incapable of prior to his own development and realization.

“It is my sense that Nixon was besieged with a guilt about his family, particularly the two brothers he lost early in life. And in the dark days of my own recent family drama, I think of my relationship to my own blood and the meaning of being thy brothers keeper – literally. I think of my own marriage failing in this public debacle.  I consider Dick and Pat and their fortitude in the face of all that we knew and didn’t know about them. I think of my rage at being trapped in this life, inexorably of my own making.” I pause for breath. “Pardon the digression. There are paths, forks in the road, journeys, we must make. Sometimes it’s not a choice but about what we do with what we are given.”

“He was the perfect storm of present, past and future, of integrity and deceit, of moral superiority and arrogance, of the drug that was and is the American dream, wanting more, wanting to have what someone else has, wanting to have it all.” 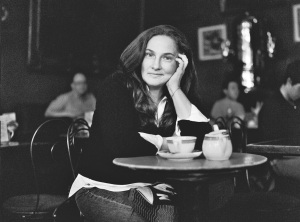 Harold is writing a book about Nixon titled: ‘While We Were Sleeping: The American Dream Turned Nightmare—Richard Nixon, Vietnam, and Watergate: The Psychogehic Melting Point“. DeLillo, acknowledged as a master by Homes is Joyce to her Beckett, the shoulder upon which she stands, and the pad from which she launches. She praises DeLillo in the above link to an interview for being able to weave fictional narrative with historical fact.  Of course DeLillo is also one of the central names in the post-modern cannon, and in many ways May We Be Forgiven is a stand on the shoulders of the classic post modern novel while teetering on the edge of an absurdity that tips its hat toward magic realism in some of its more extreme moments. In this way, Homes allows for the experience of living to impact on the observation of it, as if the two co-exist rather than the extremes of “one or the other” literature has suggested in the past. For Homes, the solution to the problem of existential angst is the journey of the day-to-day. Harold does think too much, but he also self medicates against depression; he resists finding meaning in his life, but he takes delight in right action; he finds life absurd and meaningless, but engages with a form of rapture at his brief moments of connection with others. It is the small, insignificant details that become the everything that is the antidote to the nothing.

“Because of the woman I met at the A & P, because of Ashley, because of Jane, because I am now more awake than every before, because I can’t stop thinking…  There is a world out there, so new, so random, so dissociated that it puts us all in danger. We talk on line we “friend” each other when we don’t know who we are really talking to – we fuck strangers. We mistake almost anything for a relationship, a community of sorts and yet when we are with our families, in our communities, we are clueless, we short-circuit and immediately dive back into the digitized version – It’s easier because we can be both our truer selves and our fantasy selves all at once, with each carrying equal weight.”

Despite the cleverness of the prose and my overall high impressions of May We Be Forgiven, there are some very odd moments. The book is wrapped up fast – too fast given the pace of the earlier chapters and too neatly, given the points and perspectives of the novel. It’s almost as though Homes struggled with the end, but that, on its own makes sense. There is an extremely odd moment in Africa that feels tacked on and steals from the expanse the book created. Also, I have read and this I would agree with, there is a surprising amount of violence toward women depicted, which seems unnecessary. For me, these were small issues, given the overall weight, purpose and strengths of the narrative flow. May we Be Forgiven is a very serious book couched in a very funny narrative, and its a great pleasure to read. May We Be Forgiven won the Women’s prize for fiction in 2013 (formerly the Orange Prize) and can be purchased here. 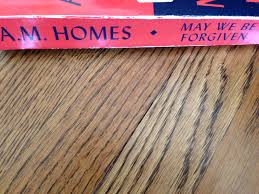 “We’re bad,” Ashley whispers to me. “Just listen to all that we have done, all the harm and trouble we cause.”

I sober up for a moment. “We’re human Ashley. We atone, because, despite our best efforts, we always do harm to others and ourselves. That’s why each year we ask those we have hurt for forgiveness, and each year we present ourselves to God and ask to be forgiven.”

She starts to cry.  “It’s just so terrible,” she says.