Posted by lisathatcher on July 13, 2013 in Articles

It is often thought that if you put a human being through the most trying circumstances you get to see what they are made of. The assumption is, the more pressure you apply, the more strength you will get in response. This is an observation made by witnesses, not protagonists, because only as the observer are you given the opportunity to marvel. What is more likely the case, is we witness the adaptability of the human species. It is not the human being that transforms into something powerful at the pressure point, it is the dramatic deterioration in their environment and their ability to carry on normally that makes them look as though they are doing something extraordinary. A doctor performing dangerous surgery in a war zone might be unconsciously taking  comfort in the routine of his job. To save a loved one, friend or other human from attack is an act of hope; a kind of refusal to accept the reality of the situation. These behaviors can be an attempt at freedom.  Not denial, but a kind of refusal of the severity of the circumstances.

This subject fascinates Dimitri Armatas who has written a somewhat gentle and very insightful tragedy about a family locked in a cellar in occupied Poland in 1942. In the very small, intimate setting of the Tap Gallery downstairs, the audience is given immediate and distinct access to the feeling of being held up in a very small bunker for neigh on three years, which is when we meet this family of four.  What stuns us initially is not the difficulty of the circumstances as much as the families ability to adapt to their surroundings. They sew, chatter, make love, dream of better things and reminisce about the past.  Of course, what they chatter about is whether their beloved men folk will make it home alive today, and what they dream of is a full and proper meal and the chance to see some sunshine. But still, instantly striking is the families power to remain stoically a family as it is, no matter where it finds itself situated.

Dimitri Armtas captures this elegantly in the wonderful production, Haus, currently showing at the Tap Gallery.  A normal family, complete with their hopes, their dreams, their love for each other and their secrets find their world changes overnight;  as Jews in occupied Poland, their lives are at risk. They run to hide, and end up taking a bunker built by another family for that other family. Like a starling, they take the nest and live their tormented existence there. We don’t know much about what happened to the other family, but the parallels between ‘occupation’ are interestingly developed by Armatas. Occupation can be a means of death, a means of life in suspension or even the small space taken up by a pre-birth child, finding the strength to enter the world. The four people who live in this cellar occupy it, each other, their individual baggage and the skin that gives them away as enemies of the governing forces.

All the inhabitants of this secret world are family. A husband and wife, her sister and brother. As we watch, the family go through the inevitable collective experience of those living so close for so long, but they each have their moments of deep confront as an individual, and it is their ‘roles’ in the family that will tie them to sanity. Despite the small underground world, life and death are never far away and it soon becomes apparent the dangers of  world above has followed them into their small safe place. Armatas creates two worlds in a way.  The ‘out there’ of occupied Poland and its inherent dangers, and the ‘in here’ of the suffocating bunker and all its inherent dangers. Then there is the ‘out there’ of the role one plays within in the unit in order to help the group survive, and the ‘in here’ of the death and transformation of each individuals inner world as the outer world encroaches and defines.

Cleverly, Armatas makes the small stage-room almost seem like a puppet theater at times, with its curtained diagonal sides and small candles at the front. This family of four, trapped in the small basement, their mental strings held by German guards with permission to kill them at will, seemed to be going through emotions completely forced on them by their situation; the war defines everything about them from their frayed clothes and scant food through to their overarching fear and loss of quality of life. Any courage or fortitude is equally a product of the war and the horror of their circumstances. The choice to hide, Armatas seems to say, was a condemnation to loss of choice. Freedom means living in conditions that might be worse than the prison. All they are assured of is their life, and given what that has come to represent, it is a small victory.  As one character says to another “I might live and have no life”.

Essential to the successful execution of Armatas’ words and direction are strong performances that comfortably carry complicated accents and dialogue heavy scenes in the small room. Zacharie Di Ferdinando is a commanding Heinrich, a German who committed the crime of falling in love with and marrying a Jewess. I saw him a few weeks back in No Exit, and he makes a very comfortable transition to the role here. He is not just husband to Maria, he is father to the younger two who haven’t married, are brother and sister, and still need a little life guidance. Ferdinando convinces us with a performance that makes him appear to be a man almost twice his age, tormented by his own sense of right and wrong. His wife, Maria played by Jorjia Gilllis is his practical mother-figure-wife who helps him in establishing order in the strange small home.  She is stronger than anyone else in the very small room, and she carries a secret that could mean the end or the beginning of better things. Milos is her younger brother, charmingly played by Paddy Lester.  Lester has a smile that can make the sun rise early, and one feels instantly deeply engaged with his tragic Milos.  Rounding up the family of four is younger sister Helena.  Ruth Murphy brings a wistful soul to Helena, and Armatas makes her a moral mouthpiece of sorts, as she cries not for what they have lost but for what they may never find. 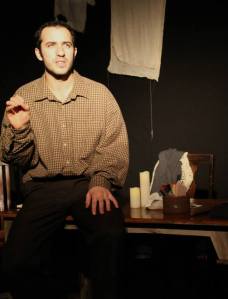 Haus is a wonderful piece of theater very well crafted by one of the Sydney scenes bright young hopefuls in Dimitiri Armatas.  It has a short run at Tap Gallery. Try to get there this weekend. Tickets can be purchased here. 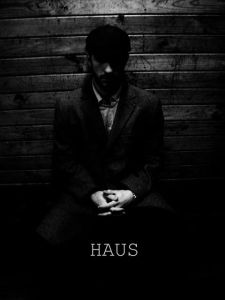 ← Rocket Man – Paul Gilchrist, Subtlenuance and the enormity of our stories. (Theatre Review) Behind the Candelabra – Steven Soderbergh and the ‘appropriate gay’. (film review) →
Loading Comments...