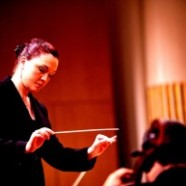 Posted by lisathatcher on June 30, 2013 in Music Reviews

The Aim of The Metropolitan Orchestra is to bring premium quality orchestral performance to more audiences, thereby inspiring a love of classical music. It was launched in 2009 and since then has continually brought superb intimate performances to a wide range of Sydneysiders across the metropolitan area. If it is true that art is brought alive by the listeners, then the relationship TMO is creating with its audiences is an expansive exploration of what is possible between the listener of traditional and other forms of concert music.  I saw TMO on a Sunday afternoon in Balmain town hall, a lovely but very public building. The orchestra’s performance, which I will go into below, didn’t just choose two formal pieces of traditional classical music to book end its ‘event’ composition in the middle of the performance, it also retained all the concert hall formalities of performance from dress to the entire structure of the performance itself.  This means people wearing jeans, damp from running to the town hall in the rain, clutching bags sitting in the body of a flat hall, get the entire orchestral experience from evening dresses through to conductor veneration. The result is an extraordinary intimacy that is encouraged by the willingness of the orchestra and its special guests to move about, take a tea or coffee and in some cases a Saturday night drink with the audience. Where the structural formality of orchestral concert can be sacrificed in moving towards society, TMO choose instead to give society the full experience, only moving physically to share the space.

What this melding of the two types of people in the room does, is bring all the focus squarely upon the sound. TMO is a first class orchestra, so the sound has the perfect roundness that one comes to a live performance to hear.  Under the direction of Chief Conductor Sarah-Grace Williams the concert hall atmosphere and sound is brought to the more localized venues, and even in one particular case, the football field. None of the important visual code of live performance is sacrificed for the change in venue, so each venue and its inhabitants bring their own kind of listening to a performance that assumes their intelligent listening ability. The result is a lovely event lifted and transported by the power of the sound and the elegant beauty of the performance in a kind of social conversation with its many and varied audiences and surrounds. Venue is always important to the production of fine music, and Sarah-Grace Williams has the warmth of heart and skilled control to allow every venue to use her to create its own version of the music. 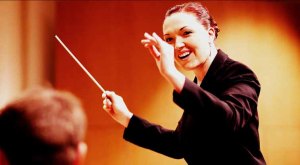 The program I attended started with Mozart’s melodic and familiar Eine Kleine Nachtmusik  and ended with Haydn’s Symphony no 104 ‘London.’ I’ve added both the pieces above and below this paragraph to remind us of the beautiful sounds. The middle piece was the world premiere of a Chamber concerto for Marimba and orchestra composed by the extraordinary Daniel Rojas who was celebrating his birthday  as well as acting as announcer for the start of the concert. The two traditional pieces were exceptionally executed with small in-house jokes and generous enthusiasm for an audience that may have wanted something melodic while they had the chance to be in front of such an impressive orchestra. The town hall was filled with the joyous banter of Mozart’s so very famous piece. The fluid movements of Williams shone above the room as she stood on her stand before the talented and the skilled as they followed her every move.  The audience was captivated, almost holding their breath in time to her gentle hands, inhaling with a mighty passion as she, elbows out, engulfed the orchestral sound in her arms that rose into a mighty swell echoing throughout the music. At times she looked like a music box dancer, her movements so graceful and dance like and her facial expressions so noble it was hard to believe she was real. The concert was perfectly rounded out by the back to roots melodic paradise of Haydn.  (I apologize if the videos have ads in them)

But the piece we were really there to hear, and the absolute standout of the immaculate performance was Daniel Rojas composition written specifically for Claire Edwardes’ marimba as conducted by Sarah-Grace Williams. Despite the varied structures of the three movements, Rojas kept the tonal centers in D, G and E to be emblematic of the initials of the key collaborators of the work: D for Daniel Rojas, G for Sarah-Grace Williams and E for Claire Edwards. The entire room bristled with excitement when Claire Edwardes in a flowing red gown made her way to the stage at the back of the orchestra where the marimba stood like a uni-coloured rainbow ready to award us an aural pot of gold. Rojas sat a few seats back from Williams, so when Edwardes started to play his music, there seems to be an electric thread moving a dynamic stream from Edwardes straight ahead to Williams and through her to Rojas. From his mind the stream and music burst like sunshine to fill the room with the realization of his composition. It was thrilling to witness so much intimacy between three artists, made all the more private by the respectful public gaze.  I sat behind Rojas and to his left, but I found my eyes running constantly between the three of them, always ending up back at him as he sat still, eyes closed, and felt his creation brought to life by so much talent, and such an empathic enthusiastic audience. 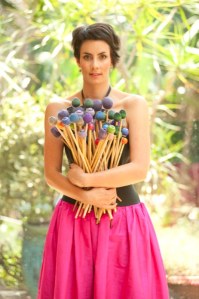 If you’ve ever seen Claire Edwardes play her marimba you will know what I mean when I say her performance was clangorous, a completely bewitching experience where sound can almost be felt. Watching her conducted by Williams and the magnetic current that moved between them made it easy to understand why Rojas felt compelled to write directly for each. His first movement, Serpentine is a direct reference to the sinuous Amazon rivers with spices of Afro-Cuban influence peppering up an Amerindian base. The second movement, Ebb he explained was a deeply personal response to the introspection that comes with the withdrawal from youthful ingenuousness.  This was a particularly lovely piece, soft and round while still fraught and filling. The final movement, Soiree Rojas described as “an extroverted musical depiction of the kind of musical social gatherings my close circle of friends and I enjoy hosting for each other.”  Listening to this piece and imagining Rojas and his intimates sharing this at a friend’s house made me jealous at first, until the music filled me with the overwhelming sense of joyful friendship Rojas experiences.  At that moment I felt like one of his friends, there to share his birthday, witnessing the remarkable musician friends who inspire him.  It was a magical way to round off a beautiful afternoon of orotund, majestic musical enlightenment that is part of the shared beauty of TMO.

TMO is seeking funding currently.  If your business would like to be a part of one of the most moving cultural events in Sydney, you can contact TMO here. 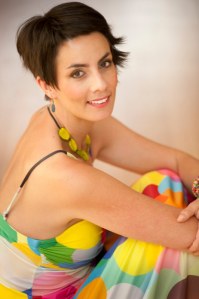