Posted by lisathatcher on June 28, 2013 in Articles

Mark Ravenhill’s Shopping and Fucking has often been criticized for its lack of subtlety, which is odd, given the title alone should inform you subtlety is not an aim of the writer. It was written in 1996 and considering its subject matter, I’d place it more at a cross section between Mike Leighs film Naked (made in 1993) and the New French Extremity popular in the 1990’s. Frankly, to criticize the play for its speeches, its opacity and its backwards glance is to miss the point entirely, a point brought to the fore in the excellent new production by Sly Rat Theatre. Shopping and Fucking is after the ilk of The Marquis de Sade, Georges Bataille and Orwell’s 1994 where the first two use sexuality and long speeches to make political points, and Orwell uses extreme plot points and even longer speeches to make his point. (I’m aware that I have now compared this play to films and books rather than theatre – but that was where my mind when while watching.) When you read each of these writers through the backwards glance, they range from faintly interesting to downright absurd, ill-conceived and offensive.  When you read each of these writers as prophetic, their work takes on a depth and indeed a subtlety that is not immediately obvious.

So it is with Shopping and Fucking. The clever people of Sly Rat Theatre have brought the much maligned play to life in a disturbingly fine production currently showing at NIDA’s Parade Theatre. Focusing on the themes of delusion, nostalgia and hope, adding a surreal setting by director Alan Chambers and emblematic costuming by Clare McCutcheon the more prophetic aspects of the play are brought to the fore, so that it seems less steeped in a post-punk-post-thatcher British decline and more housed in a contemporary tech-obsessed pre-apocalyptic alienation. Punk is deliciously absorbed into its natural future where squats, free lust and drug experimentation simply are not affordable; not to mention how damned expensive punk got if you wanted to keep up with the hair and the clothes and the music. Money colonized everything and the post 9/11 world looks less like the ignoble decline punk anticipated and more like the ugly progressive commodification of the simplest of pleasures. There is a brilliant twist in Shopping and Fucking at the end of the play when a lesson is “taught” in the most harrowing, confusing and psychologically traumatic way that addresses psychic depths of the horrors of commodification that punk never imagined existed. Seen through the lens created by Alan Chambers and his superb cast,  Mark Ravenhill becomes a perverse and unrelenting examiner of the human condition, far beyond shock or schlock. 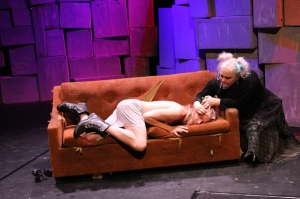 Through the vision of Alan Chambers, the words of Mark Ravenhill and the work of Sly Rat we have a wonderful crossroads where humanity and capitalism just can’t connect. It never should have concerned us that we might lose our “morals” after Nietzsche declared the death of god, as capitalism steps in as the new nanny state.  Now your sweetener has no sugar, your coffee no caffeine, your cream no fat and your bread no gluten. You have to save up to buy your recreational drugs, but can’t overindulge because you have work tomorrow. We all know the great joke where people stand still on a moving walkway to make their way to a treadmill where they get their daily exercise. This is the world where music videos are both the add and the product, and where facebook makes you feel like its doing you a service even though you bring its customers and you provide its content. We now know, just as Mark Ravenhill told us all those years ago, the late 1960’s hippies and the 1980’s punks were fashions, not philosophies.  Pubs have to toss out their best customers when drunk. The strongest argument for maintaining the illegal status of marijuana has always been keeping it in control of the local smoker; legalization will inevitably lead to huge tobacco conglomerates exploiting vast fields of workers to give you inferior dope stale with age, off the shelf. This is Mark Ravenhills key point in Shopping and Fucking, and prior to the elegance of the production of Sly Rat, it has largely been missed. (as far as I can tell from the reviews)

Commodifictation robs everything of its essence, whether its fucking or shopping. To bring this point to the fore, Alan Chambers and Whitney Richards have created a sparse, cardboard construct of a stage (little houses made of ticky-tacky) where the worst in human bargaining, and negotiating can take place. Its the lighting by Stephen Warren and the lovely sound of Andy Harmsen that act as counter point to the constantly eroding, confused manipulated human subjects. Another key point of the play, is the work for the betterment of the child ethic. “You are improving this child’s life if you make money” is held over the heads of our protagonists, whether it is getting money for music lessons by selling phone sex or recreating a brutal rape to fulfill an abused child’s fantasy. Mark (Giles Gartrell-Mills), Robbie (Joseph Appleton) and Lulu (Katherine Moss) are constantly tossed on an ocean of conflicting and confusing ethics, dreading the lack and absence that comes with real choice. Mark will try to embrace choice, but for him it eventually comes back to having to give up too much – not the dope, but the accoutrements of the lifestyle; friends, safety, solidarity and mindlessness all standing in for a love he knows can never be fulfilled. When money is as its tightest, can they really damage a prematurely wounded soul for money?  Yet, when a girl in a corner store is being brutally attacked, it’s the opportunity to steal chocolate from her hand.

Two satellite performances by Steve McCall as Brian and David Ryan Kinsman as Gary strongly represent the codified, chattel-style relationships of the “outer” world, posited against the full blown human creatures that are Mark, Robbie and Lulu. Brian is probably the most familiar character to everyone in the audience, in a way a stereotype, but also the face of “kind capitalism”, seeming out of place, and yet in control of far more than we realize. McCall plays him like a non stop advertisement, easy to see through and yet impossible to ignore. He’s the monster we created intentionally.  His opposite, Gary is the monster we created unintentionally. He is the empty, soul-less stepchild of the capitalist monster, that had been raping him for as long as he can remember. He will now pay to get more of what will hurt him, and he has plenty of money. Brian will see to it that the job is always needed, and Gary will see to it that the willing customer is always available. Ravenhill keeps the characters off to the side, and McCall and Kinsman play them almost like extremes, cartoons, facsimiles of what they represent.

Alan Chambers has an excellent cast all round, with the stand outs being Katherine Moss and Joseph Appleton as the slippery sliding victims of financial loss, gain, loss and gain. Their stunning visual presence is overwhelming, both putting everything they have into the roles so that one feels immersed in their ugly on-the-edge-of-nothing world. Giles Gartrell-Mills is a commanding Mark, and really the plays protagonist as the person desperate to take control of their life, finding there are no rewards for presence of mind. Between Clare McCutcheon’s dystopian costumes and Andy Harmsen’s very specific sound design the characters are squashed (like the rotten tomatoes that land on them) between beauty and ugliness, humanity and contrivance and consciousness and unconsciousness. (Andy Harmesen’s sound is rather amazing actually, and something Id like to listen to outside of the play’s context.  Notice it if you are lucky enough to attend.)

Get along to this version of Shopping and Fucking if you can.  Unlike the protagonists, your spent dollar will reap great reward. Buy your tickets here.

← No Exit – Celine Oudin and John Paul Sartre and the problem of the gaze. (theatre review) Why I won’t be reviewing Terrence Malick →
Loading Comments...
Comment
×