Oh Boy is showing at the Sydney Film Festival. You can get your tickets here.

There is an amazing combination – Tom Schillings face, Jan Ole Gerster‘s love of Berlin, the music of the Major Minors and the dotted cameos of famous German actors – that goes into making Oh Boy more than just another well made slacker film. The heart behind it comes through in an enveloping warmth that makes Oh Boy a semi-tragic-feel-good comedy ride to somewhere, rather than nowhere. I love coming of age stories that focus on the Saturn Return period.  The age between twenty-eight and thirty-one when we really grow up.  For me this was a far more formative development than moving from early to late teens, and remains one of the most interesting times in a persons life. 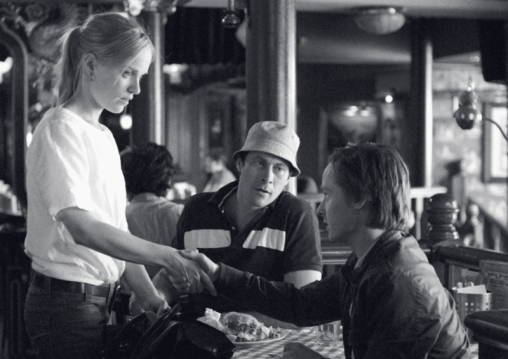 Oh Boy is the brain child of Jan Ole Gerster when he had to complete his thesis project for the German Film and Television Academy in Berlin. It’s made in black and white and its intention is to snap shot a slice of Berlin that is moving toward lost. I was fortunate enough to attend a screening where Gerster was in attendance and he told us the story that, when he arrived in Berlin thirteen years ago, everyone there said he was ten years too late and that he had missed the real glory days of the cultural throb there. He jokingly says he relays the same message to new arrivals now, claiming they are now too late.  Soon he claims, Berlin will have turned into a new sort of thing.

Oh Boy is not the examination of where Berlin is headed, but rather, the Berlin he has loved and where it has been.

Niko Fischer (Tom Schilling)  dropped out of law school two years ago, but still collects his weekly allowance from his father who is putting him through school.  The film opens with Niko breaking up with his girlfriend, mostly because he can’t be bothered to run his relationship properly. His relationship in tatters, he leaves the apartment and begins a journey through Berlin where he, at its most basic, tries to purchase a cup of coffee and is thwarted in this endeavor every step of the way. On his twenty-four hour journey he will bump into a variety of characters who take him to different parts of Berlin. Actors playing various roles that he will bump into include Steffen Jürgens, Arnd Klawitter and Justus von Dohnányi. Each character represents an aspect of Berlin culture that is changing. In a particularly funny scene, Niko and his friend Matze (Marc Hosemann) attend a dramatic dance performance that they giggle through.  The theatre that they sit in has been an important part of Berlin’s underground theatre for many years, and it has recently been sold to build apartments. It is the spirit of the time when he was a Berlin film school slacker, in love with his city, that Gerster captures.

If Gerster doesn’t touch on the future in Oh Boy, he does touch on the past and the transition between times. The film is littered with references to the second world war.  In some cases this is part of the comic narrative and in a poignant death at the end, it is used as part of the theme for the pain all German’s share. Berlin isn’t actually in the walls and the streets, but it is in the hearts and the minds of Berliners.  It is this mindset that Gerster laments in this ode.

All of this seriousness aside however, Oh Boy happens to be a funny film. Schilling has received huge acclaim for his role, and he is wonderfully funny as Niko.  He and Gerster are friends, and initially Gerster didn’t want Schilling for the role as he looked too young, but (as the story goes according to Gerster) Schilling wanted the part very much,  feeling almost as though it were written for him, and because it was by his friend and their youthful days, Schilling drank and smoked his way into an older look. By the time we get him in the black and white there are heavy circles under his eyes and his long lanky hair looks like it needs a wash and a cut. He’s right, he is perfect for the role. Its his face, his dead pan look, his slight body and his quick wit that bring the script alive and do justice to Gersters words.

But the real star of this film is Berlin. Gerster films her as if she were his mistress, gently, loving and seductive. Train tracks are everywhere, showing us a movement Gerster can’t put a stop to.  By his side is DoP Philipp Kirsamer, using everything Berlin has to offer in the crisp black and white to put into image the enormity of Gerster’s feeling for his beloved town that can’t be put into words. It’s all there, it’s all heart and it’s all Berlin.

Oh Boy is showing at the Sydney Film Festival. You can get your tickets here.