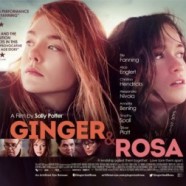 Posted by lisathatcher on June 8, 2013 in Film Reviews

Ginger and Rosa is currently showing at the Sydney Film Festival.  You can buy tickets here.  Please note, this review contains spoilers.

“My dear Ginger.  Can’t you be a girl for a moment or two longer?  You’ll be a woman soon enough.”

The casting of Elle Fanning, a twelve year old girl, as the sixteen year old Ginger taps into a powerful contemporary global debate across the Western world and indeed, confronts an even more complicated discussion all the world over regarding the sexualisation of young girls. Regardless of how many people say Elle Fanning plays a teenager perfectly, she never looks like a sixteen year old girl (breasts do not a woman make). The presence of Alice Englert along side her – a “real” sixteen year old girl is all the comparison needed to see the difference in the face of a twelve year old and the face of a sixteen year old. Englert’s sullen self involvement is the perfect counterpoint for Fanning’s childish glee, and is essential to the point Sally Potter is making with the film Ginger and Rose. Yes, this is a coming of age film, but it is also a film about the way we see and conceptualize teenage girls.

Initially, Potter frames Fanning as a cherubic beauty, while Englert (herself very beautiful) is painted the “plainer” looking of the two girls. We are meant to see them as interchangeable, however. Like all Potters films, this is not one that skims the surface of its rather recognizable narrative. Rather the narrative is an excuse if you like, a cover story for what is really going on. Although Ginger and Rose might be Sally Potters most accessible film, it is a mistake to see it as her lightest. The hints are everywhere but no where are they stronger than in the child like facial features of Elle Fanning, so easily sexualised, when surrounded with the cameras frame. Her hair itself is a frame, isolating her face from the womanly body that’s developed ahead of its mind. 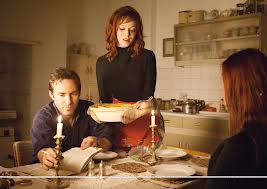 Also poignant is the casting of Christina Hendricks as Natalie, Ginger’s mother. The same flaming red hair frames the face of the woman and the child, but where Elle Fanning is a child that we are seeing as female, Christina Hendricks is a sex symbol we are seeing usurped – there is no famous female more “traditionally shaped” than Hendricks, and yet even she can’t compete with societies odd sexualisation of the girl-child. Natalie is best friends (that female bond men can find so threatening) with Anoushka (Jodhi May) Rosa’s mother.

Like all little girls who haven’t properly grown, the childish Ginger flirts with her handsome, revolutionary father Roland (Alessandro Nivola is excellent in the role) a man who has a perverted weakness for young girls on the verge of growing up. The year is 1962 and crucial to the unfolding of events is the fact that Roland has all the language he needs to declare his ideals and glorify his weaknesses, while his wife Nathalie (A woman he made pregnant when she was a young teen and then kept in the house preventing her from her own artistic fulfillment) has no language to express her dilemma. She complains that he doesn’t appreciate her cooking – he will counter argue that cooking is facile, while what she really meant was that he should appreciate what she has done for him in lieu of her self-fulfillment. He will openly flirt with his daughter in front of her, and then when it is illegal for him to sleep with his daughter, he will take his daughters best friend and make her pregnant as an act of obscene aggression against the women in his life. In this way, he ruins the deep, close friendship of his wife  and the deep close friendship of his daughter, instantly placing himself  in control of all of the women. It’s an insidious emotional crime – one he feels justified in committing because he went to jail as a conscious objector.

What Roland is never willing to do until its far too late, is take responsibility for his actions, and this is the problem of all men attracted to girl-women. There is a refusal to accept that it is his problem, a defiant stand against taking responsibility for his own desire, which (as Roland will declare to his weeping daughter) is completely out of his control. The girls will play out their pain through Roland – Rosa trying to replace a father that abandoned her and her jealousy of her best friends happy family by sleeping with her best friends father, and Ginger by full immersion into the world of politics which at that time in history, meant the Cuban Missile crises and the fear of global annihilation via the threat of atomic bombs. Her immersion is an attempt to show off to her father but also to beat her father, take his place as an activist and forge her own path.  Instead, her father, who has language on his side, can check mate her by leaving her mother (the women she thought she was competing against for his affection, and can easily beat) and making her best friend pregnant.  Although everyone calls her Ginger, Roland named her “Africa” after Freud’s theory of female sexuality being as mysterious as the dark, unexplored continent itself. Essential to an understanding of Freud (and Potter knows her Freud well) the unexplored sexuality of the female is primarily so because of a language deficiency. 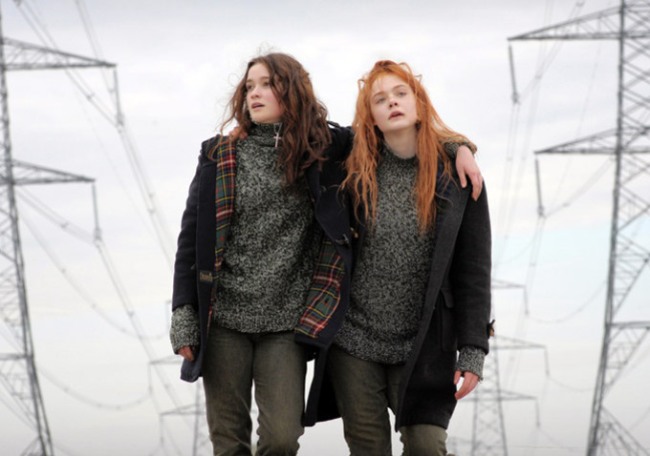 Potter is a provocative film maker, and an underrated one. Ginger and Rose is likely to be primarily misinterpreted because Potter is subtle and complex in her film making. However it is well worth the visit.  If you are not entranced by Potters analyzing, at least you will find the performances outstanding.

Ginger and Rosa is currently showing at the Sydney Film Festival.  You can buy tickets here. 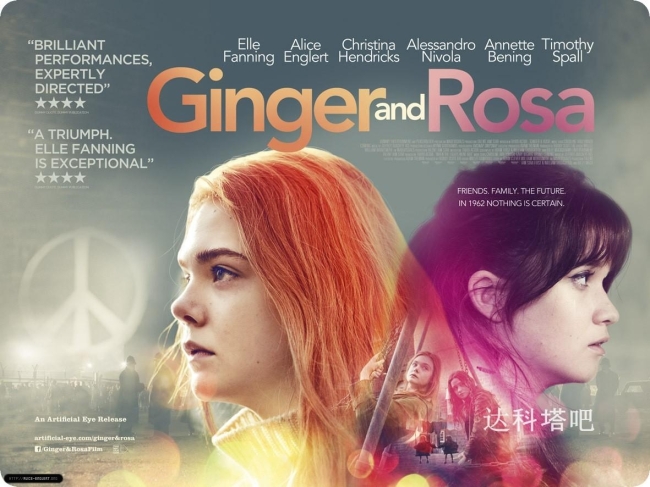