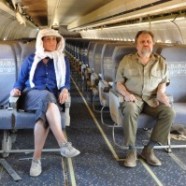 The Perverts Guide To Ideology – Slavoj Žižek says we are responsible for our dreams. (Sydney FF Film Review)

This is a review of The Perverts Guide to Ideology which is showing at the Sydney Film Festival. Grab your tickets here.

I already am eating from the trash can all of the time. The name of this trash can is ideology. The material force of ideology makes me not see what I am effectively eating.  It’s not only our reality which enslaves us. The tragedy of our predicament when we are within ideology is that when we think that we escape it into our dreams at that point we are within ideology.

Sophie Feiness and Slavoj Žižek who gave us the popular and successful The Perverts guide to cinema are back with another (little over) 2 hours of Lacanian film analysis and far left socialist common sense. For those of you who were enthralled by The Perverts Guide to Cinema, The Perverts Guide to Ideology will not disappoint.  Just as before Žižek will don the costumes and mysteriously infiltrate the sets of some of our most beloved cinematic moments, gleefully and fearlessly stealing our innocent enjoyment of films like The Sound of Music, West Side Story, Jaws, I am Legend, Titanic, Full Metal Jacket, MASH and Brazil.

According to our rational view, ideology is something that we see as interrupting our clear view. We see it as something imposed from outside.  We see it as a pair of glasses that we are forced to wear, that when we remove we see things clearly.  This is inaccurate. Ideology is our spontaneous relationship to our social world and the way that we perceive meaning. we, in a way, enjoy our ideology. To leave your ideological impulses is painful.  it hurts us. spontaneously we live in a lie. The truth can be very painful.  You must be forced to be free.

The film starts with a brief explanation of how ideology affects us under capitalism. As subjects, we are encouraged to enjoy – enjoyment being the most important component of our desires. We are shown that enjoyment is not the same as simple pleasure.  Enjoyment is connected to our desires, the root of which is the promise of fulfillment, never fulfillment itself. Therefore the pursuit of enjoyment is an endless one, where the product never quite matches up to its promise – so we reach to buy another. We are always encouraged  to go out and enjoy. Žižek uses The Sound of Music to explain the subversive aspect of Catholicism that offers absolution for your sins, rather than enforcing restriction as is the common understanding.

Psychoanalysis tries to get us to distinguish between enjoyment and simple pleasures. They are not the same.  Enjoyment is precisely, enjoyment in disturbed pleasure. If you want to properly understand the attraction to Catholicism, it is not in the prohibitions, it is in the absolution’s. Rather than offering a series of restrictions, Catholicism claims to offer absolution’s. You are covered – go and enjoy.

Jaws is then pitted against Triumph of the Will and Cabaret to reveal the way propaganda works. When Fidel Castro first saw Jaws, he argued that the shark represented the endless consumerist monster of capitalism. However, Žižek reveals just as the Nazis were able to channel all the German fears into one word – JEW – so Spielberg was able to channel all our fears into one word – JAWS! It’s a lovely little piece of philosophical tap dancing that will have to reaching for your 1001 Movies You Must See Before you Die, to try to work out which films are a vehicle for government implantation and which might be exempt. It is never implied that film makers are setting out to make films steeped in ideological message delivery, but that is Žižek’s opening point. Ideology has to be accepted and then noticed. If you aren’t looking for it, you’re giving it permission to control you.

Of course, no discussion about capitalism is complete without an examination of waste, excess and the dumping of our consumerist baggage in the environment. Žižek argues that being confronted with this waste allows us to experience our selves as historical creatures with a past (that is not just in history books) as well as a problematic future. He calls this immovable waste the “inertia of the real” and goes on to show how this is depicted in films such as I am Legend.  He will extend this idea and loop back to the original with the concept of “petrified enjoyment” and link all this with the film Titanic. What is Titanic’s secret message?  Well, you’ll just have to see the film to find out, because I’ve given away enough spoilers.

The film will go on to describe how we are all crushed under the weight of these perpetual messages from MASH, through Batman and his battle with The Joker arriving at Milos Forman and Loves of a Blonde. These are not tenuous connections, they carry the weight of cheeky authority that Žižek conveys so powerfully through his obvious knowledge and through Sophie Fiennes patient film making.  There is a way out of this permanent billboard of an existence. But again, you’ll have to see the film to find out what Žižek claims it is.

The shoot took ten days in all, with Žižek complaining about having to do things over again, but for the most part keeping his phenomenal sense of humor – the style of which you can see as he stands in his priestly robes on the set of The Sound of Music and then seamlessly dons Travis Bickles fatigues and lies on the taxi drivers bed. Pre filming, Post production and editing was the hard work. Fiennes meticulously combs Žižek’s books for these films and offers him a script. He adds new ideas and re arranges old ideas, then they film, and then the bulk of that ends up on the cutting room floor.  Its collaborative in that it celebrates who Žižek is, but it is a labor of great love for Fiennes. Ethel Sheperd is our long-suffering editor, but the list of team members is a long and detailed one, not the least of which is Lucy Von Lonkhuy who painstakingly recreates all the sets.

If you didn’t get enough of this wonderful documentary the first time round, then enjoy the second one as much as I did. 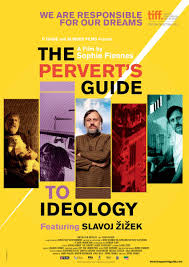