Blancanieves – Pablo Berger and the rediscovery of beauty past. (SFF Film Review)

Posted by lisathatcher on May 22, 2013 in Film Reviews

This is a film review of Blancanieves, which is showing at the Sydney Film Festival.  Get Tickets here.

It’s shocking I know, but I haven’t seen The Artist.  It has everything I love, including being apologetically French, and I am ashamed to say I suspect it was its popularity that turned me off.  This is silly, because I do get disappointed that films I think are important don’t get the audiences I think they deserve.  It’s an indefensible position, and one I will rectify.  I’ll see The Artist as soon as I can organize it.

A year after The Artist and hot on the heels of the re-imagined fairytale craze, we have Blancanieves, another black and white silent film intended to be a devotional to silent cinema of old. It succeeds in this ambition by creating a cinematic world alive only in the silent film style – I guess these days you’d call genre. I’m not very familiar with many silent films. I have a lovely Dreyer box set that I adore, and I can see a lot of Dreyer-devotion in Blancanieves, but other than that and the odd other, I’m pretty hopeless when it comes to the silent film period. One of the advantages of silent films is the universality via the by-pass of language barriers. Blancanieves is Spanish, but in a silent film, who cares?

What struck me with Blancanieves and leads me to the decision to see more silent films, is the classical drama of the presentation. While I love understated cinema (Isabelle Huppert is my favorite actress after all) I’d never fully understood the importance of the intensity of message conveyed through the silent film context. It’s not simply because it’s “fashionable” at the moment to make silent films that I describe it as a genre. It’s also because silent films bring something important to the cinematic experience that is lost when you add sound. Silent film is an erroneous description really, because the image is forced to speak.  Where language operates in multiple layers of symbols, the visual image seems less convoluted and therefore more able to carry a direct interpretation. Blancanieves brings this phenomena to the fore through a combination of two very dramatic and simple forms of communication: The nursery rhyme and the bull fighter.

By using these essences a potency is developed within the viewer’s experience of the film, which takes us to the very complication of film narrative, that of immersion. With all the digitally enhanced film making techniques these days, it takes a well written story (even within a silent film) and a director who knows what they are doing, to give us the sense of complete immersion that is so specific to film as art form. Despite the lack of dialogue (there is no voice play here as there was in the Artist, because Blancanieves point is a different one) narrative is played with.  For example, the wicked step mother is a dominatrix, and Snow White is not a passive vessel in terms of her emancipation.  She will follow in her fathers footsteps and become a bull fighter – a female bull fighter, another act of narrative play. While removing speech, Pablo Berger has spoken a new twist into old tales that suffer under the weight of their antiquated prejudices. These tales and their deconstruction become fascinating all while retaining the soft-spoken simply beauty of fairy tales and the glamorous weight and traditional power of bull fighting.

In this way, Berger’s black and white is more about timelessness and the small pedantic details in cultural narrative that become quaint (Snow Whites passivity and Bull Fighting’s cruelty) can easily be done away, without our losing precious babies in that bath water. His message is clear: refashion what was beautiful to us once – don’t eliminate it just because we know more now, for there is still something to be gleaned. Aesthetics are a complicated sea to navigate and Berger shows us that timeless beauty is genuinely timeless, even if we weren’t aware of what we had at the time. If anything, his commentary encourages us to look past the cultural surface and into a deeper rhythm of what makes us uniquely human. 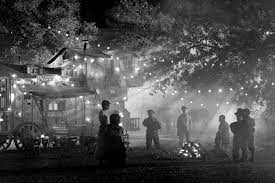 This loveliness is wrapped up in fine performances, evocative music and remarkable attention to detail in costume and set design. Pablo Berger’s PHD in film at New York University seems to have done him a huge service, distilling a thrill for detail and a passion for cinema that has turned out to be of great advantage to the film viewing public. It will be very exciting to see what he does next.

← Mistaken for Strangers – The National, The Berningers and rock stars. (Sydney FF Film Review) The Hangover 3 – What’s not to love? (film review) →