The Perverts Guide to Cinema – Slavoj Žižek and the reality of cinematic fiction. (film review)

I don’t know about you, but for me the most interesting thing about cinema both past and present is what it is saying about its audience – that is us. That’s not misplaced narcissism (and perhaps it is) but rather a fascination with the mediums ability to reveal and transform our desires more than any other cultural art form. Any reader of Freud and Lacan feels this way about cinema – but few Lacanians have the charisma and teaching skills of Slavoj Žižek.

The problem for us is not are our desires satisfied or not.The problem is how do we know what we desire? There is nothing spontaneous, nothing natural about human desires. Our Desires are artificial. We have to be taught to desire. Cinema is the ultimate pervert art. It doesn’t give you what you desire, it tells you how to desire.

And so begins Slavoj Žižek’s lecture on cinema interpreted through the psychoanalytic lens.  None of it is “true” of course, but that is the problem of “truth” not the deeply compelling arguments put forward in Sophie Fiennes (sister of Ralph and Joseph) brilliant documentary which is largely a film of Slavoj Žižek doing what he does best – not Hegelian analysis but making philosophy and psychoanalysis compelling and understandable. Despite being a philosopher of some renown, it may be that the secret to Žižek’s talent is in his ability to teach. However the premise that cinema is teaching you, in a reflexive move, how to desire, is a delicious idea that Žižek carries the viewer through from start to finish.

The first slight of hand you will experience in this fine film is the title. Pervert is and is not immediately what you think it is.  A pervert in the Freudian sense is one who conducts human behavior that is not seen to be ‘normal’. Yes this has been used culturally to refer to sexual perversion, but the definition isn’t that specific. To get even deeper into what Žižek is referencing, Freud considered all human’s to be perverts, in that we all secretly harbor inclinations that separate us from ‘normal.’ Herein lies the paradox.  To be a pervert is to be interested in that which deviates from ‘normal’ and all humans are perverts.

Desire is a wound of reality.

Work is the removal of stains.

Often things begin as a fake.  But you get caught into your own game.

Part of what makes this documentary so entertaining is the placing of Žižek in the sets of the films he is analyzing. He gleefully discusses the matriarchal influence in the birds as they attack Tippi Hedren, brought on by Jessica Tandy’s jealousy for her son, while sitting in a motor boat.  He draws parallels between the Psycho shower scene and Hackman’s examination of the bathroom in The Conversation by sitting on the very toilet that will soon spew forth its bloody evidence. He dissects our relationship to the feared immortal father figure in Blue Velvet while sitting in Dorothy’s apartment; a place he fearfully notes, where anything can happen. (the realization of our nightmares)

When fantasy disintegrates you dont get reality. You get some nightmarish real too traumatic to be experienced as ordinary reality. it is another description of nightmare.  Hell is here. Paradise is hell.

Fantasy reconstituted is the ultimate horizon of our experience.

Music conceals the abyss of anxiety. Music acts (in Blue) in the same way Marx says that religion acts, as an opiate for the people, functioning to numb the responses to the overwhelming anxiety of life.

These are the tears of happiness.,  I can mourn now, because it no longer immediately affects me. Blue proposes this mystical communion reconstituted fantasy as sustaining our relation to the world but the price we pay is that some radically authentic moment of accepting the anxiety at the very foundation of human condition is lost there. 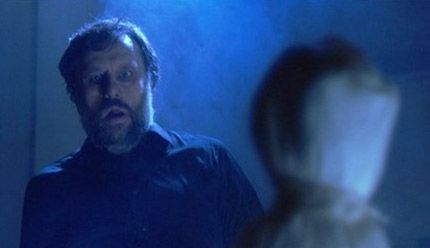 Here then are many ‘explanations’ throbbing at the heart of why the cinematic experience is so powerful. Frank Booth is not just one of the most terrifying villains in cinematic history because of Denis Hoppers acting. David Lynch has tapped into one of the most terrifying fears the human creature experiences – that of the immortal, degenerate father figure, turned on us in a nightmarish way. Kieślowski uses Julie in Three Colours: Blue as the notion of liberty because it is only when she has freed herself from the intensity of her emotions that she is able to re engage in her life and then mourn the things that happened there. In a wonderful piece of Freudian interpretation he explains Vertigo in relation to the male horror of the female subjectivity – Žižek cheekily states ‘the only good woman is a dead woman’, intending to both provoke and to be seen to be provocative by a phrase that can be easily misinterpreted. But that’s Žižek!  Cheeky and misinterpreted. I guess a lot like Freud who I would also say is cheeky and misinterpreted.

The only emotion that doesnt deceive is anxiety. All other emotions are fake. Therefore the question is are we able to confront the emotion of anxiety in the cinema or is cinema itself a fake.

Reality is an unfinished universe. It is through the idea that reality is unfinished that cinema truly became a modern art.  (the desire to reconstruct a perfect world) All modern films are basically about the possibility or the impossibility of making a film. The question of cinema is reflexive. It is cinemas job to make us still believe in cinema.

Illusion persists.  There is something more real in the cinema than in the reality behind it. The logic of demystification is not enough. The paradox of cinema is the paradox of belief.  We don’t simply believe or not believe. We always believe in a conditional mode. I know very well it is a fake, but none the less I let myself be emotionally affected.  This hidden master is ideology personified.  The space which organizes our desires.

We need the excuse of a fiction to stage what we truly are.

In order to understand today’s world we need cinema. Literally. It’s only in cinema that we get that crucial dimension that we are not ready to confront in our reality. If you are looking for what is in reality more real than reality itself, look into the cinematic fiction. 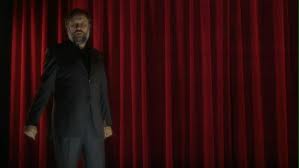 Its difficult for me to be critical of a film like this, because I’m fond of Žižek, and as an avid reader of psychoanalytical texts, I tend to see cinema in the same way. In this film I didn’t agree with aspects of his interpretation of Hanekes The Piano Teacher (I wouldn’t call Erika’s visit to the sex shop passive in any way – plus Žižek cuts his clip off right at the point where Erika’s next action with negate his claim – but Lacanians are bad with female fetish) but to be fair, he is modest in his claims, and sometimes appears quite unsure. This is a charming counter point to his flaunting knowledge that is easy to access, but unpopular.  He knows he appears intelligent for saying things he can’t claim to be his own (this is one of the conceits of a teacher) and he does deal with that within his ego orientation. It’s one of the reasons I like him so much. Another one of the reasons is that he takes the time to make films like this and write books like it.  These little additions, despite his popularity, have done him no service in terms of his reputation and I can’t imagine why he does it, except for a genuine passion for what he stduies and a hope (one I harbour myself) that others can find the same relief psychoanalytical study offers the individual; no doubt himself. For me there is no greater way to look at cinema, and I am very grateful he did it. 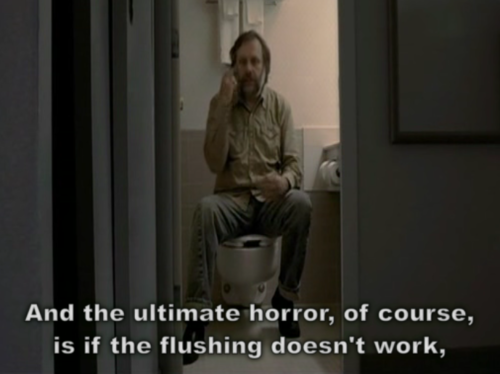 ← A Butcher of Distinction – James Dalton directs Rob Hayes’ question of violence ‘out there’ or ‘in here’. (Theatre Review) Richard the 3rd (or almost) – Timothy Daly brought to life by Markus Weber and the King Street Theatre. (theatre review) →