Home » Film Reviews » The Room and The Roomsical – the worst film ever made moves to theatre. (Film and theatre review)

The Room and The Roomsical – the worst film ever made moves to theatre. (Film and theatre review)

Have you seen The Room?

It has the illustrious title of the worst film ever made, and yes – it is even worse than The Paperboy which is the worst film I have seen so far this year. The Room is considered to be the “Citizen Kane” of bad films, and like many things that you can’t fully comprehend, it is impossible to look away once you get started. It’s not just a train wreck. It’s not just poorly acted.  It is the holy testament to the horrifying truth that not everyone should do everything they passionately believe in. 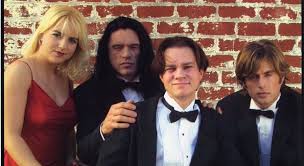 Tuxedos that make an interesting appearance for no reason.

There are mythologies that tout promises claiming what you believe inside is a worthwhile project should be brought to fruition.  They say that if you dream it you can be it. They say that all that is necessary is belief and devotion to the project and then it will be born. Tommy Wiseau’s film is the unflinching reminder that not every dream, not every vision should be realized. Sometimes, what you’re feeling is just narcissism and that is not a good thing. The Room was written, directed, produced and stares Tommy Wiseau – a man fulfilling his dream.

Despite the film’s failure to enjoy immediate success, Wiseau paid to keep the billboard up for over four years, with its bizarre imagery and longevity leading to it becoming a minor tourist attraction. When asked how he managed to afford to keep the billboard up for so long in such a prominent location, Wiseau responded, “Well, we like the location, and we like the billboard. So we feel that people should see The Room. […] we are selling DVDs, which are selling okay.”

However. And this is a pretty big however  The Room is so bad – and I mean so bad – that it has spawned a cult following such that one can almost negate the above mentioned comments of mine. The Room is the kind of film that can’t possibly be deliberately made. It would not be what it is if Wiseau didn’t take himself seriously, and therein lies the rub. He is now in the position where he has almost achieved the fame he desired, and one of the bliss’s of ignorance is the joy of receiving irony as a compliment. His precious film has a cult following just as he intended. And so large is the following  that it has spawned a mini comedy musical in its honor.

Well, you’re so lucky!  Its available in all its glory on You Tube.

It’s really worth watching and if you can spare 90 minutes of your life, all will be revealed. But for those of you who have the time to devote to such trivialities  you should know that many of the critics warnings include statements such as: If you experience brain damage as a result of watching this film I disavow any responsibility;  How much punishment can the audience take and still keep on howling?; Tommy Wiseau’s film oozes sincerity, which is then slathered in a thick coating of oblivious narcissism, and sadly serves as an example that not everyone should follow their bliss.

And it goes on.

If you’re not up on the ‘latest’, you should know that The Room is the hopeful new replacement for The Rocky Horror Picture Show in the midnight screenings where people dress in red frocks and bad wigs to scream “You’re tearin’ me apart” and “Hai” at the screen.  It is time we had some replacements and to date, The Room is one of the only films that gathers such a cult following as to be able to do it. It’s a nice idea, this film interaction thing and one wonders what Deluze would make of so much aggressive film participation from the audience. There is nothing passive about watching The Room, it is one of the few films I have ever seen that is able to lift you out of the spell of cinema and forge a collaborative relationship around its own inability to fulfill its own ambition.

The Flower Shop scene is one of the most famous moments from the film. Theatre crowds will scream out “Hai Doggy” at crucial moments.

Johnny is a really good-looking, incredibly wealthy all round nice guy that cares for friends,  those who are down and out and most of all, for his amazingly attractive fiance Lisa. Johnny cares for a young man in the building named Denny for whom he acts as surrogate father. Johnny provides for Lisa, but while he is working hard all day, Lisa decides she is bored by their life and that she will have an affair. She decides to do this with Johnny’s best friend, Mark. Mark is not sure if the affair is a good idea but as it continues. He is more and more seduced by Lisa into a world he initially had his doubts about.  Throughout the unfolding of this scenario, both are advised by their friends that they must stop the affair because it will crush Johnny.  Lisa throws a surprise birthday party for Johnny but seduces Mark in front of others at the party, humiliating Johnny. Suspicious, Johnny decides to set up a recorder on the phone where he records a conspiratorial conversation between Lisa and Mark.  Driven to the depths of depression and insanity by the betrayal of his best friend and his adored girlfriend, Johnny takes steps in his life that can’t be undone. 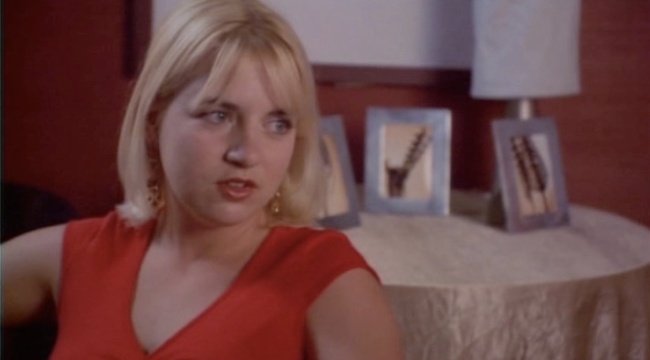 Lisa (Juliette Danielle) was given the role when older women were sacked. Apparently the rest of the cast were horrified when Wiseau insisted on filming their love scenes first, immediately after she had been introduced to the rest of the cast. Greg Sestero was uncomfortable going naked in his love scenes with Danielle and therefore wears jeans through every one of his sex scenes.

So what is so bad about the film?  Its problems are impossible to list, but in a nutshell we have a poorly written script acted by people who seem to have taken their acting lessons from a porn director.  The script repeats lines that meant nothing the first time they were stated, and includes major crises points (such as Lisa’s mother declaring she has breast cancer and Denny being mixed up in drugs) that are abandoned as soon as the scene is over never to be brought up again or resolved. Sex scenes are nothing more than soft porn and involve bizarre anatomical impossibilities, such as Johnny simulating sex into incorrect parts of Lisa’s body like her navel, and usually go for about ten minutes even though they involve repeated footage. Mark turns up inexplicably without a beard and the camera focuses in on the bare chin as if it has deep significance without ever discussing why it’s important. Men toss footballs almost constantly for no reason, at one point while wearing tuxedos they have absolutely no reason to be wearing.  Probably the most entertaining problem of all is the regular appearance of characters that have not been introduced, who have no background story nor real reason for existing who state lines and then disappear from the film never to return  One of the best is a couple who “show up” in Lisa and Johnny’s apartment to have sex (???) and a man who inexplicably shares a deep and meaningful moment between Lisa and her best friend as the friend is trying to talk Lisa out of the affair with Mark.  Denny is a creepy character who turns up to watch Lisa and Johnny have sex, whom they laughingly guide out of the room. Really, it goes on and on and on, but you get the drift.  The problems are delicious and couldn’t have been deliberately planed.

The famous “You’re tearing me apart Lisa” scene that has been parodied by many including The Simpsons.

Which comes to the wonderful musical I was lucky enough to see on Friday night.

“You’re tearing me apartment  the roomsical” includes songs like “Who the fuck are you?” and “I don’t think Lisa’s that beautiful” and even include a rubbish bin moment with a condom and two tissues singing about the perils of carrying sexual waste. It’s a witty ode, more to the faithful audience of The Room and their eternal unanswerable questions than it is to the film itself. I saw the last performance in Sydney last week, but there is talk of it making its way to the States.  If The Room continues to be the dark horse midnight miracle it seems to be, then I guess the musical will make its way over there. I certainly hope so.  It would be great to have an Australian export impact this lovely little not-so-cultural phenomena, and the play deserves every audience member it attracts.

I’ll let you know if there is a chance you can see this wonderful musical in Sydney again.

In the meantime, check out The Room. You will be very sorry, then you won’t, then you will, and eventually, after all, you won’t.

Oh!  And don’t ask me (or anyone else) why it’s called The Room.

To date The Room has given birth to a book, a video game and a musical.

Does this woman really have breast cancer?