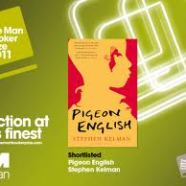 I was extremely lucky to have a chance to ask Stephen Kelman some questions about this wonderful book and also about the remarkable achievement of having a first book short listed for such a prestigious prize. Stephen is a wonderful man, and it was a huge pleasure to have a brief chat with him. 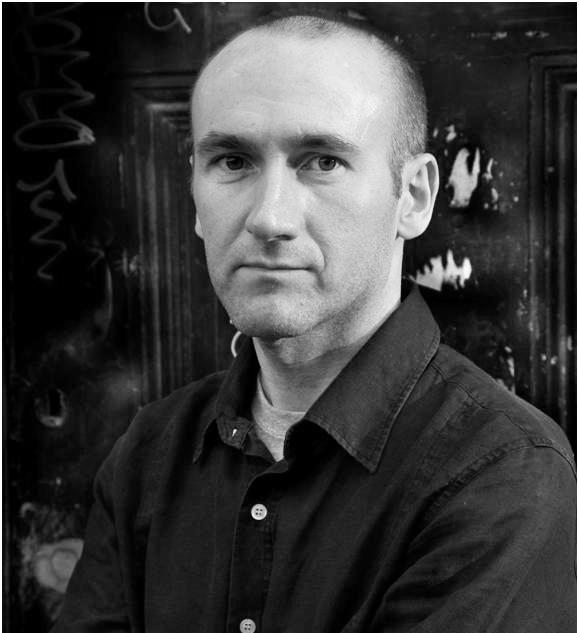 Lisa:  Pigeon English is a book written from a child’s perspective. This narrative technique gives us a wonderful opportunity to get close to the protagonist (Harrison) however, there is an obligation on the reader to be an adult in order to provide an interpretive slant on the events seen from the child’s perspective. This means despite the simplicity of the narrative, the reader must engage deeply, imagine the entire world of Harrison in order to (virtually) re-interpret his stories.  In a way, the reader becomes Harrison’s surrogate parent.  Is this how you see the reader? Did you write in this fashion with the “parent-type” reader in mind?
Stephen:  While I didn’t deliberately write with any particular type of reader in mind, it was clear to me that the reader would likely assume the role of parent: I hoped they would become emotionally entangled in Harri’s innocent view of the world, and that they’d feel protective towards him. He experiences a lot in the novel of which he doesn’t understand, and a lot of the action is implied rather than stated: the adult reader’s knowledge and emotional maturity allows them to fill in the gaps for him. I wanted Pigeon English to be an immersive reading experience while also giving the reader an opportunity to reassess some of their preconceptions about Harri’s world, and their own – Harri’s naïve perspective shines a new light on some pretty fundamental issues and hopefully the reader will end up learning as much from Harri as they have to teach him.

Lisa:  The appeal of Harrison lies largely in his everyman experience. Despite the dramatic differences in our upbringings, I could relate to many of Harrison’s interpretations of his experience. I know this is a local tale about very current day problems, but do you see a universal theme running through Pigeon English?
Stephen:    I think there are a lot of universal themes running through the book. Displacement is one – we live in a world that’s fractured, where we’ve all had the experience of being a newcomer, having to fit in. It’s also a coming-of-age novel that explores the rites of passage that we all have to navigate on our journey into adulthood. But the essential theme of the book is one of good versus evil. Harri is an inherently good person who is landed in a bad environment, and the question I ask of him throughout the book is how he will hang on to his goodness in the face of danger and temptation.
Lisa:  I read that you felt you had “gate-crashed” the Booker short list.  And yet there you were – with your first novel – the dream of every contemporary writer fulfilled. Besides the advantages in terms of sales, did you receive the accolade, inside your heart, as an endorsement of your skill or as pressure to keep up an already stellar performance. Did it add to your confidence as a writer or steal from it?
Stephen:  Obviously it was a great moment for me to be shortlisted for the Man Booker Prize – and totally unexpected. A privilege, and very exciting, a life-changing event. It does feel like a validation, and it means that my next book – which I’m currently working on – will be reviewed and that there will be an audience there waiting for it. But that’s a double-edged thing: that audience might be expecting my second book to be exactly like Pigeon English, and it’s not. The Man Booker nomination brings advantages but also its own set of pressures: I want to repay the faith that people have shown in me and prove that the success of Pigeon English wasn’t a one-off. That both adds to and undermines my confidence as a writer, depending on what kind of day I’ve had! If I’ve had a good writing day then my confidence is high, but the process of writing a novel is, at least for me, very up and down. One thing that remains constant, though, is the feeling of gratitude I have that I’m able to do what I love for a living, and it’s partly because of the Man Booker nomination that I can continue to write more books.

Lisa:  Harrison gives us the impression a person can transcend their circumstances.  However he also shows us that it is the things you don’t know that you don’t know in your environment that will tie you to it and make or break your future. If this is so, then only a complete break with his environment could have saved Harrison from the overwhelming destiny that constantly threatens him. Do you think Harrison could have saved himself?
Stephen:   If there is a message to be gleaned from the book it’s one of self-determination: we can all decide what path we take in life, by the moral choices we make every day. Harri demonstrates that you don’t have to conform to the expectations your environment places on you. He makes a decision to step away from the gangs and to try and impose justice on his little corner of the world. Ultimately he transcends his circumstances because they don’t infect what he holds within his heart: he stays good despite the badness around him. I didn’t have to break away from my environment to achieve my potential – I was still living on my estate when I wrote the book. It’s all about finding a way to rise above the place you’re in, and the tools for this are within you.

Lisa:  Harrison’s pet Pigeon takes on the role of observing “humans” in the same way humans observe pigeons. This perspective gives us the opportunity to see humans as careless creatures, trapped in their moment. And yet Harrison is – if anything – filled with the promise of a bright future. Are human creatures as expendable as pigeons or are pigeons as precious as humans?  Is it Harrison’s connection to his potential that ultimately  makes him so valuable?
Stephen:  I wouldn’t say any creature is expendable, be they person or pigeon! All life is sacred – but unfortunately not everybody thinks this way. To some, another human being can be just a pest, something to be gotten rid of like a pigeon that shits on the balcony. We’re talking about a generation of youngsters who seem to have lost their innate respect for human life, and this is a national tragedy that needs urgently to be addressed. Harri is the embodiment of my belief that we all have the potential to be magnificent – some of us seem to have a greater connection to this potential than others but it should be encouraged in everyone. If my book can play a small part in that – by giving people a glimpse, through Harri, of the magnificence in the mundane reality of his world – then I’ll be very proud.
I told you!
Isn’t he wonderful?
Pigeon English is available for sale here.
Read my review of Pigeon English here.