Home » Film Reviews » Time of the Wolf – Haneke and the start of all things at the end of the World. (Film Review)

Time of the Wolf – Haneke and the start of all things at the end of the World. (Film Review)

Posted by lisathatcher on January 18, 2013 in Film Reviews

If you ever catch yourself wondering how the first full realized (as we know it today) human creatures “decided” to bring religion and politics into their lives, Time of the Wolf is the film for you. A truly underrated Haneke masterpiece, Time of the Wolf is a typically complicated tale of desperation in human beings brought on by a post apocalyptic world.

The film opens with the family of Georges Laurent (Daniel Duval), his wife Anne (Isabelle Huppert), and their children Eva (Anaïs Demoustier) and Ben (Lucas Biscombe), arriving at their country cottage in flight from the city. The Laurents find another family in possession of the cottage, and in the ensuing confrontation Georges is shot and killed.  We never really know why the family have fled the city nor why people are living with such desperation. Haneke wisely offers no explanation. All we know is water is often contaminated and therefore difficult to come by and animals usually have to be slaughtered and then burned. With the death of her husband in the very early minutes of the film and right at the start of their journey, Anne finds herself alone in a world where its every man for himself having to protect her two children.

Anne and the children start to wander, always in the dark.  Haneke uses no tricks here – he really did his filming in the dark with only lighters and lit brushwood to light the “world” as the script dictates. It makes for a terribly bleak vision and, typical of Haneke, increases a sense of anxiety and distress in the viewer.  I started to watch this film in the afternoon, but had to turn it off and go back in the evening because I couldn’t see anything with the light of day behind it. At this point the film is shot through Anne’s point of view, and we have a sense always, of impending doom.

Soon, however, the film changes is position. Anne and her children come across a train station with some other people in there, in a “waiting for Godot” style of situation. They are hoping for a train which may or may not arrive. Initially, the group that Anne and her children connect themselves with is a rather brutal one that will only offer help or assistance in exchange for something, which includes sexual favors from the women. Clearly this is a Haneke critique of Capitalism.  We watch the wealthy able to barter the most for clean water and food and then dominate and control the rest of the group with their possessions. 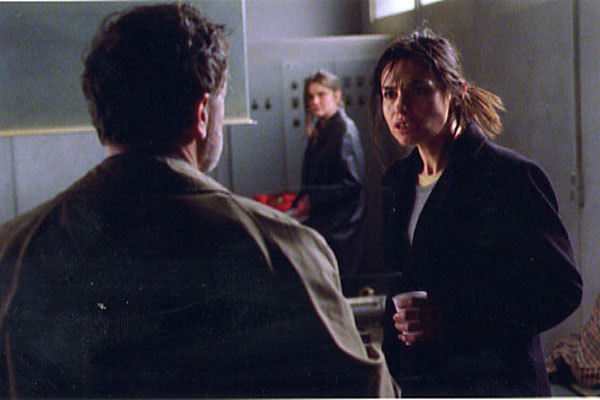 At this point the narrative transfers. Eva sits down and writes a letter to her dead father, noting her mothers pent us tress and terror. The letter itself is a symbol of the turning point for the future of humanity, as is the new point of View being that of a hopeful child. The letter is a moment the humans have decided to write about their fate – a symbol or art and engaging with life. The transfer to the point of view of the child is an acceptance of the world as it is and a hope for the future. Eva places her hope in a young boy who has been accompanying them on the journey, but who keeps to himself as a loner. Eva will apply a morality to the boy she hopes he will take up on behalf of her hope, but he refuses, letting Eva down, but not entirely.

Now a new group arrives at the train station.  This is a large, well managed group with animals and clean water and food. No one is the leader, they are just “organized” and “everyone rules”. Here we have a socialist based democracy.  Around the edges of this organizing exist the seeds of the old capitalism, racism, fascism and communism, all held in place by a variety of characters who always threaten to upturn the hope of organization of the group. Through all of this, there are rumors of a group of angelic like creatures called “the Just” who have been sent from a “higher place” to watch over them. They are often recognizable by the ultimate sacrifice they will perform, throwing themselves on a fire in order to rid the group of one more mouth to feed. These people become immortalized through a mythology coated in spiritual symbolism.

All of this exists, of course, in the context of complete hopelessness and waiting for the train to arrive – for what reason none of them are very sure.

Morality repeatedly surfaces and within the context of the film is never understood and the collective never work out the best ways to uphold moral principles. For example the man and woman who killed Anne’s husband will turn up wanting to join the collective. When Anne can’t come up with better proof than the witness or her and her children that these people are murderers, the group decide upon innocent until proven guilty and Anne and her children are forced to share their resources with the people who murdered their husband and father and stole their food, car and shelter. The viewer knows this is completely unjust, because we know the man did perform the atrocities he and his wife are accused of, however we are forced to allow them to co-exist also, because we, like Anne, Eva and Ben have no proof of their crime.

The climax of the film, when Ben, moved so deeply by the stories of ‘The Just” decides he wants to be one is very powerful and despite its incredibly sad and desperate truths it offers a perverse ray of hope that the human creature is capable of great selflessness and enormous courage and strength. It’s a beautiful scene – I won’t speak too much of it here, but it does make us believe Haneke thinks we are going to be ok.

At least, he thinks we’re going to be ok after a great deal of suffering and heartache.

Although this is considered to be one of Hanekes minor works, I think it packs all the punches of his other films. Like everything Haneke does, it is deeply complicated and far more than what it occurs as on the surface. It’s a  film I could watch again and again.

But maybe not for a little while.