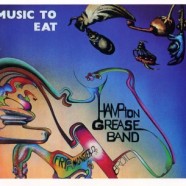 Posted by lisathatcher on January 15, 2013 in Music Reviews | 1 Comment

Music to Eat is the only ever band produced by the great avant rock band, Hampton Grease Band.  Released in 1971, this double album is said to the the second lowest selling album in Columbia’s history, only outdone for lowest place by a Maharishi Mahesh Yogi yoga instructional record.  Shocking I know, but the band didn’t really last after the monumental failure of this album. What’s most crushing of all, is that the album should never have failed, and in the most important ways never did.

They began in the 1960’s as a blues rock combo getting gigs with the likes of the Grateful dead. They were famous for doing nutso things like standing on a pizza for the performance and covering friends in whipped cream on stage.  This nonsensical wizardry drew them the attention of Columbia which is how they got their first (and last) signing.

with such an illustrious history there is no surprise it has garnered something of a cult following over the years, enough to warrant a re-release in 1996 and a concert in 2006. It must be said, antics aside, the main reason they have such a cult following is the brilliance of the band.  they used to call their music ‘SUCK ROCK’  which may have heralded their demise, but certainly not the quality of the sound. Bruce Hampton – vocals, trumpet, Harold Kelling – guitar, vocals, Glenn Philips – guitar, saxophone, Jerry Fields – drums, vocals and Mike Holbrook – bass. The music was / is the quality of Captain Beefheart and Frank Zappa, two names they would always find themselves paired with.

Their suck rock begins with some jazzy guitar freakouts and hippy-hopeful glances back over the shoulder. They’re nodding toward Zappa and Beefheart with a touch of an addressing of the Allman brothers. They keep the guitar neat and tidy and well-loved – the opening track Halifax is just great for its searing melody and personal touch. With all this is a look over the shoulder at what went before and what is around. However, the brilliance of this flash of lightning is its nod toward the future. Somehow, they’ve managed to pre-empt Television, Sonic Youth, Swans and Band of Susans.  The best thing is, that “distortion” you hear aint – it’s just the boys strumming really really fast.  My favorite track is Evans – but really I dig the whole package.

You can’t discuss this album without addressing the whack-job lyrics and screeching tones of Bruce Hampton. His voice is ok… nothing wrong there.  It’s the utter insanity of the lyrics that move beyond that place that you can “yeah-man” your way through it and even the most die-hard fan can’t come up with the saving grace any longer. They had to have been part of what alienated the band at the time, but the dire truth is the lyrics fit right in and the whole shomozzle works really well. It takes the album from being “huh?” to “genius!”

There’s a couple of great reviews around.  Check out Mutant sounds take on this album and also Dog 3000 does a great review on Unsung. Either way, see if you can grab a copy. It hit the Nurse With Wound list which is how I got my hands on it, but you’ll find it has a bit of a revamp and is available all over. Hint hint that Mutant sounds link I added might help you out a little with nabbing a copy too.