Posted by lisathatcher on January 14, 2013 in Music Reviews

KaiL Baxley grew up in the small backwater town of Williston, South Carolina, the birthplace and stomping grounds of the late great soul legend James Brown, with whom Kail shared an unlikely friendship as a child. “Yeah, James used to say, ‘Boy you bein’ good?’ I’d say, ‘Yes sir.’ He’d say, ‘You know you doin’ wrong! Nah, show me your moves lil’ man!’ And we’d have a little dance off. I’m pretty sure he always won, ha, ha. There’s something about the groove of James Brown that has always stayed with me.” 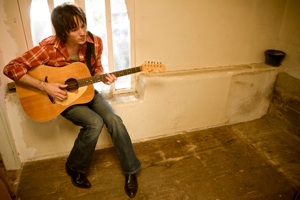 After years of singing for his supper across the South, Europe and parts of Africa, KaiL found himself in California with hopes of composing music for film scores. A chance meeting with engineer/producer Eric Corne convinced him to write a record of his own. Within a few months, the two were in the late Elliott Smith’s New Monkey Studio with some of LA’s finest musicians. The result is his debut effort, a double EP drawing heavily on both the literary and musical influences of his Irish/Southern roots.

I’m Not usually one to review on the first album – even if it is a double, but  confess to being very taken by the single ‘Say Goodbye to the Night’ which is not my kind of song at all, but something about this beautiful little tune stuck with me. Check it out:

It was based on my attraction to this song that I got into the double LP.

It’s a sturdy start – he’s definitely a talented songwriter and he has a great voice. He’s got a bit of a ‘perfect-preppy’ thing going that is not in the voice, which gives me the feeling our Mr Baxley will be around and about for a while. We have that voice and that talent to hold us over while wait for the image to catch up.

The LP is a double, so its spliced into two albums.  The first album, Heatstroke is backing band filled and the second, The Wind and the War is a little more acoustic. I do think the standout on the album is ‘Say Goodbye to the night’, but a few others songs bear an honorable mention. The opener on Heatstroke ‘Don’t matter to me’ with its strong harmonica riffs is a nice little piece of blues action. ‘Legend of the Western Hill’s is a very beautiful song that reminded me a little of a Nick Cave tune, proving Baxley might be best as a ballad man. This is reinforced by ‘The Rebel’, another lovely song. Most of these songs are on The Wind and the War when it’s just Baxley and his guitar. With maybe a little lilting strings thrown in for good measure.  The second LP is lilting and lovely and I found myself playing it a little more than the first. But that’s not to say I didn’t enjoy that also. Then, just when you think you have the man all figured out there is a lovely little deconstructed interlude with a stirring female chorus of sorts – nothing like the rest of the album.  It seems he’s not afraid to play around with sound which bodes well for future albums.

You can Pre order Kail Baxley’s Heatstroke / The Wind and the War right here.  My advice is to get in early with this one – you will be able to brag at dinner parties in the future.