Posted by lisathatcher on January 2, 2013 in Film Reviews | 1 Comment

“I think the substance of what I’m trying to say is really said in a nonverbal form.  It’s a kind of spiritual quest.  You could say we were all privileged invited guests to this mudball spinning in space.  Life is the host. Life invited everyone here, and it didn’t ask anyone to approve the guest list. And I would love to get that point of view across somehow.” Ron Fricke

One of the most interesting aspects of the film Samsara is the question of montage and its ability to reach past the intellect and into a more indefinable component of the psyche. Usually a montage is used to show the passing of time when real time to do so is not available.  However in the case of Samsara, it is used to unify humanity through a series of carefully edited shots of people, places and things from around the world. This unity, according to an interview I read with Ron Fricke (director cinematographer) and Mark Magidson (Producer, co-editor, co-writer) is a hope of sorts the two have that this moment can have a human witness move out of their own life and see themselves as connected with a larger expanse – a universal of sorts.

Samsara is a film made up entirely of images taken from twenty-five countries around the world. It took five years to make and was filmed on a 70mm camera system that seems old compared with the digital that is available today, but vastly superior to the digital that was around five years ago (according to Fricke). When you consider how important image is in this film (it is all about the power of image) every shot had to be filled with a beauty that inspires transcendence. Remember we are dealing with audiences for whom the greatest of all crimes is to be bored and who see images from all over the world on You Tube every single day. Samsara had to be worth the time and the effort.  It also had to be eternal – or at least touch on eternity.

The first thing to say about Samsara is that it is incredibly beautiful and worth trading your cash for. In fact, see a film like this on an enormous screen if you can – don’t wait for DVD. You won’t be bored, and you won’t regret the decision to attend. Except for the rather clichéd soundtrack, it is gripping and thrilling to witness. It is a wonderful opportunity to have that experience cinema so powerfully evokes, where you can suspend your conscious thinking and still find yourself engaged with deep questioning and awareness.

Which brings me to, what I consider to be the most interesting question Samsara invites. The film is a great example to immerse yourself in the question of montage.  Sergei Eisenstein,  in “A Dialectic Approach to Film Form” noted that montage is “the nerve of cinema”, and that “to determine the nature of montage is to solve the specific problem of cinema”. The problem he is talking about is an explanation for why a series of images can have such a profound effect on a viewer. Eisenstein eventually came up with: “montage is an idea that arises from the collision of independent thoughts” wherein “each sequential element is perceived not next to the other, but on top of the other.”

Which brings me to the central question of Samsara.  Ron Fricke has made the claim that he does not intend to preach a point of view in Samsara, and in fact that has a lot to do with why he prefers the non verbal form. And yet, the film took one and a half years to edit.  My question is, isn’t his editing a commentary on the image? You may cry an immediate yes, but Fricke, who had immersion in the cultures and circumstances that give birth to these images says no.

“I think that when you’re editing the film, it begins to emerge from all the images have that you’ve collected. You go with the flow of the image. You don’t try to put them together in a certain way, but it’s not easy to do.  When you’re in there editing with only images, they need to say something when you connect them and sometimes they begin to say things that you don’t want them to. You just want them to appear, give up their essence, and move on to the next one. You get the meaning out of the feeling you get from it – that’s the meditative part.”

There is a series of shots in the film that involve guns. There is a stunning series of images of a Ghanaen family burying one of their own in a coffin that is perfectly shaped like a gun (I am lucky enough to have been to Ghana and their coffins made to look like something are really incredible). Later in the film a Caucasian family stare into the camera sporting their gun’s – the young girl in her early teens has a pink one.  Pink for girls.  This crosses immediately to a Nambian man in full tribal garb holding their guns. I found sequences like this to be manipulative.  The directors voice felt like it was screaming at me: we all carry guns; don’t judge about guns; look at all the people who feel they need guns.  To hold a gun and stare powerfully into the camera is an enormous statement. To ask someone else to do that, is an even larger one. 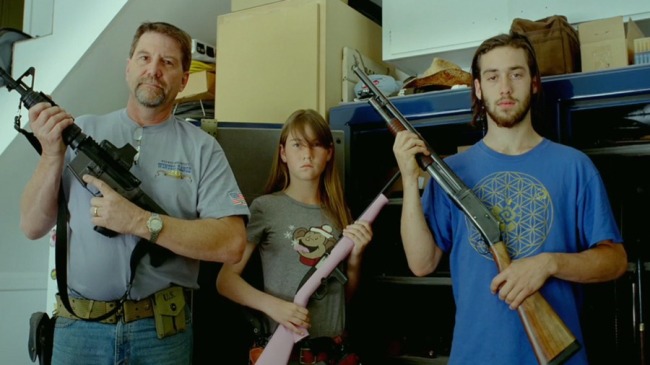 Another series of shots involve the processing of animals in preparation for food consumption by human beings. Roger Ebert writes elloquently here about his response to these powerful series of images. They are strong enough to push me into vegetarianism again- a staw on the camels back you might say. These images are powerful, but again Fricke maintains is dispassionate eye – or claims to. After watching that, I’d be willing to bet real money Rob Fricke is a vegetarian.  It seems that by working very hard at trying to sit on the fence, Fricke’s opinions and ideas have come through despite himself.

Another problem with the montage effect is that in the absence of commentary, I bring my own. This is a film that is obviously made for a western cinema audience. This “perspective” can give the film a bit of a touristy feel. We dabble in the colourful bits, the shocking, the eye catching, but what is possibly behind that?

Fricke is obviously aware of this and there are some shots that provide depth – the central shot of the sand sculpture art work and what becomes of this are a case in point. The power in these shots lies not just in creation but in the transitory nature of creation and effort. I found moments like that in the film, moments that move beyond our westernised cultures ability to make sense of, were able to achieve what Fricke says he is going for. These were the moments I felt I could see something I know nothing about and be filled with a feeling, rather than apply my own jaded circulatory opinion on what I think an image means.

← aso – Ami Yoshida and Christof Kurzmann mirror the mirrors mirror. (music review) Why I still love Queen, even after my discovery of good music. →