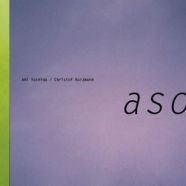 Posted by lisathatcher on January 1, 2013 in Music Reviews

Although I have never reviewed her on this blog before, I happen to be deeply fond of the music of Ami Yoshida. aso is one of the reasons for this fondness. I’ve had the disc here for a while now… almost a year…  and I confess to digging it out regularly. However writing about this music, or what draws me to it is something I have put off for quite a while.

In a manner of broad interpretation, aso gravitates towards the Wittgensteinian extreme of its assertion. What I mean by this, is if you think of the experiment laid out in Tractatus Logico-Philosophicus, a text would reproduce its own logically constituted world, which would be managed by logical propositions. Wittgenstein’s philosophical project is to treat the elements of discourse as part of the construction and to relate to them and between them as part of a logical world. I kept thinking about this as I listened to aso, given the assumed logical discourse appropriated by Yoshidas voice and the assumed logical discourse of the score and the assumed logical discourse of Kurzmann’s clarinet. Each logical formulation pushes itself toward the concreteness and rigour proposed by the other elements. Possibilities become explorable through juxtaposition and interrelation.

Of course Wittgenstein was exploring the possibilities of language and as for pressing in against different logics – well all experimental music does that doesn’t it?

What for me was so resonating with Wittgenstein in this particular disc was the use of wind and voice.  The way the two bounced against each other didn’t sound, but felt more like a conversation – almost like a duet if I were to allow a clumsy term. But it isn’t a duet, it’s more like sound poetry, precisely because of its adherence to certain sort of logical propositions that will define each individual sound. Wittgenstein explored the claims and possibilities of language in general and reduced his findings to a minimalist style in constructing the world as a constellation of logical propositions. Yoshida’s voice and Kurzmann’s clarinet follow their own logical propositions in a way that had me think of the components of their contribution rather than the universal quality of the sound produced. Each appears with, around and against the other as a series of logical approaches within the lyrical stirrings of the soul.  This is particularly interesting given each musician doesn’t speak the others language and the project took two years to achieve.

Goodness I haven’t begun to get to what I’m trying to say here – either my Yoshida / Kurzmann isn’t good enough, my Wittgenstein isn’t good enough or it’s a little from column A and a little from column B. I’m determined to not let go of this however. Where Hankils typewriter sounds completely like Samuel Beckett to me, aso sounds completely like Wittgenstein – even if I can’t prove it.

← The Human War – Noah Cicero and the distance of war over there. (book review) Samsara – Ron Fricke and Mark Magidson guide your meditation. (film review) →