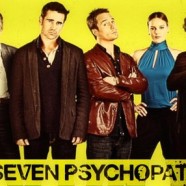 Posted by lisathatcher on November 13, 2012 in Film Reviews

Seven Psychopaths is one of those really cute and really clever takes on the Hollywood screenplay.  I have to say up front that Martin McDonagh (who writes this as well as directs it) is giving Tarentino the elbow here in a film that is sort of homage sort of pay-out, sort of frustrated attempt to say; “thanks Tarentino – what is left for us to say?” sort of way.

This is one of those Meta films… where you find out half way through you’re in the film they’re talking about writing. I happen to really like those sorts of films and although there have been a lot, I don’t think the genre is by any means saturated. This is well-directed, has lots of neat plot twists that all come together nicely, great dialogue and fantastic acting from everyone concerned. There is the obligatory cameos from great stars we love to watch and the punching wit that, since Tarentino (actually since Godard in the 1960’s – but don’t get me started on that rant) has become an essential aspect of the “gangster” film.  Gone are the days of The Godfather, Goodfellas and Casino. We want our opaque violence with a side order of hysterics, thank you very much. 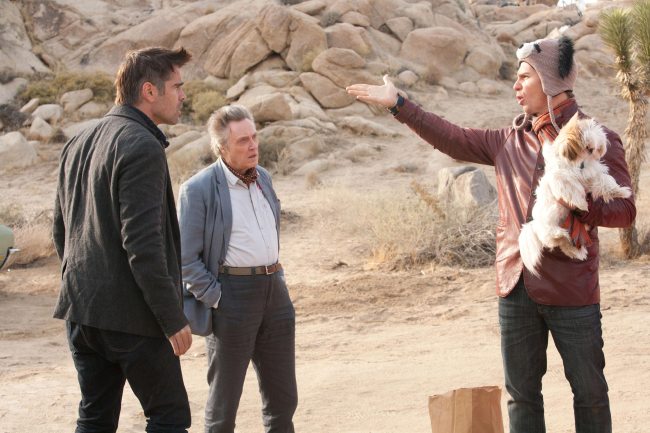 This is a clever film (have I said that already?) that argues strongly there is too much violence in film, while saturating the screen with bloodshed. It states female characters are under-represented and poorly written, while underutilising the brilliant Abby Cornish and having a virtually naked prostitute for no reason. It states that villains are badly written and need to be stronger more fleshed out characters, while giving us a villain that is so much a caricature of a villain that he almost doesn’t exist (Woody Harrelson’s character is one of the really strong points of the film.  So cleverly written and so well acted the character virtually doesn’t exist.) It is a film that argues against, and at the same time for, the famous Godard quote: “All you need for a movie is a gun and a girl.” (Journal entry May 16 1991. 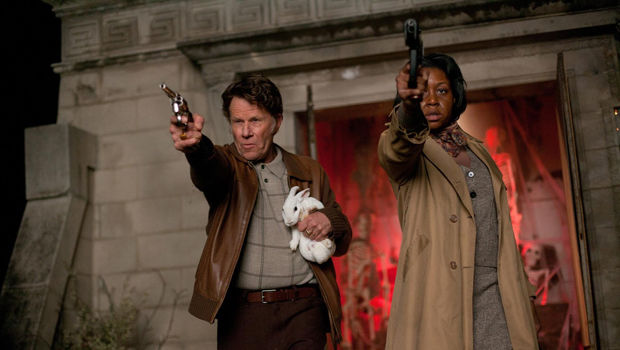 However, between Godard and Tarentino, with a splash of Scorsese and Melville in between, there isn’t much more to say about the gangster film, is there? There is a wonderful moment when the much harried Marty (Colin Farrell as the maybe-maybe-not-alcoholic screenwriter) declares he wants to write about psychopaths who find their way, who have a change of heart, and his friend Billy (brilliantly played by Sam is-there-anything-he-can’t-do Rockwell) cries out “What?  Are we making French films now?” This comment received a hearty applause from the packed cinema I was in – just to show how much the screenwriter really does have to contend with.  I said this myself in the review I wrote recently for Killing Them Softly. Killing Them Softly is the sort of film Seven Psychopaths is commenting on. Marty wants something fresh.  Billy wants more of the same. Mc Donagh reveals to them and to us, there isn’t much room for either.

As a standalone film with its political subtext aside, this is a well made fun romp.  It’s witty – really witty – and the acting is fantastic. Everyone is great, but stand outs are Christopher Walken as the creepy guy turned nice guy, Sam Rockwell as a psychopath and Woody Harrelson as the perfect villain caricature  with no soul or substance. There are all sorts of brilliant add on’s.  Tom Waits is an especially fantastic moment as another of the psychopaths – delicately patting a rabbit in a play on Ernst Blofeld in one of the many film references throughout Seven Psychopaths – and Harry Dean Stanton as the Quaker stalker in a role that pits him in a cross between an Exorcist type priest and a Melville pool-of-street-lamp-light villain.

It’s a film worth trading your hard-earned cash for in the end.  Here’s a nice little quote to get your giggle on:

Hans: An eye for an eye leaves the whole world blind.

Billy: No, It doesn’t.  There’ll be one guy left with one eye.  How’s the last blind guy gonna take out the eye of the last guy left?

← Great Expectations (theatre review) – Bakehouse lives up to the perils of ambition Omni – Hideki, Akiyama and Nakamura move away from the conventional aspects of time. (music review) →
Loading Comments...
Comment
×