Omni – Hideki, Akiyama and Nakamura move away from the conventional aspects of time. (music review)

Posted by lisathatcher on November 13, 2012 in Music Reviews

Omni is a Latin prefix meaning “all” or “every.”

Reading Richard Pinells review of this disc from The Watchful Ear, I discovered the following:

Nakamura and Akiyama were at one point virtually inseparable, playing together all the time when they first appeared on the improvised music scene. In recent years however their music seemed to have moved in different directions, as Nakamura’s no-input mixer sound became louder and more abrasive, so Akiyama moved off into a heavily blues influenced guitar style. Kato Hideki however, after playing in Otomo Yoshide’s Ground Zero groups in the late nineties has since moved to New York, where he plays bass in and around the contemporary downtown improv scenes.

For the avid listener, bent on expanding their listening abilities and aesthetics, Omni provides a delightful challenge. True to the spirit of omni’s definition of “all” these are seemingly random sounds flung in an intense, almost aggressive way into a melting pot of noise. Where many improv exercises result in a “salad bowl” (your lettuce remains lettuce, your tomato a tomato and your radish a radish) this is a “melting pot” – each sound melds and rolls and forms with the other sounds so that it is almost impossible to make the individual artists or instruments out as separate. What is intriguing is the prime number tuning on the bass. At first I was amazed by the sound of what seemed to be a drum – and then I looked up the wiki on prime number tuning to find this:

I’ve tried to do a little research into the above formula to see if this is what is happening to the bass in Omni, or if I have missed the point entirely. I haven’t come up with any concrete answers yet, but I’m still looking. What I can see (through the listening) is a bass sound that provides an odd undercurrent of underivative sonance that holds the other noises together in a sort of integrity of sound. It is this sound, even though it is intermittent  that is the source of the incorruptability (the wholeness or the “all”) of the piece. And it is within this sound that the order in the chaos is found. Toward the end of the first track, the sounds organise themselves into something recognising melody, before they move back into the chaotic “all” that will source from the bass. The bass is always present through its organisational sound as well as its organisational silence.  I may be way off base (pardon the very loose pun) here, but I am finding the explorations fascinating. 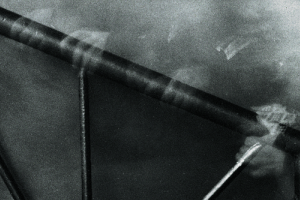 Omni is a set of questions and answers that do not necessarily relate to one another.  It is its own rallying point, a negation of what Roland Barthes called “the semiological definition of myth in a bourgeois society: myth is depoliticised speech.” (Roland Barthes – “Myth Today” 1957) In treating music as “all”, that is everything there is within in each artist, each instrument  and each sound, the trio come out with a sound chatter that cuts into the myth chatter of conventional sound and its limiting structures. Where myth in the Barthes sense purifies sound such that the remnants appear as innocent and child like, Omni makes a demand for the “all” of sound.  If I make a statement about a sound scrubbed of it’s “all” by certain limitations, without the “all” of the chatter, I make a statement that is taken as a statement of fact – it contains no questions.  This is the power of a disc like Omni. It is in the “all” that the purification of the myth negates, that I find the deeper conversation of sound, including the questions. Because of this, Omni must not follow the purity of conventional sound. It must be a flux of everything that is usually left outside of the myth, bound by an internal structure that it has sourced within its own tuning / timing. The way the artists describe this on the Presqu’île Records site is to claim a movement away from the linear aspects of time that dominate conventional sound.  Theirs is a dialogue that encompasses the fullness of time.

Omni is available still On the Presqu’île Records website here. 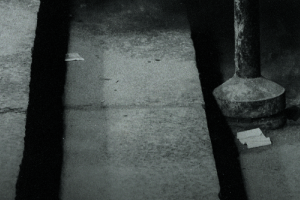 ← Seven Psychopaths Review – Martin McDonagh goes cute n’ clever on the art of the screenplay. Try I Bark – Patrick Farmer and the delicate brush against the surface of all things.(Book Review) →
Loading Comments...