Home » Music Reviews » Your Breath on my Lips – Jim Denley and the intimacies of the natural.

Your Breath on my Lips – Jim Denley and the intimacies of the natural.

Posted by lisathatcher on November 12, 2012 in Music Reviews

One of the most exciting things about watching Jim Denley live is that he practises “circular breathing”.  That’s something we’re familiar with in Australia because our Aborigines use it when playing the didgeridoo. For those of you who are not so familiar, here’s the wiki:

Circular breathing is a technique used by players of some wind instruments to produce a continuous tone without interruption. This is accomplished by breathing in through the nose while simultaneously pushing air out through the mouth using air stored in the cheeks.It is used extensively in playing the Australian didgeridoo, the Sardinian launeddas and Egyptian arghul, as well as many traditional oboes and flutes of Asia and the Middle East. A few jazz and classical wind and brass players also utilize some form of circular breathing. 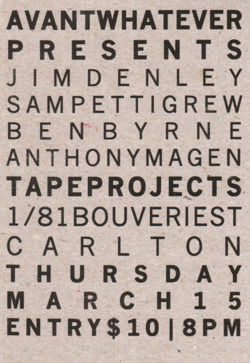 So the circular breathing produces a continuous sound.  Denley achieves this sound with a balloon over the mouthpiece of his sax.  I saw him live earlier this year at an Avantwhatever launch, and it was a really interesting watch. Your Breath on my Lips is a combination of recordings made previously that Denley decides to place together.  The title is a mash-up of lines from a truly brilliant poem by Amanda Stewart that can be read here.The first recording is balloonsax made as an installation for ‘Visionarium’ in 2011. The second recording, interestingly, is the sound of 100 snails made for an installation called ‘Ecstatic Voices’. The two installations have been “mixed” to form the recording on the disc.

So the first question  is what does 100 snails sound like?  I know how ridiculous this statement appears, but they sound sort of like what you would expect: like slimy suction pops of release and gluey liquid mini bubble explosions. If you think of the froth that a snail leaves in its wake, it makes sense that magnified it sounds like small pops of air bubbles. What makes these two ideas work so interestingly (and why I can see the sounds being placed together) is the balloon sax combined with the snails own tiny balloon pops. The balloon placed over the mouthpiece of the sax doesn’t pop, but it does regulate and distort the sound. This balloon has a dry sound when laid against the bubbly pops of the snail. Denley’s regular intake of breath against the perpetual rotational sound of the sax seem geometrically aligned with the circular sound of the pops of the snails. Wonderful!

As for the place this disc takes in the evolving conversation around sound art, perhaps a hint can be taken from the Amanda Stewart poem itself. One of her words in the poem Absence is “symbioticpresymbol” which seems perfectly placed in the Jim Denley recording of himself and 100 snails. This is not the sound of a man playing his instrument in the wilds of the field surrounded by 100 snails. The symbiosis, the connection here is through sound and sound as symbol – presymbol even of a certain kind of artistic unity in all living things. Each sound works within an internal system of all-embracing limpidity but at the same time nurture a discrepancy that cannot be assimilated. This outbreak of sound that comes from asymmetrical sources is both a redemption and a threat. This combination holds the promise of symmetry while we understand this stability to be a thing retrospectively imposed upon each work. The unification here is tenuous. In short, it can only possibly exist in the sound, but it exists solidly and completely within the sound.

This disc is a unique and fascinating listening experience.

Grab your copy from Avantwhatever here.

← “The Master” review – Paul Thomas Anderson and the Death-Drive Great Expectations (theatre review) – Bakehouse lives up to the perils of ambition →
Loading Comments...