Home » Film Reviews » Looper – A mothers love will save us all.

Looper – A mothers love will save us all.

Posted by lisathatcher on October 14, 2012 in Film Reviews 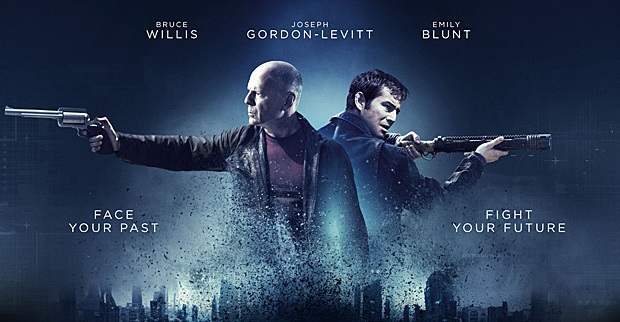 Time travel has not yet been invented but 30 years from now, it will have been. I am one of many specialized assassins in our present called loopers. So when criminal organizations in the future need gone, they zap them back to me and I eliminate the target from the future. Loopers are well paid. We live the good life and the only rule is never let your target escape, even if your target is you.

Stephen Hawking tells us there is definitive proof that time travel will never exist – and that is,  no one has come back to tell us it does. The latest film to play with time travel tries to take this into consideration by telling us they are coming back, they’re just not telling YOU. (or rather Stephen Hawking) However, despite Stephen H’s excellent point, I can’t help being a total push-over for sci-fi time travel films, and even the occasional pure sci-fi flick.

While I said yesterday that I think the tough-talking-dark-comedy-gangster film is a genre that has really been bled to death, I do not think that is the case for the time travel sci fi type flick.  I’m up for tons more of these – and lets get brave!  Lets take on the concept of time travel?  Looper is a(nother) film that shies away from the physics… kind of like The Terminator did and Back to the Future did, but I can see a nice hefty well-spring here that is virtually untapped. Speaking of The Terminator, there are more than a few concept nods to that great film in Looper – something I enjoyed and had a lot of time for. 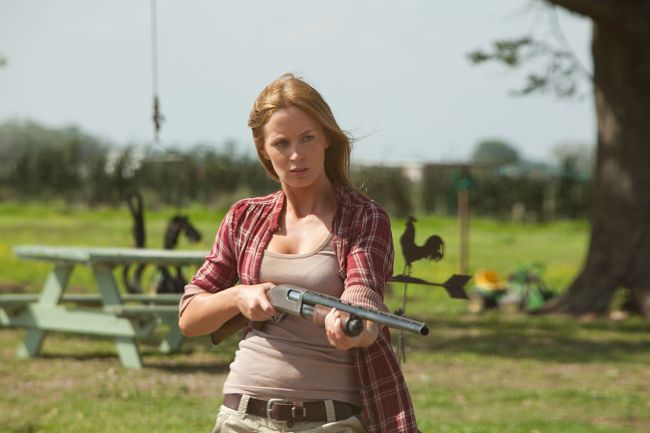 Looper is a pretty cool film right up until the last five minutes. It does something that is difficult in complex plots, and that is holds tightly to all the threads and ties them up nicely. Despite the difficulty of plot lines, you never lose track for a second.  This gives the actors lots of room within the script to play their part really well with lots of breathing room. Everything seems to be working  and then it dips into the some of the worst Hollywood schmultz ever – and its a shame because it is a film that keeps you guessing and the plot twists, while not total brain teasers, are enough to keep you entertained. In many ways this film has more to do with We Need To talk about Kevin  by the time it gets to the end, than it does with any of the previous time travel genre films. Without any major plot spoilers, I’ll just say love conquers all and we’ll leave it at that. 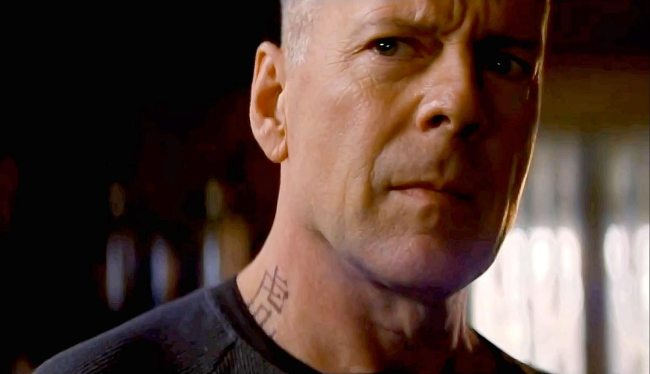 While I was strolling around looking at other reviews I also saw that much has been made of Joseph Gordon-Levitt’s make-up to make him look more like Bruce Willis  Its a pretty good call, the make-up is very distracting and downright odd at times. However  I did have a moment of forgiveness, when I started to see how much Gordon-Levitt looks like a young Bruce Willis, because – lets face it – he does not look like a young Bruce Willis. I think it might be the acting more than the make-up that convinces me in the end, but dark eye-brows not withstanding, it wasn’t a huge problem for me. All I can say is thank god they didn’t try to make Bruce Willis look like an older Joseph Gordon-Levitt.  They made the right moves there.

Everyone is in fine form. Joseph Gordon-Levitt gives a great performance, and Bruce Willis is clearly loving being a tough guy and the centre of attention again. I have to fess up and admit it was great to see him back behind a gun and having a great time.  Emily Blunt is starting to look like one of those who never does anything wrong and Pierce Gagnon is really amazing as the boy behind it all.

I don’t have a huge amount to say about Looper. Blade Runner it aint – but it was a lot of fun and is a cut above the mundane pop cinema experience… even if the ending is a bit crap.