The Unlikely Pilgrimage of Harold Fry – Rachel Joyce and the lightness of tragedy. (Booker Long List)

Posted by lisathatcher on October 1, 2012 in Book Reviews

It must be the same all over England. People were buying milk, or filling their cars with petrol, or even posting letters. And what no one else knew was the appalling weight of the thing they were carrying inside.  The superhuman effort it took sometimes to be normal, and a part of things that appeared both easy and everyday.  The loneliness of that.

Hirokazu Kore-Eda’s acclaimed 1998 film entitled After Life sees six souls faced with one of the most difficult questions of the human condition – could you distil your life into a single instant? Just one moment to take with you into eternity?

He saw that when a person becomes estranged from the things they know, and is a passer-by, strange things take on a new significance. And knowing this, it seemed important to allow himself to be true to the instincts that made him Harold, as opposed to anyone else.

When we are first introduced to Harold Fry we see him as a weak and insipid man – a man who thanks the talking clock, as he says himself in the pages of The Unlikely Pilgrimage of Harold Fry. And yet despite his mousiness Harold seems to have a remarkable ability to grasp at a moment and allow it to transform him or others. He did this a long time ago to Queenie Henessey and she was unable to forget his small kindness. The book asks the very interesting question of why something, no matter how small, will affect us one way and make the most profound difference in our lives. Contrary to this, the book also examines how the smallest decision can turn into the largest action, particularly when we didn’t properly understand the complexities of what we were committing to.

The opening quote in the book is from Bunyan’s Pilgrims Progress and the novel can be construed loosely as that, even though Harold is a confirmed Atheist – or rather a casual non-believer. The power of the book is in Joyce’s ability to give us the most intense emotions in the most gently beautiful writing. The novel is filled with profound moments that give some substance to the almost cartoon like characters that Harold meets along the way. One stand out moment, Harold meets an older gentleman who confesses to enjoying acts of humiliation in a queer relationship, is written with so much beauty and humanity that’s it is almost a shame Joyce didn’t write the novel about him. The neighbour living next door to Harold is another beautifully painted portrait. It is these moments that are the power behind the novel.

There were times, he saw, when not knowing was the biggest truth, and you had to stay with that.

The synopsis on the Random House website says this:

Meet Harold Fry, recently retired. He lives in a small English village with his wife, Maureen, who seems irritated by almost everything he does, even down to how he butters his toast. Little differentiates one day from the next. Then one morning the mail arrives, and within the stack of quotidian minutiae is a letter addressed to Harold in a shaky scrawl from a woman he hasn’t seen or heard from in twenty years. Queenie Hennessy is in hospice and is writing to say goodbye.

Harold pens a quick reply and, leaving Maureen to her chores, heads to the corner mailbox. But then, as happens in the very best works of fiction, Harold has a chance encounter, one that convinces him that he absolutely must deliver his message to Queenie in person. Harold Fry is determined to walk six hundred miles from Kingsbridge to the hospice in Berwick-upon-Tweed because, he believes, as long as he walks, Queenie Hennessey will live.

Still in his yachting shoes and light coat, Harold embarks on his urgent quest across the countryside. Along the way he meets one fascinating character after another, each of whom unlocks his long-dormant spirit and sense of promise. Memories of his first dance with Maureen, his wedding day, his joy in fatherhood, come rushing back to him—allowing him to also reconcile the losses and the regrets. As for Maureen, she finds herself missing Harold for the first time in years.

And then there is the unfinished business with Queenie Hennessy. 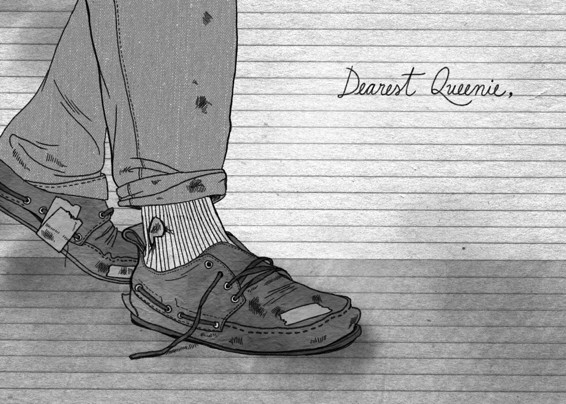 The Unlikely Pilgrimage of Harold Fry is a book about a journey but it is also a book about life’s journey and the twists and turns that come its way. Harold Fry has been married, worked and had a child and except for one other very significant event, nothing else much has happened to him. It it when he decides to take a journey  (move his body) that he and we begin to see his life as something other than what it was. In a way Harold will examine his life and the reader will reinterpret it for him. The book evokes a compassionate reader.  It is our empathy and sympathy that turns Harold into a something.

He understood that in walking to atone for the mistakes he had made, it was also his journey to accept the strangeness of others.

And this leads to one of the problems with The Unlikely Pilgrimage of Harold Fry.  That is its withdrawal from the most interesting issue in the book. Is there a single moment that we can say has defined our life? Can we read our life as if it all led up to that moment and everything changed forever after?  These questions are raised but not answered.  It’s a shame because with a little more depth the novel would be something very good rather than something very pleasant.

The Unlikely Pilgrimage of Harold Fry is a sweet book. Maybe a little too sweet at times. The New York Times described it as a sentimental choice for the Booker Longlist and I would agree with that assessment. It is lovely – really lovely, but from a literary perspective, perhaps a little wanting in some of its pages. The end of the book is by far the best part, bringing in a sadness which carries along with it a previously lacking depth. Harold is a mousy man and mousey men have feelings and longings.  However the narrative trivialized him to the point that at times I felt it was a little condescending.

He saw that people would make the decisions they wished to make, and some of them would hurt both themselves and those who loved them, and some would pass unnoticed, while others would bring joy. He did not know what would follow him from Berwick-upon-Tweed, and he was ready for that.

I don’t want to give the book a purely negative review because it was very warm and a lot of fun. There were many times I laughed out loud.  I do recommend it for some light summer reading. I guess I just wanted a little more meat with my potatoes.

The Unlikely Pilgrimage of Harold Fry is available here.

← Melancholia Non Grata: Lars von Trier and the Infinite Sadness Marc Baron – ∩: Outsider music at its most outside →