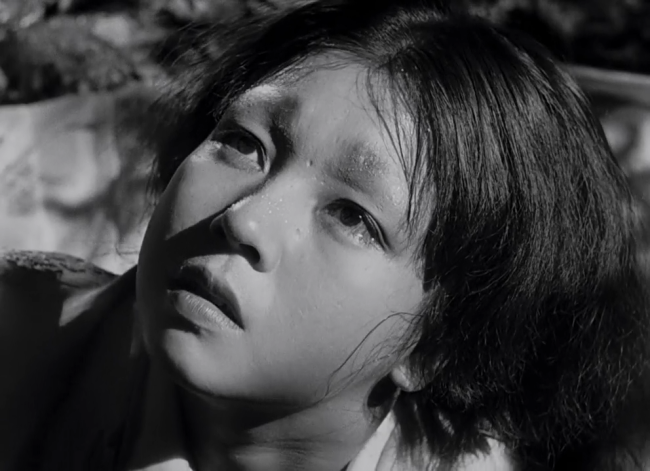 “Human beings are unable to be honest with themselves. Even the character who dies cannot give up his lies. Egotism is a sin [and] the human heart itself is impossible to understand.”

Impossible to belive I know, but I just saw Rashomon for the first time last week. It’s been “on the list” of course for a long time – I guess forever really – but I’d never actually gotten around to seeing it. Of course, by the time I had, I knew the story as well as if I’d seen the film three times. Perhaps this was a problem that allowed me to put the film off for so long?  And yet nothing prepared me for the power of the film, the intensity of the narrative and the sublimated brilliance of Akira Kurosawa. This is a powerful film with as many layers as the human psyche itself, and yet at the same time it is simple, replying on the potency of our own ability to self examine to give it all its depth.

Rashomon opens with a priest, a woodcutter, and a peasant taking refuge from a downpour beneath a ruined gate in 12th-century Japan. The priest and the woodcutter, each looking stricken, discuss the trial of a notorious bandit for rape and murder. As the retelling of the trial unfolds, the participants in the crime — the bandit (Toshiro Mifune), the rape victim (Machiko Kyo), and the murdered man (Masayuki Mori) — tell their plausible though completely incompatible versions of the story. In the bandit’s version, he and the man wage a spirited duel after the rape, resulting in the man’s death. In the woman’s testimony, she is spurned by her husband after being raped. Hysterical with grief, she kills him. In the man’s version, speaking through the lips of a medium, the bandit beseeches the woman after the rape to go away with him. She insists that the bandit kill her husband first, which angers the bandit. He spurns her and leaves. The man kills himself. Seized with guilt, the woodcutter admits to the shocked priest and the commoner that he too witnessed the crime. His version is equally feasible, although his veracity is questioned when it is revealed that he stole a dagger from the crime scene. Just as all seems bleak and hopeless, a baby appears behind the gate. The commoner seizes the moment and steals the child’s clothes, while the woodcutter redeems himself and humanity in the eyes of the troubled priest, by adopting the infant. 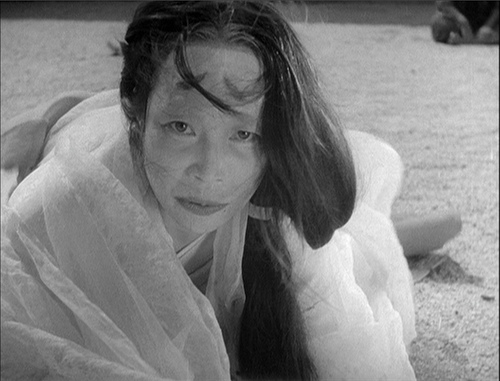 Much of the power of the picture—and it unquestionably has hypnotic power—derives from the brilliance with which the camera of director Akira Kurosawa has been used. The photography is excellent and the flow of images is expressive. Likewise the use of music and of incidental sounds is superb, and the acting of all the performers is aptly provocative. Machiko Kyo is lovely and vital as the questionable wife, conveying in her distractions a depth of mystery, and Toshiro Mifune plays the bandit with terrifying wildness and hot brutality. Masayuki Mori is icy as the husband and the remaining members of the cast handle their roles with the competence of people who know their jobs.

It’s been over sixty years since this film was made. Perhaps the use of Ravells “Bolero” looks a little OTT now, and the existential angst of the three men going over the tragic tale is a little theatre-esque.  Maybe this is so. However the brilliance of a film at this time questioning male heroism and female purity is brave well beyond its day and makes up for any aspect of the film that occurs as a little dated. This is not a simple tale of a woman claiming rape and a man claiming he didn’t do it. The stories are so beautifully complex, that even within each narrators own tale, each is condemned and acquitted.

Rashamon is often approached (especially these days with so much already said about the film) with the idea of deciphering what happened in the woods that fateful day.  However, the accounts are so divergent that such an approach seems doomed to futility. Rashomon isn’t about determining a chronology of what happened in the woods. It’s not about culpability or innocence. Instead, it focuses on something far more profound and thought-provoking: the inability of any one man to know the truth, no matter how clearly he thinks he sees things. Perspective distorts reality and makes the absolute truth unknowable.

All of the narrators in Rashomon tell compelling and believable stories, but, for a variety of reasons, each of them must be deemed unreliable. It’s impossible to determine to what degree their versions are fabrications, and how many discrepancies are the result of legitimate differences in points-of-view. It’s said that four witnesses to an accident will all offer different accounts of the same event, but there are things in Rashomon (namely, that each of the three participants names himself or herself as the murderer) that cannot be explained away on this basis. And the impressions of the “impartial” observer further muddy the waters, because, despite his protestations that he doesn’t lie, he does steal and therefore we trust his tale the least.

In the end, we are left recognizing only one thing: that there is no such thing as an objective truth. It is a grail to be sought after, but which will never be found, only approximated. Kurosawa’s most brilliant move in Rashomon is never to reveal what really happened. We are left to make our own deductions.  Not knowing remains a source of fascination, not one of frustration, and therein lies Kurosawa’s greatest achievement. 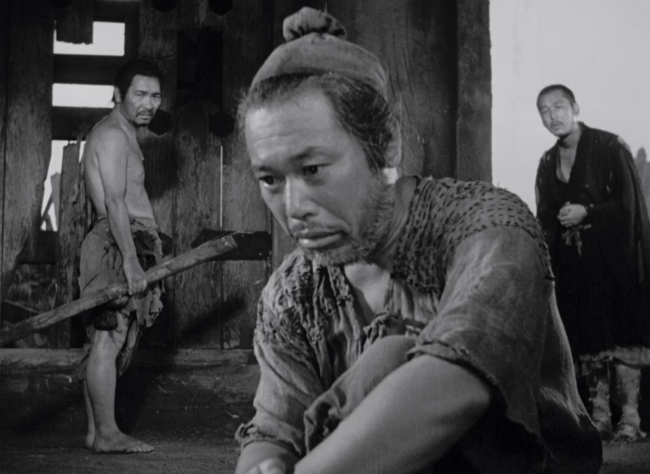