Easily my most challenging moment of the Sydney Film Festival was Alexander Sokurov’s Faust – a film I billed as the best of the festival until I saw Holy Motors, which for me just nudged Faust to the side. In some ways the two films are very similar, taking a dystopian, ultra contemporary view of an old tale of the fate of man and his dealing with his own problematic existence.

Billed as the final part of Alexander Sokurov’s tetralogy on the nature of power, Faust is the most difficult of the four films, which includes the Russian director’s vision of Adolf Hitler (Moloch), Vladimir Lenin (Taurus) and Emperor Hirohito (The Sun.)  Drawn from literature rather than history, Faust raises the power stakes to an epic struggle between a man who thirsts for intellectual dominion and the Devil himself. 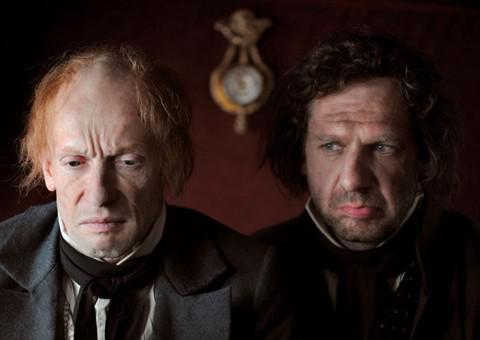 True to the literature style theme, however, Sokurov performs a kind of internal deconstruction on the famous tale, providing us with a Faust ( Johannes Zeiler) who has little to recommend him but his ego and his ambition and a Devil (Anton Adasinskiy) who can be easily overcome if one could really be bothered – but which Faust ultimately couldn’t. Faust has a vaudevillian component to it as the two rather repulsive characters dance their way through the village the simple and the commonplace bringing out the worst in each of them. The Devil never really convinces the rather intelligent Faust of any of his perspectives.  Faust goes along out of a weird compulsion to give over his will and his powers of lucidity. IN other words, Sokurov’s Faust gives in to the Devil simply because resistance is just too hard. 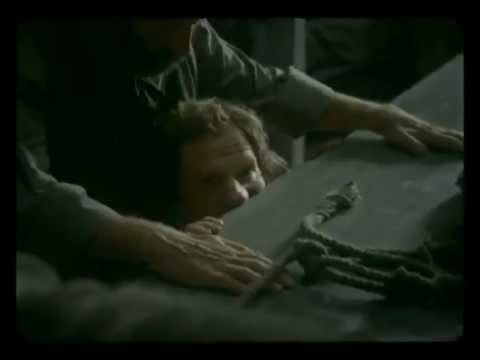 The film opens with an awe-inspiring CGI descent from the heavens to a bustling, stone-paved German town. The costumes and sets don’t connote a definite time, which could be anywhere between Shakespeare’s day and the early 19th century.  We are then faced with grisly scenes of Faust directing human bodies under the guise of scientific discovery – corpses are shown from the penis up, intestines spilling on the floor in a voluminous gush. He is applauded and adored by his significantly intellectually inferior assistants before whom he shows off about not being able to find a “soul” and not believing in any sort of God. ( “the God who shakes me inside is powerless outside of me.” cries one) However, we soon find that Faust can’t even afford to pay the grave robbers and that he runs to his father to beg for money. When he is refused money from his father, he wanders around his own village mumbling and grumbling that he has no money and is hungry.

Torrents of dialogue pour out, making it necessary for non-German speakers to speed-read through cascading subtitles. This is far from a dull, academic work and the fast-paced talk is matched by swiftly changing scenes full of vibrant visuals. Life bubbles out of each frame in a grungy, foul-smelling rush.  Soon Faust is forced to visit the money lender who has lots of odd trinkets in his store.  He refuses Faust any money but does get his autograph – signed in his own blood for want of ink. He gigglingly refuses to admit to being called the Devil, but soon we are presented with a scene where he is naked, and his body is a completely deformed, lumpy slice of  horror with his extremely small penis located just above his ass where one might expect to find a Devil’s tail.  Confronted with this kind of body, Faust the scientist is lost to Faust the bored hungry passive blob of a creature who will follow the Devil, even though there is not mush fun and adventure to be had from doing so. 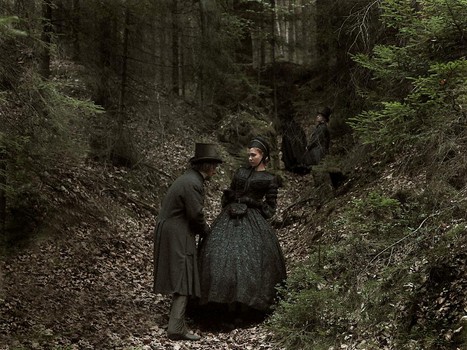 They descend into an underground tavern where Faust is egged on to kill a young soldier. The dead man unfortunately turns out to be the brother of Margarete (Isolde Dychauk), an ethereal looking young girl who Faust lusts after the moment he lays eyes on her. Again, their meeting at the boy’s funeral is more comic than romantic, and in the end the girl doesn’t need much convincing to spend a night with her brother’s murderer, while her drugged mother sleeps in the bed beside them. Everyone, the devil notes, knows exactly what leads them to hell — and they do it anyway. No more is heard of Margarete after this; for more information about her fate, read the book. Sokurov is interested only in his hero and his challenge to the greatest Power of them all. Actually heaven is pretty much out of the picture (“Good doesn’t exist,” says the devil, “but evil does.”) The final scenes reserve some surprises after the devil, having kept his side of the bargain, claims Faust’s soul and drags him to the boiling, gushing craters of hell, shot in Iceland around dramatic geysers. (Deborah Young)

The trick to disecting this film lies in the cinematography and the production. A square frame provides the oppression all the characters live under.  Delbonnel’s painterly lighting effects are often quite breath-taking, as in the dissecting and bathing scenes; other shots are disconcertingly tilted and foreshortened, as though widescreen was being forced into a narrow format. No one has much trouble making things happen; making ends meet, and no one has much fun refusing to do these things either. Colour is dusty – only the red of the blood provides any vibrancy. The sets are cluttered making it look as though the characters are perpetually climbing all over each other as if they lived in an ants colony. The answer to Faust’s ennui that manifests itself in its most extreme form (hunger) is in observation. But not the scientific observation of the body and the world around him. It’s god that’s missing from this narrative – the god in Faust. It is up to Faust to bring humanity to the difficult task of being human and it is exactly that Faust refuses to do.  Following the devil is just something to do to pass the time. Dialogue has been overdubbed in the studio which gives a slightly disembodied feel to the sound, highlighting Faust’s isolation and loneliness – feelings he will playfully ignore rather than face. In fact every aspect of being human will be playfully ignored by Faust. If this is a film about power – it is about our refusal to accept power over ourselves. 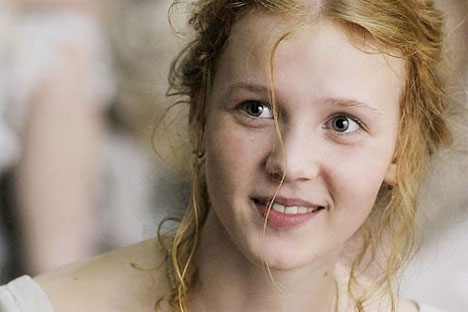 This is no mere retelling of a great tale.  Sokurov claimed this was a reading between the lines, and that is what you get here.  If you don’t know the story you will need it before you go in because there are few narrative footholds, and it is a film worth investing some intellect in.

For me it was the standout at the festival this year. It also won the Golden Lion at the Venice film festival so, even though I am sure audiences will be divided by this film, I”m not the only one who was blown away.

← My son My son what have ye done – Lynch and Herzog team up. Maajun – French prog 70’s style with a tiny bit of everything else. →