The overlaying theme of todays little additives is experimental – but where these guys took that is not into the now rather clichéd world the previous decades of beloved records were taking them. Sure Royal Trux (sigh) had the free jazz undertones, Conlon Nancarrow has electronica sourcings, Fingers say thanks to soul, and if you can’t hear the prog in 不失者 then your deaf – but this gang go in wild new directions. We’ve hit the 1990’s now and a little ennui with experimental is producing some very nice wild ride forays into music that will have a profound influence for the next twenty years (at least at this count).  You’ll hear some of the best of the best in certain genres here today, the birth of music that will change generations.  Have a great time.  As always with this list broken down – some of my all time favourite albums are here!

For the previous posts, go here.

HOW freaky cool is this?  The Wire list proclaims Another side by Fingers Inc. to be the first and the best house album ever released. Even today it sounds fresh. This sexy combination of other worldliness and intimacy is nothing like the disco / soul-centric dancefloor ear candy we’re used to from house. This album is essential listening, it is prime example of how timeless deep house can be. Fingers Inc was a Chicago House group that consisted of Larry Heard, Ron Wilson and Robert Owens. Apparently their track “Can You feel it?” became a huge anthem during the summer of love of the late 1980′s and was responsible for people being involved in mass cuddles and hugs in fields all across the countryside. Fast forward over twenty years, and the depth of the soulful emotion in this music can still be tug your heart-strings, and it will do in another twenty years time, this is classic house music at its finest.  The Acid House have a nice write-up and some handy links if you want to listen to more. AS far as I can tell, there’s no re-release at this point and the album has fallen intot he pricey end of the market.

You’ve gotta hear what Wire had to say about this one:
Until the 80s, Nancarrow’s extraordinary music was almost completely unknown. These digital recordings made in his studio in 1988 – replacing a less complete LP set – helped gain a wider audience. Nancarrow was an avant gardist who almost exclusively used the 19th century technology of the player piano: in the 1940s there was no available electronic alternative for achieving a complex “harmony of rhythms” unplayable by human musicians. The early studies have a blues, boogie woogie or jazz influence, and the very first, from 1947, sets the pattern – like a demented five finger exercise with voices converging from impossible directions and dropping away at the close, the lines in dizzying rhythmic counterpoint. Nancarrow developed serial techniques independently of Boulez and Babbitt, but the chaotic energy of many studies recalls free improvisation. In his painstaking way Nancarrow achieved the rhythmic effects of electronic music in a completely self-contained medium. This is also some of the most hilarious ‘pure’ music you’re likely to hear.

This is one wild ride, and another of my favourites off the list. Give me de-constructed sound any day – I love the hysteria and the play in this album and I love the devotion to what is available through electronica. Composer György Ligeti described the music of Conlon Nancarrow as “the greatest discovery since Webern and Ives… something great and important for all music history! His music is so utterly original, enjoyable, perfectly constructed, but at the same time emotional…for me it’s the best music of any composer living today.”

Its rare that I get really excited about living “at the ass end of the world” as one of our former Prime Ministers described life in Australia a couple of decades ago. But music like this makes me feel like shutting all things northern out and letting south life-love in deep. This is a New Zealand band wrestling with the implications of punk-primitive aesthetics in the wake of US/Euro free jazz ground leveling. Things are definitely murky on Trapdoor, and while that’s the case with just about any Dead C release one could name, there’s something even more mixed down and subliminal here: things that sound like — but might not be — random TV interview snippets on the first version of “Bury,” or, throughout the CD, the general aura of sonics that sound like radio signals distorted and trampled through the mud. The second take on “Bury,” subtitled “Refutatio Omnium Haeresium” (which alone pretty well shows that Bruce Russell is part of the band), is the disc’s understandable centerpiece. Fifteen minutes long, with slowed/distorted vocals everywhere and a wonderful sense of looming, mysterious contemplation in the flow of dank guitar noise up and down over Robbie Yeats’ distant drumming, it’s a fantastic effort. An interesting coda concludes the disc — acoustic versions (!) of three tunes, “Power,” “Bone,” and “Mighty.”  Check it out if you can.  Copies of this are also hard to come by in certain incarnations. Because the “first” recording was done on cassette and subsequent recordings changed, it’s a trick getting to the source. But really worth the listening ride.

Royal Trux – introduced to me on this list – is another “moment” I simply never got over. ANOTHER favourite of mine from this list (OMG – LISTEN to that!  How can anyone not adore this album?) Anything that sources from free jazz finds a throwback Darwinian gene in me, but when a deconstructed rock  ‘n roll is added to the sublime mix, this little girlies in heaven. Jennifer Herrema’s drug-fucked vocals forever threaten to fall off the precipice and drown in an ocean of out there and Neil Hagerty’s promise of  “harmolodic rock ‘n’ roll” infuses the anti-rock with (as Wire say) improv noise and its own logic.  Atonal vocals, drums, boiling synths and ragged guitar lines collide, often in different metres.  Its a lust driven, suck-it0up affair where pretty much anything goes while the reins are tight enough to give it some knowledge and resonance within the world of uncompromising avant garde.  Love love love this record!

This is what Wire have to say about this remarkable trio: It was the emergence of Keiji Haino in the early 90s that really opened up the contemporary Tokyo scene to the West, a scene primarily concerned with glorious guitar reinvention; pushing individual and group expression to the extreme; and making huge leaps of rock imagination. Their geographical position alone gave them, like the Krautrockers, much more of an outsider’s view of the ‘classic’ Western rock canon. Here, the likes of Blue Cheer or Arthur Doyle – not exactly household names – figure as the most influential artists for new Japanese music. DBL Live still stands as the scene’s crowning document – a sprawling double CD set that sounds so otherworldly and unprecedented, the rest of the world is still trying to catch up. From static and forlorn proto-Gregorian howl, minimal feedback hiss and spectral six string tremblings through ridiculously overdriven guitar destruction in the space of 50 minutes, Haino’s power trio redefined the leftfield forever.  Wild wild ride. 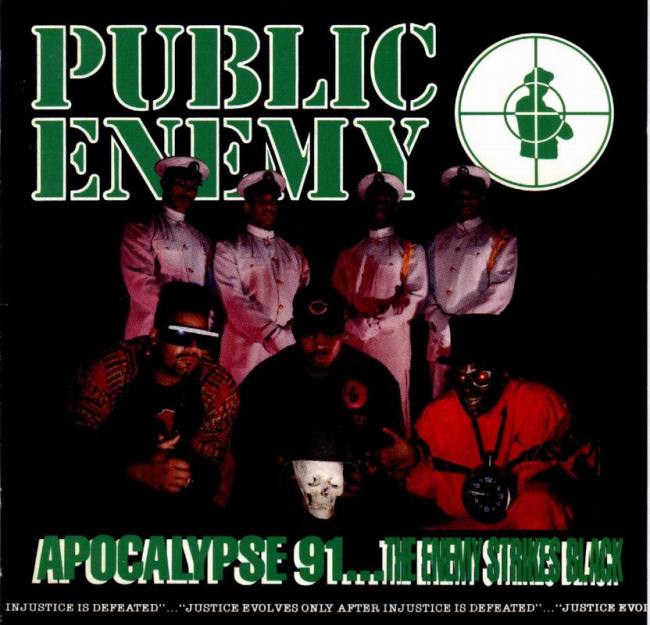 One of the few bands on the Wire list I had actually heard of before and was familiar enough with their early work to have been influenced by it. Shut ’em Down (above) is for me PE at their absolute best.  The album title refers to the film Apocalypse Now and Star Wars Episode V: The Empire Strikes Back. The singles released from the album were “Can’t Truss It”, “Shut Em Down” and its B-side “By the Time I Get to Arizona” (samples “Two Sisters of Mystery” by Mandrill and a live version of “Walk on By” by the Jackson 5), in which Public Enemy was depicted in the video killing the Arizona governor, Evan Mecham, who refused to recognize Martin Luther King, Jr.’s birthday as a national holiday. The album also included the thrash cover of their earlier hit “Bring the Noise” featuring Anthrax and “Get the Fuck Outta Dodge” – a previously released B-Side to the “Can’t Do Nuttin’ for Ya Man” single from Fear of a Black Planet.  I’m always struck by the cute post that tells me white people like black music that black people don’t listen to anymore – I can’t help being a white middle class lassie – it was decided before I was born! I often feel a little like a trespasser engaging with music like this. But I can’t help it – PC be damned and my white guilt can fuck off. Music rules, and the music is great, no matter what colour my ears are.