SFF: Holy Motors – Leos Carax and the question of Free Will

Up until last night, Faust was the best film I had seen at the Sydney film Festival  – a film I have yet to review on the blog here.  That’s all changed after seeing Holy Motors. This is easily the best film of the festival. To award it the Palm d’ Or would have been a brave move – but a  just move. It should have won.

Leos Carax wrote, directed and performed in this film. It stars Denis Lavant who was mentioned as Carax’s “muse” in the film introduction last night.  Lavant will perform the roles of many different characters throughout the film, next to his co-star Edith Scob and the rest of the cast (Kylie Minogue, Eva Mendez, Michael Piccoli, Katarzyna Glinka, and Carax himself) will play supporting roles in one of these scenes.

Holy Motors opens with a most amusing scene of a film audience staring into the screen.  We are a film audience staring into a screen,  so it is a mirror image of ourselves – cleverly conceived so that for a brief moment it does appear that we are looking into a mirror. Flash to a man in a hotel room. He moves toward a wall in the room wallpapered in a forest design. He presses his fingers against the design, searching for something. Soon he has found it and one of his fingers extends into a mysterious key. He slips it into the wall and presses through till a doorway lets him into the very cinema we saw in the opening shot. He is facing the screen and as he stares into it, the camera moves toward it also.  The film proper begins with a business man walking to work – the same man who found his way into the cinema to watch.

And in some way this is an indicator that we are watching ourselves watching a man who is watching himself within a film. I say in someway, because this film is both a challenge and an assault on interpretation. It is a film that wants (begs) to be interpreted however at the same time Leos Carax will refuse to force feed us anything to assist in the deciphering of our sensory experience. Here (at last) is an uncompromising film maker who plays to and speaks to the best inside of us.

Monsieur Oscar (Denis Lavant) is a man who travels around in the back of a limousine meeting his various “appointments” during the day. I’ll try to leave out the plot line (sparse though it is) because part of the power of the film is knowing nothing of what will happen next – the view needs to have the film creep up on them as Carax has intended. He is driven by Celine, and employee of the strange company called Holy Motors.  It soon becomes clear the appointments are not what we would expect, and soon the question is posed to Monsieur Oscar, by a mysteriously appearing Michael Piccoli, “What makes you do this Oscar?” It is a question the audience have grown inside of them by this point (about half way through the film) and one that Monsieur Oscar answers with “What made me start: The beauty of the act.” 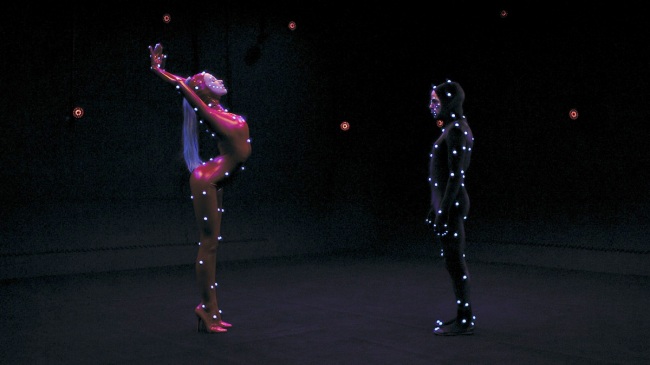 This for me is one of the key points of the film, and if there are clues as to what Holy Motors is about, that is one of the larger ones. The beauty of the act questions the notion of free will, via the philosophical concept of Action theory.  Basic action theory typically describes action as behavior caused by an agent in a particular situation. The agent’s desires and beliefs (e.g. my wanting a glass of water and believing the clear liquid in the cup in front of me is water) lead to bodily behavior (e.g. reaching over for the glass). In the simple theory the desire and belief jointly cause the action.

For example, throwing a ball is an instance of action; it involves an intention, a goal, and a bodily movement guided by the agent. On the other hand, catching a cold is not considered an action because it is something which happens toa person, not something done by one. Generally an agent doesn’t intend to catch a cold or engage in bodily movement to do so (though we might be able to conceive of such a case). Other events are less clearly defined as actions or not. For instance, distractedly drumming ones fingers on the table seems to fall somewhere in the middle. Deciding to do something might be considered a mental action by some. However, others think it is not an action unless the decision is carried out. Unsuccessfully trying to do something might also not be considered an action for similar reasons (for e.g. lack of bodily movement). It is contentious whether believing, intending, and thinking are actions since they are mental events. 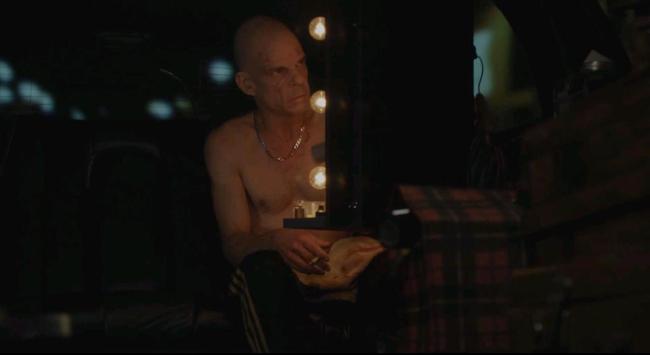 Monsieur Oscar acts. He acts in every sense of the word.  He takes specific decisive actions that are powerful and instrumental in the lives of others he interacts with. However, he also “acts” in that he is a performer, who applies makeup in order to appear as the character and who slips in and out of roles – in the day we follow him, it is 9 different roles in the day. Unlike an action in action theory, his actions are determined by files he receives that tell him how to dress and what actions to perform as that character. We are never sure if Monsieur Oscar is in his own life, in a series of lives that belong to him, or performing as a hired hand in the lives of others. His “acts” in no way imply free will, rather they are the predestined behaviours from what Lacan would call an external “Big Other” that he has chosen to “follow.” HOwever even that choice – like our “choice” to work, is one that is forced upon us by the society in which we live.

As the film progresses Monsieur Oscar indulges in behaviours we all recognize. He starts to get tired and lose enthusiasm. He drinks heavily, eats poorly and smokes too much of a variety of substances. Behaviours we recognise in our own life. Are these behaviours small act of rebellion or an attempt to escape a treadmill of behaviour chosen for us? Like so much in this film, it is left up to us to decide. 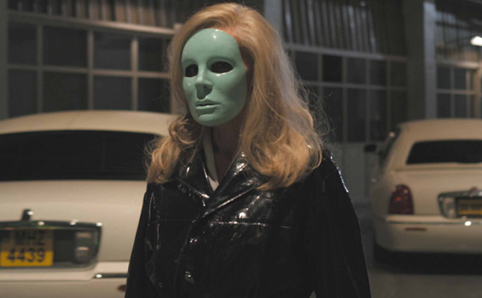 Other than the philosophical aspects of Holy Motors, it is all the things everyone says. There are multiple nods to great cinematic moments – Tron has been mentioned in almost every review I have seen so far, and of course the great Edith Scob who played the Doctors daughter in Franju’s Eyes without a Face, dons a mask identical to the one from that film and makes her way home at the end of the film. There are lovely little tributes like this dotted throughout. Kylie and Denis’ scene is a re-enactment of Hiroshima Mon Amour for example. I have read that Carax is a great fan of the French New Wave, which would explain my attachment. It is nothing you expect, taking you on twists and turns that boggle and confound, and yet at the same time are cohesive and pure sensory delight. This is not schlock tossed together piece of nonsense. Holy Motors is a brilliant film, held firmly under the control of a wonderful director who wants us to think a little deeper.

← SFF: Barbara – Christian Petzold asks do I go or do I stay. SFF: On the Road – Salles takes Kerouac for a spin →