Home » Film Reviews » SFF: Beasts of the Southern Wild – A film for the Bourgeoisie.

SFF: Beasts of the Southern Wild – A film for the Bourgeoisie.

Posted by lisathatcher on June 9, 2012 in Film Reviews | 5 Comments

It’s difficult to talk about films like this – films that create a lot of buzz, are very complex in their multiple themes, and rely very heavily on the advantages of context. Overall, I would have to say I didn’t like Beasts of the Southern Wild.  I found it arrogant, preachy and patronizing.  Having said that, there are some interesting elements to the film which make it compelling and are the primary reason for its popularity.

In a forgotten but defiant bayou community cut off from the rest of the world by a sprawling levee, a six-year-old girl exists on the brink of orphanhood. Buoyed by her childish optimism and extraordinary imagination, she believes that the natural world is in balance with the universe until a fierce storm changes her reality. Desperate to repair the structure of her world in order to save her ailing father and sinking home, this tiny hero must learn to survive unstoppable catastrophes of epic proportions.

The tough-minded local schoolteacher instructs the kids about how they’re all simply meat, just like all the other creatures that surround them, and while Hushpuppy firmly believes that everything in life is interconnected, she’s warned by the teacher that, “Any day now, the fabric of the universe is coming unraveled.” While this sort of statement might suggest an imminent big ecological lesson, the forecast seems entirely organic to a place that was so recently ripped apart by Katrina and where outlying areas are diminishing in size at an astonishing rate. 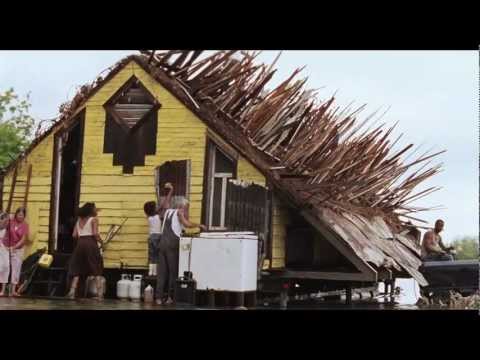 This is a film made for the white middle class. Its interesting, where the auteurs of the French New Wave poked fun at the bourgeoisie, these days “indie” filmmakers (can you REALLY be an indie film maker when you run a fashionable film production collective in New York City?) embrace the white middle class, making them feel comfortable, feeding their guilt with images that suggest “don’t worry – we know it’s not YOU that is the problem.”

That for me sums up Beasts of the Southern Wild. It’s a feel good movie in the worst possible way.  It is a metaphor for Hurricane Katrina and the political problems surrounding that, but sucking up to the “but-I-hated-the-hurricane-katrina-stuff” set, in that it shows the abandoned “lower classes” as survivors, and those for whom stoicism and unity is more important than political aide. They reject the world just as the world has rejected them.  I have a feeling this is a far cry from how the people who suffered in that region really feel – but hey!  I could be wrong. This is also a pop-Darwinism film, portraying everyone as beasts who reject pursuits of the mind (oh – except science of course) in favour of a romantic vision of themselves as “beasts” – as natural and “beast-like” as the chooks they eat or the fish they hunt. Finally – if we haven’t had enough PC to last us a lifetime just yet – it’s also about global warming, the melting ice a metaphor for the unleashing of our worst fears; something the female child star lead will have to face as the film unfolds. 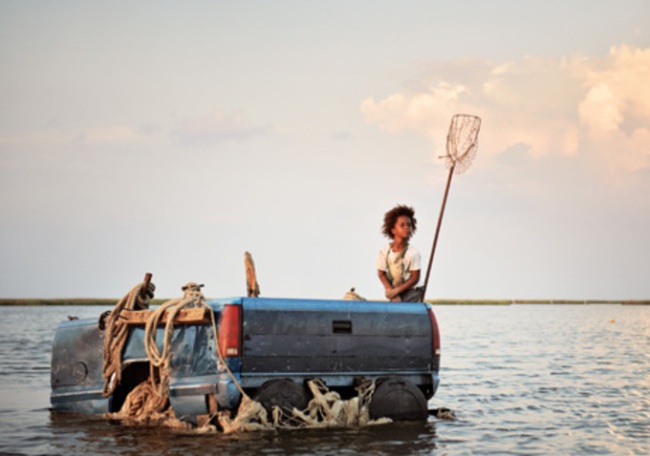 In other words, a film pandering to the white pseudo-intellectual middle class.  I can’t imagine any working class individual getting anything out of this film.

The films style also attached itself to current contemporary “norms” – the world they live in looks as though it fell out of Jean-Pierre Jeunet’s Micmacs and Hushpuppy’s internal dialogue is a situational Juno-esque happy romp through cutsey-poo jargon and adorable phrasing.  I have read that it is unlike any other film every made, but I didn’t come out of the film with that experience. For me it had strong elements of every popular indie film made in the last ten years, and again, unashamedly pandered to this.

Quvenzhane Wallis and  Dwight Henry, two non-professional actors (another very trendy move at the moment) are good in their roles, with Wallis being as cute as she is expected to be and Henry being of enough mixed morality for good white folk to think its authentic. I confess I had some moments of discomfort when African-Americans were encouraged to “beast it up” for the camera – but that could be my own white guilt.

All-in-all I really wanted to like this film, but I guess I felt so manipulated it just wasn’t possible.