Posted by lisathatcher on June 4, 2012 in Music Reviews | 2 Comments

The point of the Wire’s 100 Records that set the world on fire while no one was listening is that no one was listening and several of the folk on today’s segement of the list have become “huge-after-the-fact”.  Arthur Russell was virtually discoverd after his death, his influence being spread over and throughout the music world and of course, The Homosexuals, under the spiritual guide of Bruno Wizard have been through various reincarnations since the amazing birth period in 1978 that we talk about below.  Still, even if some of these talents HAVE actually managed to make the world listen, they still belong on the list of music that was really changing the world.

The Homosexuals are a punk band formed in 1978. They were born out of the ashes of The Rejects. The name ‘The Rejects’ was too deeply embedded in what Wizard regarded as “the new conformity of Punk”. For the new name, “Homo” equals men of the same sex; “rock” equals sexual; men of the same idea in ancient Greece discussing art, music, literature, astronomy, science equals The Homosexuals. David Dus, sensational drummer that he was, could not hack being in a band called The Homosexuals and duly left. Jim Welton, later to be immortalized as L. Voag, Amos, and Xentos, thought it better to call the band ‘The Non-Homosexuals’ and stayed, and Anton Hayman agreed on the genius of the name. The band then lived in a series of squats, all the while making music and recording. Bruno Wizard refused to perform on “the circuit” and thus, The Homosexuals only ever did a handful of gigs. The band’s work during this period would lead to their recognition as a pioneer of D.I.Y., along with such bands asThis Heat, Desperate Bicycles, Swell Maps, et al.

With a stunning in-your-face start like that, it’s no wonder they went on to push boundaires – in every sense of the word.  Embracing obscurity, they released very little in their life time and most of what did get released was on small-run vinyl only with obscure record labels. Their angular guitars, complex melodies, and experimental leanings distanced them somewhat from the punk rock being created by their contemporaries and has cemented their reputation as a pre-cursor to post-punk.  The music is bold, punk-thrash, ticklish and intelligent.  A complex listening expereince that rewards you many times over. (I LOVE THIS ALBUM)

I”ll get the Wire list to reveal the power behind this one. I can hear it in these stunning voices and the border crossing universality (can’t you? – it’s great listening) and the Wire says it all better than I can: While N’ Set Fik is probably the closest that raj, or any other form from the Islamic world, will get to approaching the verities of Western pop music, such a dizzying, swooning record could never have emerged from the Anglo-American tradition. Chaba Fadella’s comeback record after a sabbatical raising her children, N’ Set Fik expresses commitment with a drive that has only ever signified wandering lust since Charley Patton and Jimmie Rodgers first claimed that they were pistol-packin’ daddies 60 years ago. Needless to say, the closest you will come to hearing such a complete surrender to ecstasy in Western pop music is a Massive Attack or Bally Sagoo remix of Nusrat Fateh Ali Khan. 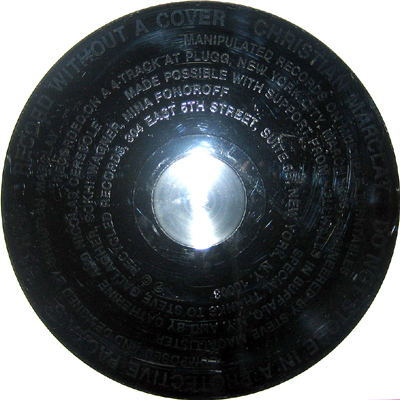 Record Without a Cover

Everything on this list is amazing, but this is amazing amazing.  Christian Marclay’s fascination with pop culture has led to the creation of both collage works and art objects, as well as his video and sound pieces. His first recorded “release,” produced and distributed by Marclay himself,  Record Without a Cover (1985), collapses the boundaries between sound and art. This piece was a regular vinyl LP distributed without a cover so that it would remain vulnerable to all surfaces and people it came into contact with. One side contained an etching, while the recording on the 2nd side of the album was a collection of samples and selected works by Marclay. Collectors of the LP were instructed not to store the album in any protective sleeve so that each object would remain individual, marked by their own “historical trajectory.”  Fantastic Idea, amazing amazing work of art.

Charles Arthur Russell, Jr.  was an American cellist, composer, singer, and musician whose work spanned the genres of classical, disco,experimental, folk and rock.

Although he found the most commercial success in the dance music genre, Russell’s career bridged New York’s downtown, rock, and dance music scenes. His collaborators includedPhilip Glass, David Byrne, and Nicky Siano. Relatively unknown during his lifetime, a series of reissues, compilations, books and a biographical documentary have significantly raised his profile in the 2000s.  Russell was prolific, but was also notorious for leaving songs unfinished and continually revising his music. Ernie Brooks said Russell “never arrived at a completed version of anything.” Peter Gordon stated, “his quest wasn’t really to do a finished product but more to do with exploring his different ways of working musically.” He left behind more than 1,000 tapes when he died, 40 of them different mixes of one song. Wire says: One of the least-honoured links between disco and the avant garde, Russell, a cellist whose experiments were too much for the Manhattan School of Music, wa making connections between the formats as soon as he hit New York in the mid-70s. Though not his first release, World Of Echo – for solo cello, voice, effects and electronics – encapsulated many of his ideas for loose-limbed music that kept curiosity at its heart. Echo remains an extraordinary record: sonar rhythms and melodies drift through various layers of sound and meaning, like a metaphor for the unconsciousness.