Posted by lisathatcher on May 9, 2012 in Music Reviews | Leave a comment 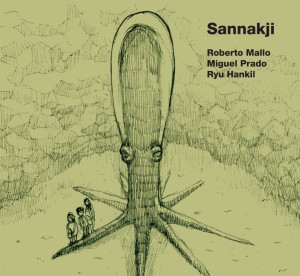 In the lovely notes to this amazing cd on the TMTG website the following is related:

In his first days in spain we recorded with Ryu two improvised pieces. His sounds of mechanical bumps were well known to us, but he did not know our way of working.
Taking advantage of these circumstances, and being aware of how the result is determined by our materials, would be interesting to think about how instead of imagining three subjectivities projected with the aid of materials, think about how, objective determinations of the materials, their eigenfunctions, its immanent way to operate, was a process of de-subjectification of the peculiarities of each one of us, allowing sound to be created almost by accident between the materials themselves.
Think that the result of these improvisations is not the result obtained from an improvisation; This it´s the sound of weird objects that we have not been able to completely abandon their driving, but they argue against our own self-realization of individual artists.

I love the idea of “weird objects… arguing against our own self-realization.”

What I glean from the notes  – read and reread while listening to this incredible couple of tracks – is the attempt for the artist to be subverted on behalf of the sound.  This is a concept that runs in the face of nihilism; a negation of the imposition of meaning in the face of what is. This two track disc is the documenting of the first meeting between these great artists as a trio.

What does it mean to say that an object can subvert the role of the musician? How can the object facilitate the incursion of a different imaginary? Through Freud and Lacan we hold the imaginary to be an off shoot of the super ego, and this is a hardwired process that is thought to be difficult to interfere with, and changes only reluctantly over generations.  Yet cultural history places a high premium on the cognitive and epistemological changes made possible by (as well as other things) significant and technological and communicative developments.

But isn’t that what we have here?  A transmorphing of sound into communication using the reality of language and its impact on defining and shaping our world, to subvert the artist and force (in this case) him into an alternate communication that redefines his very shape? Somehow through this process the imaginary ceases to be a permanent faculty and becomes susceptible, via the use of object instrumentation, in its ongoing negotiations between the Symbolic and the Real.

Sannakji, with its intricately laced beauty of sounds , some recognisable and others not so (the music includes a beautiful use of tape being yanked off its reel) may not be the complete image of the above process, but it is a definite step in the process arriving at a new musical language. I find the artists efforts to sublimate themselves to the objects and their sounds admirable and exciting.  it can be heard in the tracks and makes for an intense and gratifying listening experience.

This amazing disc can be picked up at Erstwhile.

I’m having a bit of trouble with my embedded player at then moment. I will add a sample here as soon as I can get it sorted.

The mechanics of it are thus:

Recorded and mastered by Roberto Mallo at TE in A Coruña in February
2010.

← Hear O Israel: A Prayer Ceremony in Jazz or How to keep the young at the synagogue. Ray Russell Quartet – Dragon Hill: Avant Garde tipping off the edge of trad. →